Iron Butterfly is an American rock band best known for the 1968 hit "In-A-Gadda-Da-Vida", providing a dramatic sound that led the way towards the development of hard rock and heavy metal music. Formed in San Diego, California among band members that used to be "arch enemies", their heyday was the late 1960s, but the band has been reincarnated with various members with varying levels of success, with no new recordings since 1975. The band's seminal 1968 album In-A-Gadda-Da-Vida is among the world's 40 best-selling albums, selling more than 30 million copies.[5] Iron Butterfly is also notable for being the first group to receive an RIAA platinum award.[6]

Jerry Penrod and Bruce Morse replaced Willis and Pinney after the band relocated to Los Angeles in 1966 and Ron Bushy then came aboard when Morse left due to a critical family tragedy[vague]. All but Ingle and Bushy left the band after recording their first album in late 1967; the remaining musicians, faced with the possibility of the record not being released, quickly found replacements in bassist Lee Dorman and guitarist Erik Brann (also known as "Erik Braunn" and "Erik Braun") and resumed touring. In early 1968, their debut album Heavy was released after signing a deal with ATCO, an Atlantic Records subsidiary. They were represented by the William Morris Agency who booked all their live concerts.

In terms of sound, the group took inspiration from a variety of sources outside of the rock arena, such as the bongo playing of Preston Epps and the rhythm and blues music of Booker T and the MGs. Around this time, the band notably met guitarist Jimmy Page, who stated that he used the group as partial inspiration for the name "Led Zeppelin". As well, one of the Zeppelin's first touring sets in the U.S. was playing with Iron Butterfly at Fillmore East in New York, New York.[6]

DeLoach subsequently recorded with Two Guitars, Piano, Drum and Darryl, while Weis and Penrod went on to form the group Rhinoceros. In 1970 DeLoach formed Flintwhistle along with Erik Brann; the band performed live for about a year before breaking up.

The 17-minute "In-A-Gadda-Da-Vida", the title track of Iron Butterfly's second album, became a Top 30 hit (edited down to 2:52) in the US and made the number 9 spot on the Dutch Top 40. The members when In-A-Gadda-Da-Vida was recorded were Doug Ingle (organ and vocals), Lee Dorman (bass guitar), Ron Bushy (drums), and 17-year-old Erik Brann (guitar). The album was awarded a gold disc by the R.I.A.A. in December 1968 [9] and had sold over three million copies by the end of 1970. It ultimately sold over 20 million copies, went platinum, and stayed on the Billboard magazine charts for over a year.

The band had been booked to play at Woodstock but got stuck at an airport. When their manager called the promoters of the concert they explained the situation and asked for patience. However, the manager demanded that the Butterfly be flown in by helicopter, whereupon they would "immediately" take the stage. After their set they would be paid and flown back to the airport. The manager was told that this would be taken into consideration and he would be called back. According to drummer Bushy, "We went down to the Port Authority three times and waited for the helicopter, but it never showed up".[10]

The next album, Ball, reached No. 3 on the charts, but more lineup changes followed. In 1970, with Erik Brann gone, Iron Butterfly released their fourth studio album, Metamorphosis with two new members, guitarist/vocalist Mike Pinera (whose Blues Image had opened for the Butterfly's Vida tour) and guitarist Larry "Rhino" Reinhardt. The album managed to get into the top 20, but Doug Ingle quit the group shortly after its release. Without an organist for the first time in their history, the remaining four members cut a single, "Silly Sally". It failed to chart and proved to be their last recording. The band broke up after playing a final show on May 23, 1971. Dorman and Reinhardt would subsequently found Captain Beyond.

The band reformed in 1974 with Ron Bushy and Erik Brann joined by bassist Philip Taylor Kramer and keyboardist Howard Reitzes. (Kramer later made news with his 1995 disappearance and the discovery of his remains and minivan at the bottom of Decker Canyon in 1999). Brann, who had done occasional lead vocals during Iron Butterfly's original run, served as the band's main lead vocalist. The album Scorching Beauty was released in January 1975 with Reitzes and Sun and Steel in October 1975 with Bill DeMartines replacing Reitzes. Both albums were criticized for bearing little resemblance to the original tone of the group, and sold poorly compared to their earlier releases.

In December 1978, the band's bassist, Keith Ellis, died in Germany. A similar loss occurred in 1985 when incumbent bassist Kurtis Teal died as a result of a heart murmur. Teal's death led the band to dissolve.

Doug Ingle rejoined the band on vocals and keyboards from 1994 to 1999. In 1997, the band did a tour of Europe with original members Ingle, Bushy, and Dorman, along with keyboardist Derek Hilland and new guitarist Erik Barnett. A DVD of live performances from the tour was released in 2008. Larry Rust became keyboardist from 1999-2005.

Guitarist/vocalist Charlie Marinkovich joined the band in 2002. Originally from Seattle, Marinkovich had played with Randy Hansen and others.[11]

German violinist, keyboardist and composer Martin Gerschwitz, formerly of had worked with Lita Ford, Meat Loaf, Walter Trout, and most recently of Eric Burdon & The Animals [12] joined the band in 2005, replacing Larry Rust.

In early 2010, an announcement was made that Iron Butterfly would receive the Lifetime Achievement Award at the 20th Annual San Diego Music Awards, which took place on September 12, 2010.[15] The award was presented by San Diego Mayor Jerry Sanders.[16] Later the same year, Ray Weston (formerly of Wishbone Ash) came in to substitute on drums for Ron Bushy after he was sidelined by health issues. In early 2012, Phil Parlapiano substituted for Martin Gerschwitz for a couple of shows, when Gerschwitz was unable to play due to his earlier arranged own solo-tour schedule [17]

Former guitarist Larry "Rhino" Reinhardt died on January 2, 2012, at the age of 63, due to cirrhosis of the liver. Bassist Lee Dorman, who had a history of heart trouble, died on December 21, 2012, at the age of 70. Both Reinhardt and Dorman were also founding members of Captain Beyond, along with former Deep Purple vocalist Rod Evans and drummer Bobby Caldwell.

Following Dorman's death, Iron Butterfly dissolved once more. Charlie Marinkovich revealed in 2013 that he had departed the band altogether and that Ron Bushy was very ill, shrouding the band's future in doubt.

At times during Bushy's recovery in 2014, he entertained the idea of putting a new Iron Butterfly band together, possibly with Martin Gerschwitz returning on keyboards and lead vocals.[18]

In late 2014 there were reports of the band reforming with a lineup consisting of Bushy, Mike Pinera, Doug Ingle Jr. on keyboards, and an unnamed bassist.[19] However, this reformation did not come to fruition and in 2015 the band unveiled a lineup consisting of Bushy, returning guitarist Eric Barnett, along with new members Mike Green (percussion), Dave Meros (bass), Phil Parlapiano (keyboards), and Ray Weston. Meros, Parlapiano, and Weston have all previously played with Iron Butterfly as substitute musicians; Meros for Dorman (in 2006) and Weston for Bushy (in 2010) respectively. At present, Ron Bushy remains a member of Iron Butterfly but is not performing due to his health concerns, leaving Weston as sole drummer for the band at current appearances.[20] 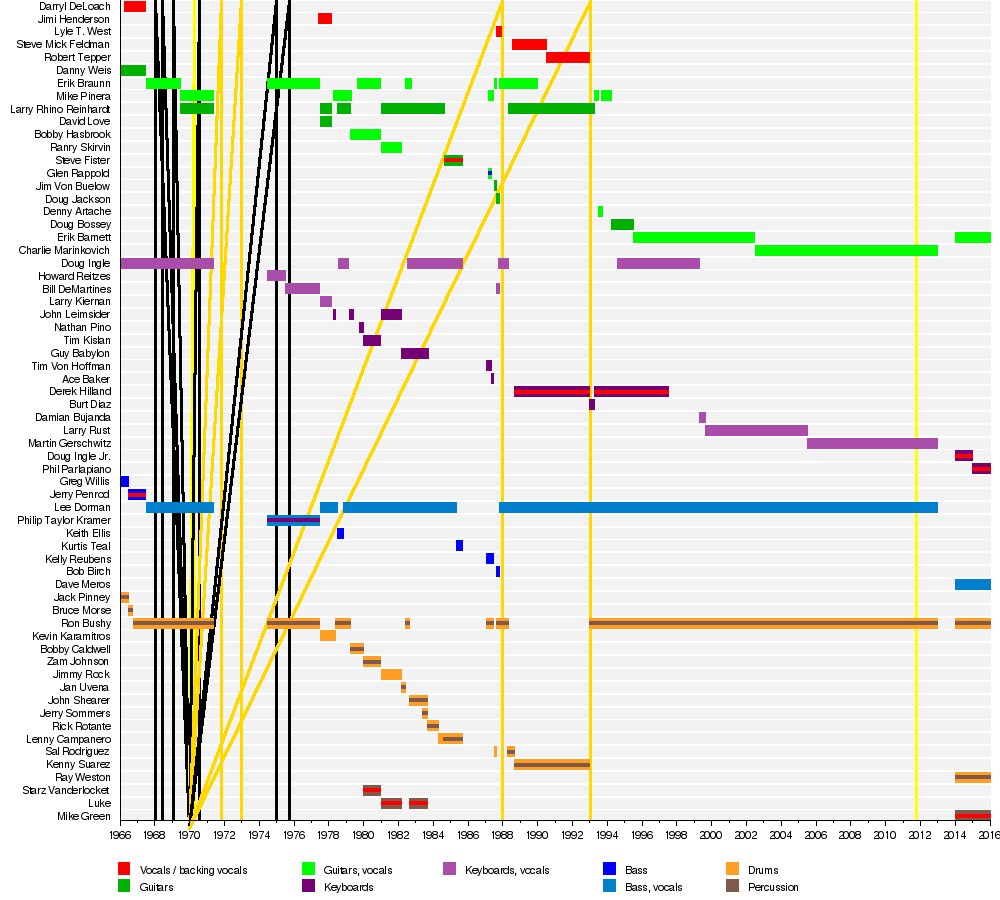