The Iron City Brewing Company (also known as the Pittsburgh Brewing Company) is a beer company that until August 2009 had been located in the Lawrenceville neighborhood of Pittsburgh, Pennsylvania, USA. On June 11, 2009, it was reported that the brewery was "moving"[1] to Latrobe, Pennsylvania. That move was recently completed and Iron City is now produced in the Latrobe Brewery that was once used to produce Rolling Rock.

In 1861, a young German immigrant, Edward Frauenheim, started the Iron City Brewery, one of the first American breweries to produce a lager, in the bustling river port known at the time as the "Smoky City."[2] This founder of Frauenheim, Miller & Company started brewing Iron City Beer, now the flagship of the Iron City Brewing Company (PBC), in a city thriving on heavy industry and commerce.

By 1866, the brewery had begun to grow. The business outgrew its original facilities on 17th Street and moved into a four-story brick building that the company built at Liberty Avenue and 34th Street, then worth an estimated $250,000. Just three years later, Iron City Brewery erected an additional three-story building at the site.

The two buildings, carrying an average stock of about 10,000 barrels, used state-of-the-art brewing equipment. At the time, 25 of the operation's 30 skilled workmen were employed full-time, and Iron City Brewery continued to expand its markets to become the largest brewery in Pittsburgh.

After the 1866 expansion, Leopold Vilsack, a Pittsburgh native who learned the brewer’s trade at Pittsburgh’s old Bennett Brewery, joined Frauenheim, Miller & Company. The young man later became a partner, investing his small wealth in the firm when Miller retired and another partner died. Iron City Brewery then became Frauenheim and Vilsack Company.

Frauenheim and Vilsack’s fame spread throughout the brewing industry across the country, as the company had built one of the most complete and extensive breweries in the United States. With a brewing capacity of about 50,000 barrels a year, the Iron City Brewery was an impressive operation, able to compete favorably in sales with any brewery west of the Atlantic Coast area. Historians and newspapers were amazed that a brewery could be so big. The total value of Iron City, from stock to raw materials, was about $150,000 – an unheard of sum for a brewery.

During the latter part of the 19th century, trusts became the business vogue, and industries began to merge or form trusts to achieve stability through size and take advantage of economies of scale. The brewing industry was no exception.

In addition to these 12 Pittsburgh and Allegheny County breweries, nine breweries outside the county took part in the merger. In all, 21 breweries joined to make Pittsburgh Brewing Company the largest brewing operation in Pennsylvania and the third largest in the country. The combined facilities, worth about $11 million, provided a capacity of more than one million barrels. Greater efficiencies and more modern equipment made it practical to close many of the 21 breweries shortly after the incorporation without relinquishing capacities.

Prohibition, starting in 1920, forced many breweries, distillers and taverns to close, yet Pittsburgh Brewing Company survived. One of only 725 American breweries left when the movement was repealed in April 1933, PBC produced soft drinks, ice cream and 'near beer' and ran a cold storage business to endure those years. The brewery’s creative efforts kept alive a Pittsburgh tradition and foreshadowed future innovations that would again restore security in times of struggle.

When Carlow was forced to relinquish control of the brewery because of Pittsburgh National City Bank’s allegations of fraud [5] (allegations which subsequently led to Carlow's imprisonment for fraud),[6] Pittsburgh native Joseph Piccirilli gained ownership of the brewery. The investment group Piccirilli represented, Keystone Brewing Company, closed the $29.4 million purchase September 12, 1995, at a hearing in U.S. bankruptcy court, showing a new commitment to Pittsburgh Brewing Company's products.

Piccirilli proved dedicated to moving the brewery into the 21st century. He prompted many new ideas, most notably the aluminum bottle. However, the company struggled with labor issues and a sharp decline in sales. (PBC had been hovering around the 1 million barrel production mark, even through rough financial times). After producing fewer than 400,000 barrels in 2005, and being late on a number of bills, Pittsburgh Brewing Company filed for Chapter 11 bankruptcy.

In 2007, the brewery was purchased and brought out of bankruptcy by Unified Growth Partners. They returned the brewery to its original name, "Iron City Brewing Company", and planned a rebound to full production.[7]

Other brands include Drummond Bros. and Drewrys, which were acquired from the Evansville Brewing Company (Evansville, Indiana) in the late 1990s and today are largely shipped to midwestern markets such as Louisville, KY, and southern Indiana. Iron City Brewing formerly held the rights for Wiedemann beer.

Iron City also brewed under contract Samuel Adams during the early years of that brand. [3] 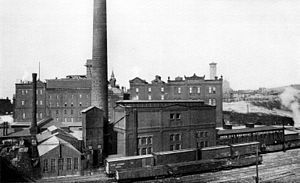