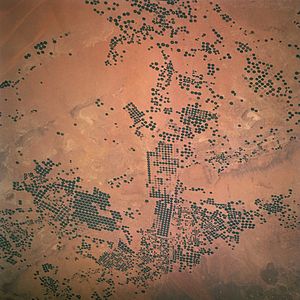 Center pivot irrigation in Saudi Arabia is typical of many isolated irrigation projects scattered throughout the arid and hyper-arid regions of the Earth. Nonrenewable Fossil water is mined from depths as great as 1 km (3,000 ft), pumped to the surface, and distributed via large centre pivot irrigation feeds. The circles of green irrigated vegetation may comprise a variety of agricultural commodities from alfalfa to wheat. Diameters of the normally circular fields range from a few hundred metres to as much as 3 km (1.9 mi). The projects often trace out a narrow, sinuous, and seemingly random path. Actually, engineers generally seek ancient river channels now buried by the sand seas. The fossil waters mined in these projects accumulated during periods of wetter climate in the Pleistocene glacial epochs, between 10,000 to 2 million years ago, and are not being replenished under current climatic conditions. The projects, therefore, will have limited production as the reservoirs are drained. Water, of course, is the key to agriculture in Saudi Arabia. The Kingdom has implemented a multifaceted program to provide the vast supplies of water necessary to achieve the spectacular growth of the agricultural sector. A network of dams has been built to trap and utilize precious seasonal floods. Vast underground water reservoirs have been tapped through deep wells. Desalination plants have been built to produce fresh water from the sea for urban and industrial use, thereby freeing other sources for agriculture. Facilities have also been put into place to treat urban and industrial run-off for agricultural irrigation. These efforts collectively have helped transform vast tracts of the desert into fertile farmland. Land under cultivation has grown from under 400,000 acres (1,600 km2) in 1976 to more than 8 million acres (32,000 km²) in 1993.