Phillip Emmons Isaac Bonewits (October 1, 1949 – August 12, 2010[1]) was an influential American Druid who published a number of books on the subject of Neopaganism and magic. He was also a public speaker, liturgist, singer and songwriter, and founded the Druidic organization Ár nDraíocht Féin, as well as the Neopagan civil rights group, the Aquarian Anti-Defamation League. Born in Royal Oak, Michigan, Bonewits had been heavily involved in occultism since the 1960s. He died in 2010.

Bonewits was born on October 1, 1949 in Royal Oak, Michigan, as the fourth of five children. His mother and father were Roman Catholics.[2] Spending much of his childhood in Ferndale, he was moved at age 12 to San Clemente, California, where he spent a short time in a Catholic high school before he went back to public school to graduate from high school a year early. He enrolled at UC Berkeley in 1966; he graduated from the university in 1970 with a Bachelor of Arts in Magic,[3] becoming the first[1] and only person to have ever received any kind of academic degree in Magic from an accredited university.

Bonewits was married five times. He was married to Rusty Elliot from 1973 to 1976. His second wife was Selene Kumin Vega, followed by marriage to Sally Eaton (1980 to 1985). His fourth wife was author Deborah Lipp, from 1988 to 1998. On July 23, 2004, he was married in a handfasting ceremony to a former vice-president of the Covenant of Unitarian Universalist Pagans, Phaedra Heyman Bonewits. At the time of the handfasting, the marriage was not yet legal because he had not yet been legally divorced from Lipp, although they had been separated for several years. Paperwork and legalities caught up on December 31, 2007, making them legally married.[2][4]

Bonewits' only child, Arthur Shaffrey Lipp-Bonewits, was born to Deborah Lipp in 1990.[2] 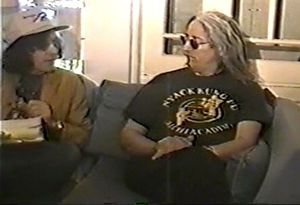 In 1966, while enrolled at UC Berkeley, Bonewits joined the Reformed Druids of North America, or RDNA. Bonewits was ordained as a Neo-druid priest in 1969. During this period, the 18-year-old Bonewits was recruited by the Church of Satan,[2] but left due to political and philosophical conflicts with Anton LaVey. During his stint in the Church of Satan, Bonewits appeared in some scenes of the 1970 documentary Satanis: The Devil's Mass.[5] Bonewits, in his article "My Satanic Adventure", asserts that the rituals in Satanis were staged for the movie at the behest of the filmmakers and were not authentic ceremonies.[6]

His first book, Real Magic, was published in 1972. Between 1973 and 1975 Bonewits was employed as editor of Gnostica magazine in Minnesota (published by Llewellyn Publications), established an offshoot group of the RDNA called the Schismatic Druids of North America, and helped create a group called the Hasidic Druids of North America (despite his lifelong status as a "gentile"). He also founded the short-lived Aquarian Anti-Defamation League (AADL), an early Pagan civil rights group.[2]

In 1976, Bonewits moved back to Berkeley and rejoined his original grove there, now part of the New Reformed Druids of North America (NRDNA). He was later elected Archdruid of the Berkeley Grove.[2]

Over the years Bonewits also had varying degrees of involvement with mystical organizations such as Ordo Templi Orientis, Gardnerian Wicca, and the New Reformed Orthodox Order of the Golden Dawn (a Wiccan organization not to be confused with the Hermetic Order of the Golden Dawn) as well as others.[7] Bonewits was a regular presenter at Neopagan conferences and festivals all over the US, as well as attending gaming conventions in the Bay Area. He promoted his book 'Authentic Thaumaturgy' to gamers as a way of organising Dungeons and Dragons games and to give a background to games of Magic: the Gathering.

In 1983, Bonewits founded Ár nDraíocht Féin (also known as "A Druid Fellowship" or ADF), which was incorporated in 1990 in the state of Delaware as a U.S. 501(c)3 non-profit organization. He made the organization's first public announcement in 1984, and began the membership sign-up at the first WinterStar Symposium in 1984. Since that time, ADF has developed into one of the world's largest forms of contemporary Druidism practiced as a religion.

Although illness curtailed many of his activities and travels for a time, he remained Archdruid of ADF until 1996. In that year, he resigned from the position of Archdruid but retained the lifelong title of ADF Archdruid Emeritus.

A songwriter, singer, and recording artist, he produced two CDs of pagan music and numerous recorded lectures and panel discussions, produced and distributed by the Association for Consciousness Exploration. He lived in Rockland County, New York, and was a member of the Covenant of Unitarian Universalist Pagans (CUUPS).

Bonewits encouraged charity programs to help Neopagan seniors,[8] and in January 2006 was the keynote speaker at the Conference On Current Pagan Studies at the Claremont Graduate University in Claremont, CA.[citation needed]

In 1990, Bonewits was diagnosed with Eosinophilia-myalgia syndrome. The illness was a factor in his eventual resignation from the position of Archdruid of the ADF.

In his book Real Magic (1971), Bonewits proposed his "Laws of Magic." These "laws" are synthesized from a multitude of belief systems from around the world to explain and categorize magical beliefs within a cohesive framework. Many interrelationships exist, and some belief systems are subsets of others. This work was chosen by Dennis Wheatley in the 1970s to be part of his publishing project 'Library of the Occult'.

Bonewits also coined much of the modern terminology used to articulate the themes and issues that affect the North American Neopagan community.