Isabella II (Spanish: Isabel II; 10 October 1830 – 10 April 1904) was queen regnant of Spain from 1833 until 1868. She came to the throne as an infant, but her succession was disputed by the Carlists, who refused to recognise a female sovereign, leading to the Carlist Wars. After a troubled reign, she was deposed in the Glorious Revolution of 1868, and formally abdicated in 1870. Her son Alfonso XII became king in 1874. 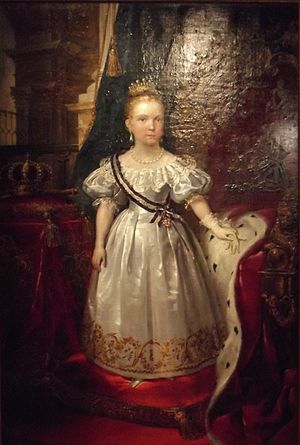 Isabella II as a child.

Isabella was born in Madrid in 1830, the eldest daughter of King Ferdinand VII of Spain, and of his fourth wife and niece, Maria Christina of Bourbon-Two Sicilies. Queen Maria Christina became regent on 29 September 1833, when her three-year-old daughter Isabella was proclaimed sovereign on the death of the king.

Isabella succeeded to the throne because Ferdinand VII had induced the Cortes Generales to help him set aside the Salic law, introduced by the Bourbons in the early 18th century, and to re-establish the older succession law of Spain. The first pretender, Ferdinand's brother Carlos, fought seven years during the minority of Isabella to dispute her title. Carlos' and his descendants' supporters were known as Carlists, and the fight over the succession was the subject of a number of Carlist Wars in the 19th century.

Isabella's reign was maintained only through the support of the army. The Cortes and the Moderate Liberals and Progressives reestablished constitutional and parliamentary government, dissolved the religious orders and confiscated their property (including that of Jesuits), and tried to restore order to Spain's finances. After the Carlist war, the regent, Maria Christina, resigned to make way for Baldomero Espartero, Prince of Vergara, the most successful and most popular Isabelline general. Espartero, a Progressive, remained regent for only two years.

Baldomero Espartero was turned out in 1843 by a military and political pronunciamiento led by Generals Leopoldo O'Donnell and Ramón María Narváez. They formed a cabinet, presided over by Joaquín María López y López. This government induced the Cortes to declare Isabella of age at 13. 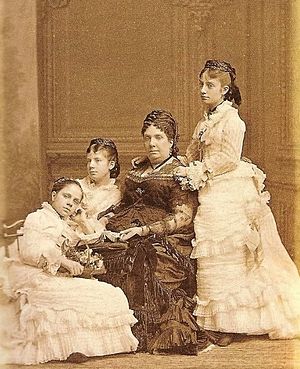 The marriages suited France and Louis Philippe, King of the French, who as a result nearly quarrelled with Britain. However, the marriages were not happy; persistent rumour had it that few if any of Isabella's children were fathered by her king-consort, rumoured to be a homosexual. The Carlist party asserted that the heir-apparent to the throne, who later became Alfonso XII, had been fathered by a captain of the guard, Enrique Puigmoltó y Mayans.[1]

Isabella had twelve children, but only five reached adulthood:

The couple was rather caustically described by an English contemporary thus:

… The Queen is large in stature, but rather what might be called bulky than stately. There is no dignity either in her face or figure, and the graces of majesty are altogether wanting. The countenance is cold and expressionless, with traces of an unchastened, unrefined, and impulsive character, and the indifference it betrays is not redeemed by any regularity or beauty of feature.

The King Consort is much smaller in figure than his royal two-thirds, and certainly is not a type that could be admired for its manly qualifications; but we have to remember that in Spain aristocratic birth is designated rather by a diminutive stature and sickly complexion than by those attributes of height, muscular power, open expression, and florid hue, which in England constitute the ideal of ‘race.’[2]

Reign as an adult

Isabella directly reigned from 1843 to 1868, a period of palace intrigues, back-stairs and antechamber influences, barracks conspiracies, and military pronunciamientos to further the ends of the political parties — Moderados who ruled from 1846 to 1854, Progressives from 1854 to 1856, and Unión Liberals from 1856 to 1863. Moderados and Unión Liberals quickly succeeded each other and kept out the Progressives, thus sowing the seeds for the Revolution of 1868.

Queen Isabella often interfered in politics. She showed favour to her reactionary generals and statesmen and to the Church and religious orders. Other events of her reign were the war against Morocco (1859), which ended in a treaty advantageous for Spain and cession of some Moroccan territory; the fruitless Chincha Islands War against Peru and Chile; tensions with the United States; independence revolts in Cuba and Puerto Rico; and some progress in public works, especially railways, and a slight improvement in commerce and finance. 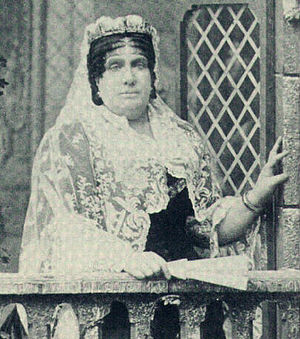 Isabella II of Spain in exile in Paris

At the end of September 1868, Isabella went into exile, after her Moderado generals had made a slight show of resistance that was crushed at the Battle of Alcolea by Generals Serrano and Prim. This revolt, which deposed Isabella, is known as the Glorious Revolution, and ushered the First Spanish Republic into power. The new government replaced Isabella with Amadeo I, second son of Victor Emmanuel II of Italy, after much deliberation.

Her exile helped cause the Franco-Prussian War, as Napoleon III could not accept the possibility that a German, Prince Leopold of Hohenzollern-Sigmaringen, might replace Isabella, a dynast of the Spanish Bourbons and great-great-granddaughter of the French-born Philip V of Spain.

The First Spanish Republic collapsed in December 1874. Isabella had been induced to abdicate in Paris on 25 June 1870, in favour of her son, Alfonso XII, furthering the cause of the Restoration. After the collapse of the Republic, Alfonso was placed on the throne. 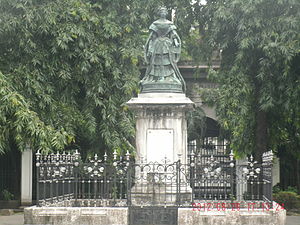 A Statue of Isabella II in front of Puerta Isabel in Intramuros, Manila

She had left her husband the previous March and continued to live in France after the restoration in 1874, in a small circle with the Marqués de Alta Villa as her secretary. On the occasion of one of her visits to Madrid during Alfonso XII's reign, she began to intrigue with the politicians of the capital, and was peremptorily requested to go abroad again. She resided in Paris for the rest of her life, seldom travelling abroad except for a few visits to Spain. During her exile, she grew closer to her husband, with whom she maintained an ambiguous friendship until his death in 1902. Her last days were marked by the matrimonial problems of her youngest daughter, Eulalia. She died on 10 April 1904, and is entombed in El Escorial.

The underage Queen Isabella was known by the centuries-old feudal, symbolic, long title that included both extant and extinct titles and claims:

Isabella II by the Grace of God, Queen of Castile, Leon, Aragon, of the Two Sicilies, of Jerusalem, of Navarre, of Granada, of Toledo, of Valencia, of Galicia, of Majorca, of Seville, of Sardinia, of Córdoba, of Corsica, of Murcia, of Menorca, of Jaén, the Algarves, Algeciras, Gibraltar, the Canary Islands, of the East and West Indies, Islands and Mainland of the Ocean Sea; Archduchess of Austria; Duchess of Burgundy, Brabant, Milan and Aspurg; Countess of Flanders, Tirol and Barcelona; Lady of Biscay and Molina

In 1837, Spanish legislation produced a constitutional monarchy and a new format of the title was used for Isabella:

By the grace of God and the Constitution of the Spanish monarchy, Queen Isabella II of Spain

In the 1997 film Amistad, she was played by Anna Paquin, and is depicted as a spoiled 11-year-old girl.