From Infogalactic: the planetary knowledge core
Jump to: navigation, search
This article is about the wife of Christian II of Denmark. For the third wife of Philip the Good, Duke of Burgundy, see Infanta Isabel, Duchess of Burgundy. 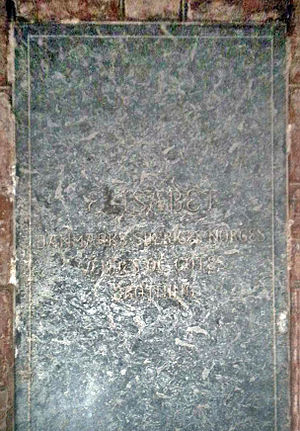 Isabella of Austria ( 18 July 1501 – 19 January 1526), also known as Elizabeth, Archduchess of Austria and Infanta of Castile and Aragon, was Queen of Denmark, Sweden and Norway as the wife of King Christian II. She was the daughter of King Philip I and Queen Joanna of Castile and the sister of Emperor Charles V. She was born at Brussels. She served as regent of Denmark in 1520.[1] 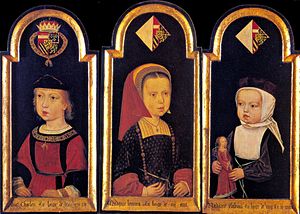 Portrait of Isabella, age 2. Isabella is on the right. She is pictured with her brother Charles and her sister Eleanor.

Isabella spent her childhood in the Netherlands under the tutorage of the regent of the Netherlands, Margaret of Austria. Her fortune, her succession rights, and her connections made her a valuable pawn in the royal marriage market. The king of Denmark had first intended to marry her eldest sister Eleanor of Austria, but the Habsburgs considered Eleanor too valuable for the throne of Denmark, and therefore, Isabella was selected for the Danish king.

On 11 July 1514 Isabella was married by proxy to King Christian II of Denmark with Emperor Maximilian I, her grandfather, standing in for the king. She remained in the Netherlands, but was said to have fallen in love with her spouse at the sight of his painting, and asked to be taken to Denmark. A year after the wedding, the Archbishop of Nidaros was sent to escort her to Copenhagen. The marriage was ratified on 12 August 1515 (she was 14 years old).

Isabella was crowned Queen of Denmark and Norway and began using another version of her name, Elisabeth, but the relationship between her and her new family and Christian was quite cool during the first years of the marriage. The King's Dutch mistress, Dyveke Sigbritsdatter, had been with him since 1507, and he was not about to give her up for a teenager. Dyveke's mother, Sigbrit Willoms, was also influential at court, and Isabella was given less influence than both of them. This angered the Emperor, and caused some diplomatic strife between him and King Christian, but the matter was resolved when Dyveke died in 1517, and Isabella's relationship with her husband improved vastly over the next few years; her relationship with Sigrit Willoms improved as well, and both women acted as political advisors to the king. From 1516, Anne Meinstrup was head lady-in-waiting of her court.

In 1520, Christian took the throne of Sweden, thereby making Isabella Queen of Sweden. After taking Stockholm, he asked the Swedish representatives to turn it and the regency of Sweden over to Isabella if he himself should die when his children were minors. She was to be the last Queen of Sweden who was also Queen of Denmark during the Kalmar union, but she in fact never visited Sweden; pregnant at the time of her spouse's accession to the throne of Sweden, she did not follow him there. Isabella served as the regent of Denmark during Christian's stay in Sweden.[1] Her husband was deposed as king of Sweden the following year.

When King Christian was deposed in 1523 by disloyal noblemen supporting his uncle Duke Frederick, the new king wanted to be on good terms with her family. He wrote her a personal letter in her native German, offering her a dowager queen's pension and permitting her to stay in Denmark under his protection while King Christian fled to the Low Countries. But Isabella wrote back to Duke Frederick in Latin, stating that : "ubi rex meus, ibi regnum meum", that is "where my king is, there is my kingdom".

Isabella left Denmark with her husband and their children after her husband was deposed in 1523 and travelled to the Netherlands. Isabella and Christian travelled around Germany in an attempt to gain help for Christian's restoration to the throne. Isabella made her own negotiations with her relatives, and also accompanied her husband on his travels.[2] They visited Saxony in 1523 and Berlin in 1523–1524. In Berlin, Isabella became interested in the teachings of Luther, and felt sympathy for Protestantism,[2] however she never converted officially. When she visited Nürnberg in 1524, she received communion in the Protestant way, which so enraged her birth family, the Habsburgs, that Christian decided that she should hide her Protestant views in the future, for political reasons[2]

In the spring of 1525, Isabella caught some kind of serious illness, which worsened after she travelled through a storm later that year, and lasted all summer. The former queen died at the castle of Zwijnaarde near Ghent aged twenty-four. She received both Protestant and Catholic communion, but the Habsburgs declared that she had died a convinced Catholic.[2] Her religious sympathies, and whether she was a Protestant or a Catholic after 1524, have been debated. At her deathbed, she gave the cause of her husband's restoration to her aunt, the regent of the Netherlands, Margaret of Austria.

Her 15xgreat-granddaughter Princess Isabella of Denmark was named after her.