Isabella of Castile, Duchess of York

Isabella of Castile, Duchess of York (1355 – 23 December 1392) was the daughter of King Peter and his mistress María de Padilla (d. 1361). She accompanied her elder sister, Constance, to England after Constance's marriage to John of Gaunt, 1st Duke of Lancaster, and married Gaunt's younger brother, Edmund of Langley, 1st Duke of York.[1]

On 21 September 1371 Edward III's fourth son, John of Gaunt, 1st Duke of Lancaster, married Isabella's elder sister, Constanza (d.1394), who after the death of her father in 1369 claimed the throne of Castile. Isabella accompanied her sister to England, and on 11 July 1372, at about the age of 17, married John of Gaunt's younger brother, Edmund of Langley, 1st Duke of York, fifth son of King Edward III and Philippa of Hainault, at Wallingford, Oxfordshire, as part of a dynastic alliance in furtherance of Gaunt's claim to the crown of Castile.[3] According to Pugh, Isabella and Edmund of Langley were 'an ill-matched pair'.[4]

As a result of her indiscretions, including an affair with King Richard II's half-brother, John Holland, 1st Duke of Exeter (d.1400), whom Pugh terms 'violent and lawless', Isabella left behind a tarnished reputation, her loose morals being noted by the chronicler Thomas Walsingham. According to Pugh, the possibility that Holland was the father of Isabella's favourite son, Richard of Conisburgh, 3rd Earl of Cambridge, 'cannot be ignored'.[5]

In her will Isabel named King Richard as her heir, requesting him to grant her younger son, Richard, an annuity of 500 marks. The King complied. However, further largess which might have been expected when Richard came of age was not to be, as King Richard II was deposed in 1399, and according to Harriss, Isabella's younger son, Richard, 'received no favours from the new King, Henry IV'.[6]

Isabella died 23 December 1392, aged about 37, and was buried 14 January 1393 at the church of the Dominicans at Kings Langley.[7] After Isabella's death, Edmund of Langley married Joan Holland, sister and co-heir of Edmund Holland, 4th Earl of Kent (9 January 1382 – 15 September 1408), with whom his daughter, Constance, had lived as his mistress (see above).[8] 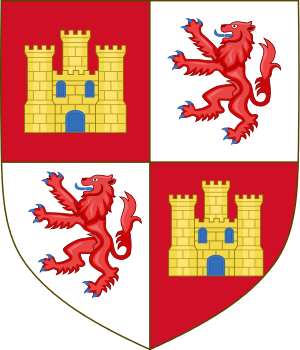 Coat of arms of Castile and León which Isabel adopted as the daughter of King Peter of Castile. Quarterly, Castille and Leon (Kingdom of Castille).[10]

Isabella and Edmund of Langley, 1st Duke of York, had three children:

Shakespeare and Isabella of Castile

Isabella is depicted, unhistorically, as living in late December 1399 at the time of the Epiphany Rising in Act V of Shakespeare's Richard II.