Isabella of Scotland, Duchess of Brittany

From Infogalactic: the planetary knowledge core
(Redirected from Isabella of Scotland)
Jump to: navigation, search

Not to be confused with Isabella of Scotland, Countess of Norfolk

Isabella Stewart (autumn of 1426 – 13 October 1494/5 March 1499), was a Scottish princess and by marriage the Duchess of Brittany. Also known as Isabel Stewart and Isabel of Scotland, she was the second daughter of James I of Scotland and Joan Beaufort and the second wife of Duke Francis I of Brittany.

It was said she was more beautiful than her elder sister Margaret, who married the Dauphin of France, and that John V, Duke of Brittany proposed to marry her; thus he sent ambassadors to Scotland to take a description of her. They reported "she was handsome, upright and graceful but she seemed simple too". The Duke's reply was "My friends, return to Scotland and bring her here, she is all I desire, and I will have no other; your clever women do more harm than good". The marriage contract was signed on 19 July 1441 and ratified on 29 September of that year, but Duke John V died on 29 August 1442, before performing the formal religious ceremony. 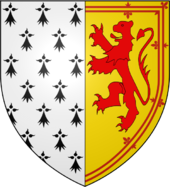 Once in Brittany, Isabella married instead with the eldest son of her groom, now Francis I, Duke of Brittany at the Château d'Auray on 30 October 1442, after which the whole court went to Rennes for eight days of festivities. They had two daughters:

Upon the death of her sister Margaret in 1445, Isabella penned an illuminated prayer book of hours Livre d'Isabeau d'Escosse, which is still in preservation to this day. Like her father she had some reputation as a poet.

Upon her husband's death in 1450, there were talks of Isabella's marrying Charles, Prince of Viana, heir to the disputed Kingdom of Navarre, but this proposal fell through due to the disapproval of Charles VII of France. Her brother James II made vigorous efforts to persuade her to return to Scotland, where he hoped to arrange a second marriage for her. Isabella however refused, saying that she was happy and popular in Brittany and was in any case too frail to travel, and complaining that her brother had never paid her dowry.[1] Isabella died ca. 1494/99, which suggests that her claims of ill health 40 years earlier were much exaggerated.