Isabella of Valois, Duchess of Bourbon

Isabella of Valois, Duchess of Bourbon or Isabella of France (1313 – 26 July 1383), was a Petit Fille of France, and a daughter of Charles of Valois by his third wife Mahaut of Châtillon.[1] She was the wife of Peter I, Duke of Bourbon.

On 25 January 1336 Isabella married Peter I, Duke of Bourbon,[1] son of Louis I, Duke of Bourbon and Mary of Avesnes. Peter and Isabella had only one son, Louis and seven daughters. Her husband died at the Battle of Poitiers in 1356,[2] and Isabella never remarried. After her husband's death Isabella's son Louis became the Duke of Bourbon. In the same year 1356, Isabella arranged for her daughter Joanna to marry Charles V of France; as he was at the time the Dauphin of France, Joanna duly became Dauphine. 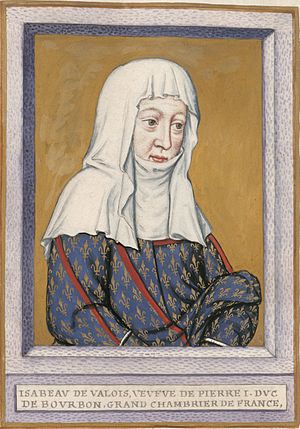 Isabella in her later years

She died on 26 July 1383 at the age of seventy. She was buried in Eglise des Frères Mineurs in Paris.