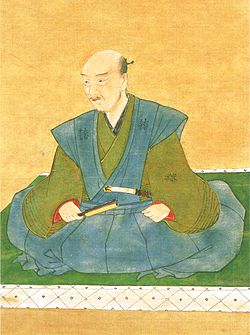 Ishida Mitsunari, depicted in a portrait.
In this Japanese name, the family name is Ishida.

Ishida Mitsunari's letter to Toyotomi Hideyoshi, expressing a negative opinion of some generals' (including Kobayakawa Hideaki) reckless action on the battlefield during the Japanese invasions of Korea.

The emblem (mon) of Ishida Mitsunari

Ishida Mitsunari (石田 三成, 1559 – November 6, 1600) was a samurai of the late Sengoku period of Japan. He is probably best remembered as the commander of the Western army in the Battle of Sekigahara following the Azuchi-Momoyama period of the 16th century. Also known by his court title, Jibu-no-shō (治部少輔).

He was born in the north of Ōmi Province (which is now Nagahama city, Shiga prefecture), and was the second son of Ishida Masatsugu, who was a retainer for the Azai clan. His childhood name was Sakichi (佐吉). The Ishida withdrew from service after the Azai's defeat in 1573. According to legend, he was a monk in a Buddhist temple before he served Toyotomi Hideyoshi, but the accuracy of this legend is doubted since it only came about during the Edo period.

Mitsunari met Toyotomi Hideyoshi when the former was still young and the latter was the daimyo of Nagahama. When Hideyoshi engaged in a campaign in the Chūgoku region, Mitsunari assisted his lord in attacks against castles like the Tottori Castle and Takamatsu Castle (in present-day Okayama).

After Hideyoshi seized power, Mitsunari became known as a talented financial manager due to his knowledge and skill at calculation. From 1585 onward, he was the administrator of Sakai, a role he took together with his elder brother Ishida Masazumi. He was appointed one of the five bugyo, or top administrators of Hideyoshi's government. Hideyoshi made him a daimyo of Sawayama in Ōmi Province, a five hundred thousand koku fief (now a part of Hikone). Sawayama Castle was known as one of the best-fortified castles during that time.

Mitsunari was a leader of bureaucrats in Hideyoshi's government, and was known for his rigid character. Though he had many friends, he was on bad terms with some daimyo that were known as good warriors, including Hideyoshi's relatives Fukushima Masanori and Katō Kiyomasa. After Hideyoshi's death, their conflict worsened. The central point of their conflict was the question of whether Tokugawa Ieyasu could be relied on as a supporter of the Toyotomi government, whose nominal lord was the child Toyotomi Hideyori.

In 1600, the Battle of Sekigahara was fought as a result of this political conflict. Mitsunari succeeded in organizing an army led by Mōri Terumoto. But the coalition following Tokugawa Ieyasu was greater, and the battle resulted in Mitsunari's defeat.

After his defeat, Mitsunari sought to escape, but was caught by villagers. He was beheaded in Kyoto. Other daimyo of the Western army, like Konishi Yukinaga and Ankokuji Ekei were also executed. After execution, his head, severed from his body, was placed on a stand for all the people in Kyoto to see. His remains were buried at Sangen-in, a sub-temple of the Daitoku-ji, Kyoto.

A theory / legend says Ieyasu showed him mercy, but hid him for political reasons, with one of his veteran generals, Sakakibara Yasumasa, then grew old and died of natural death. To thank Yasumasa for his silence, Mitsunari gave him a treasured sunnobi-tantō of 31,2 cm therefor nicknamed Ishida-Sadamune (石田貞宗), ranked Jūyō Bunkazai by the Japanese Government.

Mitsunari had three sons (Shigeie, Shigenari, and Sakichi) and three daughters (only the younger girl's name is known, Tatsuhime) with his wife. After his father's death, Shigenari changed his family name to Sugiyama to keep living.

In James Clavell's historical-novel Shogun,[1] Ishida served as basis for the character of "Ishido". Ishido was portrayed by Nobuo Kaneko in the 1980 TV mini-series adaptation.