Ishikawa Goemon (石川 五右衛門?, 1558 – October 8, 1594) was a semi-legendary Japanese outlaw hero who stole gold and valuables and gave them to the poor.[1] Goemon is notable for being boiled alive along with his son in public after a failed assassination attempt on the civil war-era warlord Toyotomi Hideyoshi. His legend continues to live on in contemporary Japanese popular culture, often with greatly exaggerated ninja skills. 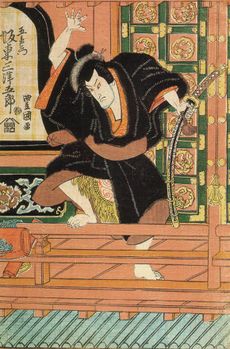 Bandō Mitsugorō III playing the role of Ishikawa Goemon in the kabuki drama Sanmon Gosan no Kiri, which was staged in 1820 at the Nakamura-za theater (print made by Utagawa Toyokuni I)

There is little historical information on Goemon's life, and as he has become a folk hero, his background and origins have been widely speculated upon. In his first appearance in the historical annals, in the 1642 biography of Hideyoshi, Goemon was referred to simply as a thief. As his legend became popular, various anti-authoritarian exploits were attributed to him, including a supposed assassination attempt against the Oda clan warlord Oda Nobunaga.[2][3]

There are many versions of Goemon's background and accounts of his life. According to one of them, he was born as Sanada Kuranoshin in 1558 to a samurai family in service of the powerful Miyoshi clan in Iga Province. In 1573, when his father (possibly Ishikawa Akashi[4]) was killed by the men of Ashikaga shogunate (in some versions his mother was also killed), the 15-year-old Sanada swore revenge and began training the arts of Iga ninjutsu under Momochi Sandayu (Momochi Tamba). He was however forced to flee when his master discovered Sanada's romance with one of his mistresses (but not before stealing a prized sword from his teacher). Some other sources state his name as Gorokizu (五郎吉?) and say he came from Kawachi Province and was not a nukenin (runaway ninja) at all. He then moved to the neighbouring Kansai region, where he formed and led a band of thieves and bandits as Ishikawa Goemon, robbing the rich feudal lords, merchants and clerics, and sharing the loot with the oppressed peasants.[5] According to another version, which also attributed a failed poisoning attempt on Nobunaga's life to Goemon, he was forced to become a robber when the ninja networks were broken up.[6] 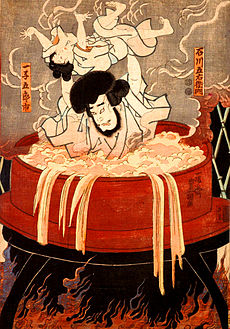 There are also several conflicting accounts of Goemon's public execution by boiling in front of the main gate of the Buddhist temple Nanzen-ji in Kyoto,[7] including but not limited to the following ones: 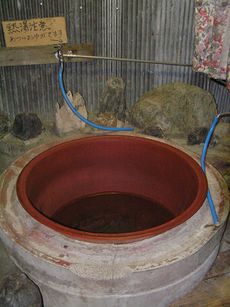 Even the very date of his death is uncertain, as some records say this took place in summer, while another dates it at October 8 (that is after middle of Japanese autumn). Before he died, Goemon wrote a famous farewell poem, saying that no matter what, there always shall be thieves. A tombstone dedicated to him is located in Daiunin temple in Kyoto.[11] A large iron kettle-shaped bathtub is now called a goemonburo ("Goemon bath").[12][13]

Ishikawa Goemon is the subject of many classic kabuki plays. The only one still in performance today is Kinmon Gosan no Kiri (The Golden Gate and the Paulownia Crest), a five-act play written by Namiki Gohei in 1778.[14] The most famous act is "Sanmon Gosan no Kiri"[15] ("The Temple Gate and the Paulownia Crest") in which Goemon is first seen sitting on top of the Sanmon gate at Nanzen-ji. He is smoking an over-sized silver pipe called a kiseru and exclaims "The spring view is worth a thousand gold pieces, or so they say, but 'tis too little, too little. These eyes of Goemon rate it worth ten thousand!". Goemon soon learns that his father, a Chinese man named So Sokei, was killed by Mashiba Hisayoshi (a popular kabuki alias for Hideyoshi) and he sets off to avenge his father's death. He also appears in the famous tale of the Forty-seven Ronin, first staged also in 1778. In 1992, Goemon appeared in the kabuki series of Japanese postage stamps.[16] 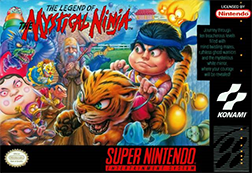 The 1992 video game The Legend of the Mystical Ninja (Ganbare Goemon: Yukihime Kyuushutsu Emaki). In the English version, Goemon was renamed as "Kid Ying"

There are generally two ways in which Goemon has been most often portrayed in the modern popular culture: either a young, slender ninja, or a powerfully-built, hulking Japanese bandit. Goemon is the titular character of the long-running Konami video game series Ganbare Goemon as well as a television series based on it. He is the subject of the Shinobi no Mono novels and film series, starring Ichikawa Raizō VIII as Goemon in the first three installments. In the third Shinobi no Mono film, known in English as Goemon Will Never Die,[17] he escapes execution while another man is bribed to be boiled in his place. In the film Goemon, he is portrayed by Yosuke Eguchi and depicted as Nobunaga's most faithful follower and as associated with Hattori Hanzō as well as Kirigakure Saizō and Sarutobi Sasuke of Sanada Ten Braves.

Goemon appears in the video game series Samurai Warriors and Warriors Orochi (where he is a self-proclaimed king of thieves, wielding a giant mace and a handheld cannon), as well as in the video games Blood Warrior, Kessen III,[18] Ninja Master's -Haoh-Ninpo-Cho- (depicted as a giant bandit hero, also carrying a cannon and seeking to plunder Nobunaga's castle), Shall We Date?: Ninja Love (a romance option or the player character),[19] Shogun Warriors, and Throne of Darkness, where he has been spared by Tokugawa Ieyasu on the condition that he would join the onimitsu.[20] Goemon was a subject of several pre-WWII Japanese films such as Ishikawa Goemon Ichidaiki and Ishikawa Goemon no Hoji.[21][22] He is a villain in Torawakamaru the Koga Ninja,[23] and a tragic antagonist in Fukurō no Shiro (and in its remake Owls' Castle, played by Takaya Kamikawa). He also appears in the taiga drama series Hideyoshi, the film Roppa no Ôkubo Hikozaemon, the manga series Kaze ga Gotoku, and the manga and anime series Bobobo-bo Bo-bobo.

GOEMON was a stage name of Koji Nakagawa, a Japanese hardcore wrestler in the Frontier Martial-Arts Wrestling.[24] Various fictional characters inspired by or nicknamed after Goemon appear in the film Abare Goemon: Rise Against the Sword (played by Toshiro Mifune), the manga Town of Evening Calm, Country of Cherry Blossoms and the tokusatsu series Kamen Rider X, and the method of poison delivery sometimes attributed to Goemon's supposed attempt to kill Nobunaga inspired Aki's death scene in the film You Only Live Twice.[25] The character Goemon Ishikawa XIII in the manga and anime series Lupin III is purported to be his descendant and the opening sequence in the Lupin III TV special Burn, Zantetsuken! even shows him weeping while watching the famed kabuki performance based on Goemon's life. Goemon is also an ancestor of Misaki Kureha in the anime series Divergence Eve and Misaki Chronicles where Goemon himself appears in two episodes.