From Infogalactic: the planetary knowledge core
Jump to: navigation, search
For other uses, see Island (disambiguation). 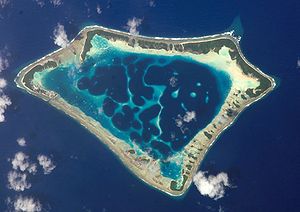 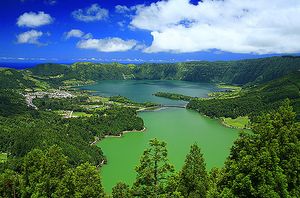 São Miguel Island, in Azores archipelago, is also referred as "The Green Island". 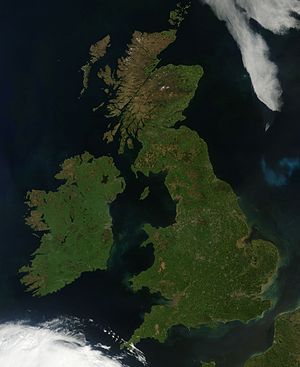 The British Isles are a large group of islands. The main islands include Great Britain and Ireland. 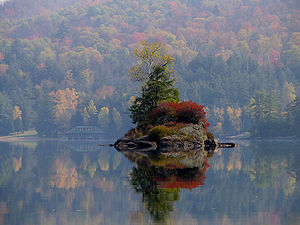 A small island in Lower Saranac Lake in the Adirondacks in the U.S. 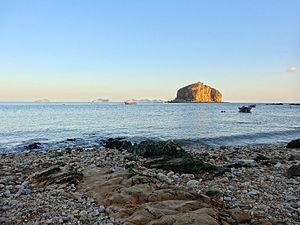 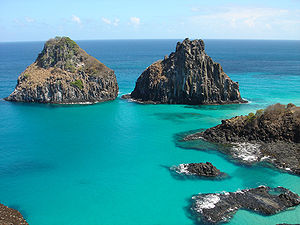 The islands of Fernando de Noronha, Brazil, are the visible parts of submerged mountains

A subterranean isle in Cross Cave 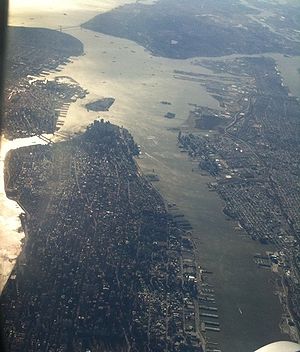 Manhattan, U.S. is home to over 1.6 million people 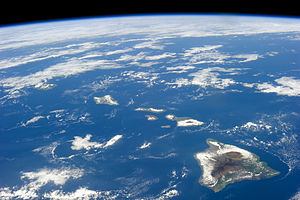 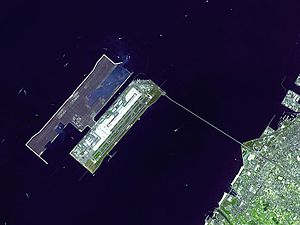 Kansai Airport is a constructed island, home to an airport

An island /ˈaɪlənd/ or isle /ˈaɪl/ is any piece of sub-continental land that is surrounded by water. Very small islands such as emergent land features on atolls can be called islets, skerries, cays or keys. An island in a river or a lake island may be called an eyot or ait, or a holm. A grouping of geographically or geologically related islands is called an archipelago, e.g. the Philippines.

An island may be described as such despite the presence of an artificial land bridge, for example Singapore and its causeway, or the various Dutch delta islands, such as IJsselmonde. Some places may even retain "island" in their names for historical reasons after being connected to a larger landmass by a wide land bridge, such as Coney Island or Coronado Island. Conversely, when a piece of land is separated from the mainland by a man-made canal, for example the Peloponnese by the Corinth Canal, it is generally not considered an island.

There are two main types of islands: continental islands and oceanic islands. There are also artificial islands.

The word island derives from Middle English iland, from Old English igland (from ig, similarly meaning 'island' when used independently, and -land carrying its contemporary meaning; cf. Dutch eiland ("island"), German Eiland ("small island")). However, the spelling of the word was modified in the 15th century because of a false etymology caused by an incorrect association with the etymologically unrelated Old French loanword isle, which itself comes from the Latin word insula.[2] Old English ig is actually a cognate of Latin aqua (water).[3]

Difference between islands and continents

Continental islands are bodies of land that lie on the continental shelf of a continent.[8] Examples include Borneo, Java, and Sumatra off Asia; New Guinea, Tasmania, and Kangaroo Island off Australia; Great Britain, Ireland, and Sicily off Europe; Greenland, Newfoundland, Long Island, and Sable Island off North America; and Barbados, Falklands and Trinidad off South America.

A special type of continental island is the microcontinental island, which is created when a continent is rifted. Examples are Madagascar and Socotra off Africa, the Kerguelen Islands, New Caledonia, New Zealand, and some of the Seychelles.

Another subtype is an island or bar formed by deposition of tiny rocks where a water current loses some of its carrying capacity. An example is barrier islands, which are accumulations of sand deposited by sea currents on the continental shelves. Another example are fluvial or alluvial islands formed in river deltas or midstream within large rivers. While some are transitory and may disappear if the volume or speed of the current changes, others are stable and long-lived. Islets are very small islands.

A desert island is an island with no people. Typically, a desert island is denoted as such because it exists in a state of being deserted, or abandoned. An arid desert climate is not typically implied; one dictionary uses the phrase 'desert island' to illustrate the use of 'desert' as an adjective meaning "desolate and sparsely occupied or unoccupied".[9] According to another, "A desert island is a small tropical island, where nobody lives or an undiscovered island."[10]

Oceanic islands are ones that do not sit on continental shelves. The vast majority are volcanic in origin such as Saint Helena in the South Atlantic Ocean.[11] The few oceanic islands that are not volcanic are tectonic in origin and arise where plate movements have lifted up the deep ocean floor above the surface. Examples include Saint Peter and Paul Rocks in the Atlantic Ocean and Macquarie Island in the Pacific.

One type of volcanic oceanic island is found in a volcanic island arc. These islands arise from volcanoes where the subduction of one plate under another is occurring. Examples include the Aleutian Islands, the Mariana Islands, and most of Tonga in the Pacific Ocean. Some of the Lesser Antilles and the South Sandwich Islands are the only Atlantic Ocean examples.

Another type of volcanic oceanic island occurs where an oceanic rift reaches the surface. There are two examples: Iceland, which is the world's second largest volcanic island, and Jan Mayen. Both are in the Atlantic.

A third type of volcanic oceanic island is formed over volcanic hotspots. A hotspot is more or less stationary relative to the moving tectonic plate above it, so a chain of islands results as the plate drifts. Over long periods of time, this type of island is eventually "drowned" by isostatic adjustment and eroded, becoming a seamount. Plate movement across a hot-spot produces a line of islands oriented in the direction of the plate movement. An example is the Hawaiian Islands, from Hawaii to Kure, which then extends beneath the sea surface in a more northerly direction as the Emperor Seamounts. Another chain with similar orientation is the Tuamotu Archipelago; its older, northerly trend is the Line Islands. The southernmost chain is the Austral Islands, with its northerly trending part the atolls in the nation of Tuvalu. Tristan da Cunha is an example of a hotspot volcano in the Atlantic Ocean. Another hot spot in the Atlantic is the island of Surtsey, which was formed in 1963.

An atoll is an island formed from a coral reef that has grown on an eroded and submerged volcanic island. The reef rises to the surface of the water and forms a new island. Atolls are typically ring-shaped with a central lagoon. Examples include the Line Islands in the Pacific and the Maldives in the Indian Ocean.

Approximately 45,000 tropical islands with an area of at least 5 hectares (12 acres) exist.[12] Examples formed from coral reefs include Maldives, Tonga, Samoa, Nauru, and Polynesia.[12] Granite islands include Seychelles and Tioman and volcanic islands such as Saint Helena.

The socio-economic diversity of tropical islands ranges from the Stone Age societies in the interior of Madagascar, Borneo, and Papua New Guinea to the high-tech lifestyles of the city-islands of Singapore and Hong Kong.

International tourism is a significant factor in the economy of many tropical islands including Seychelles, Sri Lanka, Mauritius, Réunion, Hawaii, and the Maldives.

Most of the Earth's islands are natural and have been formed by tectonic forces or volcanic eruptions. However, artificial (man-made) islands also exist, such as the island in Osaka Bay off the Japanese island of Honshu, on which Kansai International Airport is located. Artificial islands can be built using natural materials (e.g., earth, rock, or sand) and/or artificial ones (e.g. concrete slabs or recycled waste).[citation needed] Sometimes natural islands are artificially enlarged, such as Vasilyevsky Island in the Russian city of St. Petersburg, which had its western shore extended westward by some 0.5 km in the construction of the Passenger Port of St. Petersburg.