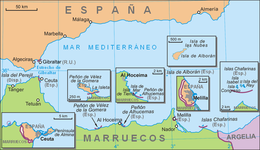 Plazas de soberanía. The Islas Chafarinas are on the right.

The Chafarinas Islands (Spanish: Islas Chafarinas IPA: [ˈizlas tʃafaˈɾinas], Berber: Igumamen Iceffaren or Takfarinas, Arabic: جزر الشفارين or الجزر الجعفرية), also spelled Zafarin, Djaferin[1] or Zafarani,[2] are a group of three small islets located in the Alboran Sea off the coast of Morocco with an aggregate area of 0.525 square kilometres (0.203 sq mi), 45 km (28.0 mi) to the east of Nador and 3.3 km (2.1 mi) off the Moroccan town of Ras Kebdana.

The Chafarinas Islands are one of the Spanish territories on North Africa off the Moroccan coast known as plazas de soberanía.

The Chafarinas Islands are made up of three islands (from west to east, with areas in hectares):

The islands had a certain relevance in Spanish environmentalist circles during the 1980s and 1990s as the very last individual of Mediterranean monk seal in Spanish territory lived there, until it disappeared in the 1990s.[3] Nine out of eleven marine invertebrates considered endangered species and the second largest colony in the world of the endangered Audouin's gull inhabit the islands.[4]