From Infogalactic: the planetary knowledge core
Jump to: navigation, search
This article is about the island in Lake Superior. For the 18th-century French colony, see Settlement history of Cape Breton.

Isle Royale /ˌaɪl ˈrɔɪ.əl/[1] is an island of the Great Lakes, located in the northwest of Lake Superior, and part of the U.S. state of Michigan. The island and the 450 surrounding smaller islands and waters make up Isle Royale National Park.[2]

The island is 45 miles (72 km) long and 9 miles (14 km) wide, with an area of 206.73 square miles (535.43 km2), making it the largest natural island in Lake Superior, the second largest island in the Great Lakes (after Manitoulin Island), the third largest in the contiguous United States (after Long Island and Padre Island), and the 33rd largest island in the United States. It is defined by the United States Census Bureau as Census Tract 9603 of Keweenaw County, Michigan. As of the 2000 census there was no permanent population.[3] After the island was made a national park, some existing residents were allowed to stay,[4] and a few leases are still in effect. Ferries from Michigan and Minnesota land at Rock Harbor on the eastern end of the island; this has a lodge, campground, and information center. Ferries from Minnesota also run to Windigo on the western end, which has a visitor center and campground.

In 1875, Isle Royale was set off from Keweenaw County, as a separate county, "Isle Royale County". In 1897, the county was dissolved, and the island was reincorporated into Keweenaw County. The highest point on the island is Mount Desor at 1,394 feet (425 m), or about 800 feet (240 m) above lake level.

Isle Royale is within about 15 miles (24 km) of the Canadian and Minnesotan shores of the lake, (near the city of Thunder Bay, Ontario), and is 56 miles (90 km) from the Michigan shore, on the Keweenaw Peninsula. There are seasonal passenger ferry services to the island from Grand Portage, Minnesota; Copper Harbor, Michigan; and Houghton, Michigan. There is also a seasonal sea plane service. There are no roads on the island, and wheeled vehicles or devices, other than wheelchairs, are not permitted.[5] Rock Harbor has wheeled carts available to move personal belongings from the Rock Harbor marina to the cabins and hotel. Also the National Park Service employs tractors and a few World War II jeeps to move items around the ranger station area at Windigo, Rock Harbor, and Mott Island.

Topsoil tends to be thin, which favors trees that have horizontal root patterns such as balsam fir, white spruce, and black spruce.

The island is composed largely of ridges, running roughly southwest-to-northeast. The main ridge, Greenstone Ridge, is over 1,000 feet (300 m) in many places. Greenstone belts are exposed, with rounded stones of chlorastrolite or greenstone near and in the lake. 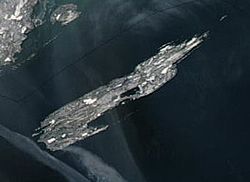 According to the National Park Service, the north sides of the ridges tend to be steeper than the south sides. Coastal areas were once submerged beneath prehistoric lake waters, and contain many tumbled boulders and other large rocks.

The island was a common hunting ground for native peoples from nearby Minnesota and Ontario. A canoe voyage of thirteen miles is necessary to reach the island's west end from the mainland.

In prehistoric times, large quantities of copper were mined on Isle Royale and the nearby Keweenaw Peninsula. The region is scarred by ancient mine pits and trenches up to 20 feet deep. Carbon-14 testing of wood remains found in sockets of copper artifacts indicates that they are at least 5700 years old. In Prehistoric Copper Mining in the Lake Superior Region, published in 1961, Drier and Du Temple estimated that over 750,000 tons of copper had been mined from the region. However, David Johnson and Susan Martin contend that their estimate was based on exaggerated and inaccurate assumptions.[7][8]

In the mid-1840s, a report by Douglass Houghton, Michigan's first state geologist, set off a copper boom in the state, and the first modern copper mines were opened on the island.[9] Evidence of the earlier mining efforts was everywhere, in the form of many stone hammers, some copper artifacts, and places where copper had been partially worked out of the rock but left in place. The ancient pits and trenches led to the discovery of many of the copper deposits that were mined in the 19th century.[7] The remoteness of the island, combined with the small veins of copper, caused most of the 19th-century mines to fail quickly.[citation needed] Between the miners and commercial loggers, much of the island was deforested during the late 19th century. Once the island became a national park in 1940, logging and other exploitive activities ended, and the forest began to regenerate.

The island was once the site of several lake trout and whitefish fisheries, as well as a few resorts. Today, it has no permanent inhabitants; the small communities of Scandinavian fishermen were removed by the United States National Park Service (NPS) after the island became a national park in the 1930s. About 12 families have life-time leases for their cabins and claim Isle Royale as their heritage, and several descendant fishermen fish the Isle Royale waters commercially.[4] The western tip of the island is home to several shipwrecks that are very popular with scuba divers, including the SS America.[10] The NPS Submerged Resources Center mapped the 10 most famous of the shipwrecks contained within the park, and published Shipwrecks of Isle Royale National Park; The Archeological Survey,[11] which gives an overview of the maritime history of the area. 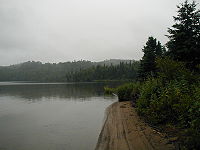 Beach near mouth of Washington Creek

Recreational activity on Isle Royale includes hiking, fishing, boating, kayaking, and observing nature. The island is covered in wilderness trails, some of which are quite challenging, with steep grades. Wheeled vehicles are not permitted on Isle Royale, such as bicycles or canoe portage devices, however wheelchairs are allowed.[12]

There are numerous campgrounds, many of which are only accessible by water. There are two small settlements on the island proper: Rock Harbor, which has a resort, a marina, and basic amenities, and Windigo, a smaller facility on the far western end of the island. Both have pay showers and food available

A typical National Park Service campground consists of a few shelters (cabin-like structures with one wall of mosquito-proof screen), individual tent sites with picnic table, and group camping sites. There are one or more pit toilets at each facility. Campgrounds along the shore have a boat dock and overnight boaters are a common sight at some campgrounds. Waterfront locations also attract canoeists and kayakers. No wells are available, thus all water is usually filtered or thoroughly boiled to prevent infection by parasites and bacteria.

The island offers approximately 170 miles (270 km) of hiking trails for everything from day hikes to a two-week circumnavigation hike.[13] "The most popular, best marked and longest single route ...is the 40-mile Greenstone Ridge Trail that extends down the island's backbone."[13] The trail leads to the peak of Mount Desor, at 1,394 feet (425 m), the highest point on the island, and passes though northwoods wilderness, and by inland glacial lakes, swamps, bogs and scenic shorelines.[13]

A number of habitats exist on the island, the primary being boreal forest, similar to neighboring Ontario and Minnesota. Upland areas along some of the ridges are effectively "balds" with exposed bedrock and a few scrubby trees, blueberry bushes, and hardy grasses. Occasional marshes exist, which are typically the by-product of beaver activities. There are also several lakes, often with wooded or marshy shores. The climate, especially in lowland areas, is heavily influenced by the cold waters of Lake Superior.

The island is well known among ecologists as the site of a long-term study of a predator-prey system, between moose and eastern timber wolves. There is a cyclical relationship between the two animals: as the moose increase in population, so do the wolves. Eventually, the wolves killed too many moose and begin to starve and lower their reproductive rates. However, the introduction of canine parvovirus by a visitor's illegal dog to the wolf population led to steep declines in the early 1980s. Dogs, cats, and other pets were then - and still are, banned from Isle Royale specifically to prevent the introduction of diseases to the wolf population.[14]

Before the self-introduction of wolves to the island (crossing winter ice from Ontario), coyotes were the primary predators for a time. Prior to that, the lynx dominated, preying on caribou and snowshoe hares. Human activities wiped out both the lynx and caribou, but some hares remain. Other common mammals are red foxes, beavers, and red squirrels. Some foxes are quite used to human contact, and can be seen prowling the campgrounds at dawn, looking for stray scraps left by unwary campers. For its part, the wolf is an elusive species which avoids human interaction. Few documented cases of direct wolf/human contact exist. Ermine have been periodically sighted around docks. Other mammals that can be seen include mink (along the various lake shores) and muskrats (occasionally at beaver ponds). Several species of bat also exist on the island.[15] Reptiles include the eastern garter snake, painted turtle, and northern redbelly snake.[16] Six species of frogs and three species of salamander also live on the island.[17] 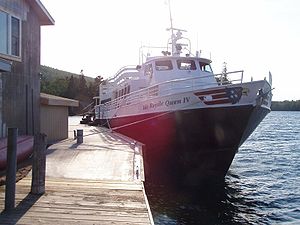 The island is accessible by private boat, seaplane, National Park Service ferry service from Houghton, Michigan (the Ranger III[18]), ferry service from Copper Harbor, Michigan (Isle Royale Queen IV), and ferry service from Grand Portage, Minnesota (Voyageur II and Sea Hunter). Scheduled ferry service runs May through September.[13] The park is open to the public from April 16 until October 31; full services are offered mid-June through Labor Day.[13] In 2008, visitors were given the option to embark/depart the NPS ship Ranger III at Windigo, on the far western end of the island. This proved to be a failure due to the extremely long boat ride and lack of ridership and was discontinued after only four trips.[citation needed]