The Isle of Ely /ˈiːli/ is an historic region around the city of Ely in Cambridgeshire, England. It used to be a county in its own right.

Its name is said to mean "island of eels", a reference to the creatures that were often caught in the local rivers for food. This etymology was first recorded by the Venerable Bede.[1] 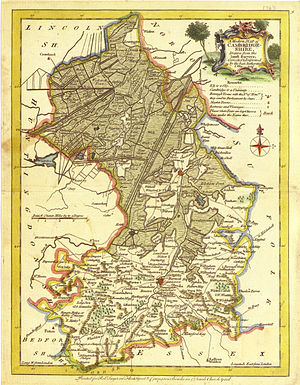 Until the 17th century, the area was an island surrounded by a large area of fenland, a type of swamp. It was coveted as an area difficult to penetrate, and was controlled in the very early medieval period by the Gyrwas, an Anglo-Saxon tribe. Upon their marriage in 652, Tondbert, a prince of the Gyrwas, presented Æthelthryth (who became St. Æthelthryth), the daughter of King Anna of the East Angles, with the Isle of Ely. She afterwards founded a monastery at Ely, which was destroyed by Viking raiders in 870, but was rebuilt and became a famous Abbey and Shrine. The Fens were ultimately drained, this began in 1626 using a network of canals designed by Dutch experts.[2] Many Fenlanders were opposed to the draining as it deprived some of them of their traditional livelihood; acts of vandalism on dykes, ditches and sluices were common, but the drainage was completed by the end of the century.[3]

The area's natural defences led to it playing a role in the military history of England. Following the Norman Conquest, the Isle became a refuge for English forces under Earl Morcar, Bishop Aethelwine of Durham and Hereward the Wake in 1071.[4] The area was taken by William the Conqueror only after a prolonged struggle.[5] In 1139 civil war broke between the forces of King Stephen and the Empress Matilda. Bishop Nigel of Ely, a supporter of Matilda, unsuccessfully tried to hold the Isle. In 1143 Geoffrey de Mandeville rebelled against Stephen, and made his base in the Isle. Geoffrey was mortally wounded at Burwell in 1144. [6]

In 1216, during the First Barons' War, the Isle was unsuccessfully defended against the army of King John. Ely took part in the Peasants' Revolt of 1381. 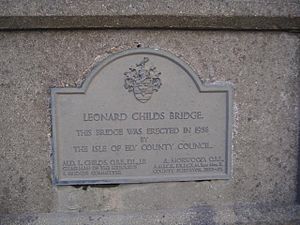 From 1107 until 1837, the Isle was under the jurisdiction of the Bishop of Ely who appointed a Chief Justice of Ely and exercised temporal powers within the Liberty of Ely. This temporal jurisdiction originated in a charter granted by King Edgar in 970, and confirmed by Edward the Confessor and Henry I to the abbot of Ely. The latter monarch established Ely as the seat of a bishop in 1107, creating the Isle of Ely a county palatine under the bishop. An act of parliament in 1535/6 ended the palatine status of the Isle, with all justices of the peace to be appointed by letters patent issued under the great seal and warrants to be issued in the king's name. However, the bishop retained exclusive jurisdiction in civil and criminal matters, and was custos rotulorum. A chief bailiff was appointed for life by the bishop, and performed the functions of high sheriff within the liberty, who also headed the government of the city of Ely.[7]

The Liberty of Ely Act 1837[8] ended the bishop's secular powers in the Isle. The area was declared a division of Cambridgeshire, with the right to appoint justices revested in the crown. Following the 1837 Act the Isle maintained separate Quarter Sessions, and formed its own constabulary.

Under the Local Government Bill of 1888, which proposed the introduction of elected county councils, the Isle was to form part of Cambridgeshire. Following the intervention of the local member of parliament, Charles Selwyn, the Isle of Ely was constituted a separate administrative county in 1889. The county was small in terms of both area and population, and its abolition was proposed by the Local Government Boundary Commission in 1947.[9] The report of the LGBC was not acted upon, and the administrative county survived until 1965. Following the recommendations of the Local Government Commission for England, on 1 April 1965 the bulk of the area was merged to form Cambridgeshire and Isle of Ely, with the Thorney Rural District going to Huntingdon and Peterborough.

The Isle of Ely County Council was granted a coat of arms on 1 May 1931. Previous to the grant the council had been using the arms of Diocese of Ely: Gules, three ducal coronets, two and one or. In the 1931 grant, silver and blue waves were added to the episcopal arms, to suggest that the county was an "isle". The crest above the shield was a human hand grasping a trident around which an eel was entwined, referring to the popular derivation of "Ely". On the wrist of the hand was a "Wake knot", representing Hereward the Wake.[10]