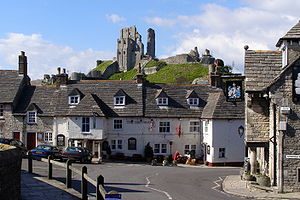 The Isle of Purbeck, not a true island but a peninsula, is in the county of Dorset, England. It is bordered by the English Channel to the south and east, where steep cliffs fall to the sea; and by the marshy lands of the River Frome and Poole Harbour to the north. Its western boundary is less well defined, with some medieval sources placing it at Flower's Barrow above Worbarrow Bay.[1] The most southerly point is St Alban's Head (archaically St. Aldhelm's Head). It is suffering erosion problems along the coast.

In terms of natural landscape areas, the southern part of the Isle of Purbeck and the coastal strip as far as Ringstead Bay in the west, have been designated as National Character Area 136 - South Purbeck by Natural England. To the north are the Dorset Heaths and to the west, the Weymouth Lowlands.[2]

The geology of the Isle is complex. It has a discordant coastline along the east and concordant coastline along the south. The northern part is Eocene clay (Barton Beds), including significant deposits of Purbeck Ball Clay. Where the land rises to the sea there are several parallel strata of Jurassic rocks, including Portland limestone and the Purbeck beds. The latter include Purbeck Marble, a particularly hard limestone that can be polished (though mineralogically, it is not marble). A ridge of Cretaceous chalk runs along the peninsula creating the Purbeck Hills, part of the Southern England Chalk Formation that includes Salisbury Plain, the Dorset Downs and the Isle of Wight. The cliffs here are some of the most spectacular in England, and of great geological interest, both for the rock types and variety of landforms, notably Lulworth Cove and Durdle Door, and the coast is part of the Jurassic Coast World Heritage Site because of the unique geology.

In the past quarrying of limestone was particularly concentrated around the western side of Swanage, the villages of Worth Matravers and Langton Matravers, and the cliffs along the coast between Swanage and St. Aldhelm's Head. The "caves" at Tilly Whim are former quarries, and Dancing Ledge, Seacombe and Winspit are other cliff-edge quarries. Stone was removed from the cliff quarries either by sea, or using horse carts to transport large blocks to Swanage. Many of England's most famous cathedrals are adorned with Purbeck marble, and much of London was rebuilt in Portland and Purbeck stone after the Great Fire of London.

By contrast, the principal ball clay workings were in the area between Corfe Castle and Wareham. Originally the clay was taken by pack horse to wharves on the River Frome and the south side of Poole Harbour. However, in the first half of the 19th century the pack horses were replaced by horse-drawn tramways. With the coming of the railway from Wareham to Swanage, most ball clay was dispatched by rail, often to the Potteries district of Staffordshire.

Quarrying still takes place in Purbeck, with both Purbeck Ball Clay and limestones being transported from the area by road. There are now no functioning quarries of Purbeck Marble. 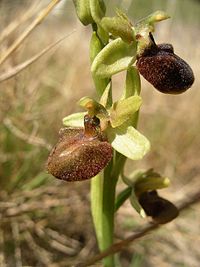 The isle has the highest number of species of native and anciently introduced wild flowers of any area of comparable size in Britain.[3] This is largely due to the varied geology. The species most frequently sought is Early Spider Orchid (Ophrys sphegodes), which in Britain, is most common in Purbeck. Nearly 50,000 flowering spikes were counted in 2009. Late April is the best time, and the largest population is usually in the field to the west of Dancing Ledge. Smaller numbers can be seen on a shorter walk in Durlston Country Park. This orchid is the logo of the Dorset Wildlife Trust. Cowslip meadows (Primula veris and Primula deorum) are at their best shortly afterwards and Durlston Country Park has several large ones.

In early May several woods have carpets of Wild Garlic (Allium ursinum). King's Wood and Studland Wood, both owned by the National Trust, are good examples. At around the same time and later some Downs have carpets of yellow Horseshoe Vetch (Hippocrepis comosa) and blue Chalk Milkwort (Polygala calcarea). In late May the field near Old Harry Rocks has a carpet of yellow Kidney Vetch (Anthyllis vulneraria).

Dorset Heath (Erica ciliaris), the county flower, can be found in July and August in large numbers, especially on and around Hartland Moor, in damper parts of the heathland. Bog Asphodel (Narthecium ossifragum) gives displays of yellow flowers there in early July. Marsh Gentian (Gentiana pneumonanthe) is found less frequently in similar areas from mid August to mid September.[3]

A number of Romano-British sites have been discovered and studied on the Isle of Purbeck, including a villa at Bucknowle Farm near Corfe Castle, excavated between 1976 and 1991.[4] The Kimmeridge shale of the isle was worked extensively during the Roman period, into jewellery, decorative panels and furniture.[5]

At the extreme southern tip of Purbeck is St Aldhelm's Chapel which is Norman work but built on a Pre-Conquest Christian site marked with a circular earthwork and some graves. In 1957 the body of a 13th-century woman was found buried NNE of the chapel which suggests there may have been a hermitage in the area. In 2000 the whole chapel site was declared a Scheduled Ancient Monument. The precise function of the chapel building is disputed with suggestions that it may have been a religious retreat, a chantry for the souls of sailors who had drowned off St Aldhelm's Head or even a lighthouse or warning bell to warn sailors. Victorian restoration work of the chapel found signs that a beacon may have adorned the roof. The present cross on the roof is Victorian.

The town of Wareham retains its Saxon earth embankment wall and it churches have Saxon origins. One of these, St Martins-on-the-Walls was built in 1030 and today contains traces of medieval and later wall paintings.

At Corfe Castle village is the great castle which gives the village its modern name. The castle commands the strategic gap in the Purbeck Ridge. The present castle dates from after the Conquest of 1066 but this may replace Saxon work as the village was the place where Saxon King Edward the Martyr had been murdered in 978. The supposed place of his murder is traditionally on, or near, the castle mound. Corfe was one of the first English castles to be built in stone - at a time when earth and timber were the norm. This may have been due to the plentiful supply of good building stone in Purbeck.

Sir John Bankes bought the castle in 1635, and was the owner during the English Civil War. His wife, Lady Mary Bankes, led the defence of the castle when it was twice besieged by Parliamentarian forces. The first siege, in 1643, was unsuccessful, but by 1645 Corfe was one of the last remaining royalist strongholds in Southern England and fell to a siege ending in an assault. In March that year Corfe Castle was demolished ('slighted') on Parliament's orders. Owned by the National Trust, the castle is open to the public. It is protected as a Grade I listed building and a Scheduled Ancient Monument.

A large part of the district is now designated as an Area of Outstanding Natural Beauty (AONB), but a portion of the coast around Worbarrow Bay and the ghost village of Tyneham is still, after nearly 60 years, in the possession of the Ministry of Defence who use it as a training area. Lulworth Ranges are part of the Armoured Fighting Vehicles Gunnery School at Lulworth Camp. Tanks and other armoured vehicles are used in this area and shells are fired. Due to safety reasons, right of entry is only given when the army ranges are not in operation. Large red flags are flown and flashing warning lamps on Bindon Hill and St Alban's Head are lit when the ranges are in use.[6] At such times the entrance gates are locked and wardens patrol the area. 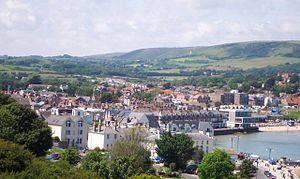 Swanage, the main town and resort of Purbeck, with the Purbeck Hills in the background.

Other places of note are: