From Infogalactic: the planetary knowledge core
Jump to: navigation, search
Not to be confused with Language isolate.

An isolating language is a type of language with a very low morpheme per word ratio. In the extreme case, each word contains a single morpheme.

Isolating languages contrast with synthetic languages, where words often consist of multiple morphemes.[1] That linguistic classification is subdivided into the classifications fusional, agglutinative, and polysynthetic, which are based on how the morphemes are combined. 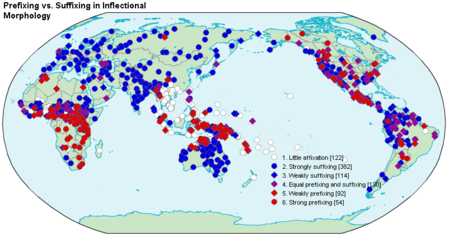 The map (contribution by Matthew Dryer to WALS) shows the global distribution of isolating languages (white); especially in Southeast Asia and Oceania.

Although historically languages were divided into three basic types (isolating, flectional, agglutinative), these traditional morphological types can be categorized by two distinct parameters:

A language is said to be more isolating than another if it has a lower morpheme per word ratio.

If English were an isolating language, "handshakes" might be rendered as "shake of hand s", with each morpheme forming a separate word.

It is perfectly possible for a language to have one inflectional morpheme yet more than one unit of meaning. For example, the Russian word vídyat/видят 'they see' has a morpheme per word ratio of 2:1, having two morphemes: the root vid-/вид-, which conveys the imperfective aspect meaning, and the inflectional morpheme -yat/-ят which inflects for three units of meaning (3rd person subject, plural subject, present/future tense). Effectively, four units of meaning in one inseparable morpheme: -yat/-ят.

Languages that are relatively more isolating have a morpheme per word ratio that approaches 1:1. A purely isolating language would lack any visible morphology, since no word would have an internal compositional structure in terms of word pieces (i.e. morphemes) – thus it would lack bound morphemes like affixes.