From Infogalactic: the planetary knowledge core
Jump to: navigation, search
This article is about mathematics. For other uses, see Isomorphism (disambiguation). 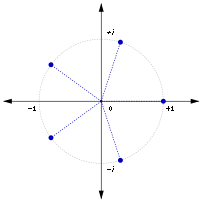 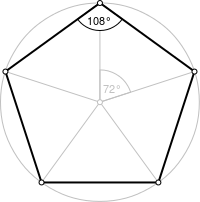 The group of fifth roots of unity under multiplication is isomorphic to the group of rotations of the regular pentagon under composition.

For most algebraic structures, including groups and rings, a homomorphism is an isomorphism if and only if it is bijective.

Isomorphisms are formalized using category theory. A morphism f : X → Y in a category is an isomorphism if it admits a two-sided inverse, meaning that there is another morphism g : Y → X in that category such that gf = 1X and fg = 1Y, where 1X and 1Y are the identity morphisms of X and Y, respectively.[1]

be the multiplicative group of positive real numbers, and let

be the additive group of real numbers.

, so it is a group homomorphism. The exponential function

, so it too is a homomorphism.

are inverses of each other. Since

is an isomorphism of groups.

is an isomorphism, it translates multiplication of positive real numbers into addition of real numbers. This facility makes it possible to multiply real numbers using a ruler and a table of logarithms, or using a slide rule with a logarithmic scale.

, the integers from 0 to 5 with addition modulo 6. Also consider the group

These structures are isomorphic under addition, if you identify them using the following scheme:

Even though these two groups "look" different in that the sets contain different elements, they are indeed isomorphic: their structures are exactly the same. More generally, the direct product of two cyclic groups

if and only if m and n are coprime.

S is reflexive, irreflexive, symmetric, antisymmetric, asymmetric, transitive, total, trichotomous, a partial order, total order, strict weak order, total preorder (weak order), an equivalence relation, or a relation with any other special properties, if and only if R is.

, then an isomorphism from X to Y is a bijective function ƒ: X → Y such that

If X = Y, then this is a relation-preserving automorphism.

In mathematical analysis, an isomorphism between two Hilbert spaces is a bijection preserving addition, scalar multiplication, and inner product.

In early theories of logical atomism, the formal relationship between facts and true propositions was theorized by Bertrand Russell and Ludwig Wittgenstein to be isomorphic. An example of this line of thinking can be found in Russell's Introduction to Mathematical Philosophy.

In cybernetics, the Good Regulator or Conant-Ashby theorem is stated "Every Good Regulator of a system must be a model of that system". Whether regulated or self-regulating an isomorphism is required between regulator part and the processing part of the system.

are equal; they are merely different presentations—the first an intensional one (in set builder notation), and the second extensional (by explicit enumeration)—of the same subset of the integers. By contrast, the sets {A,B,C} and {1,2,3} are not equal—the first has elements that are letters, while the second has elements that are numbers. These are isomorphic as sets, since finite sets are determined up to isomorphism by their cardinality (number of elements) and these both have three elements, but there are many choices of isomorphism—one isomorphism is

and no one isomorphism is intrinsically better than any other.[note 2][note 3] On this view and in this sense, these two sets are not equal because one cannot consider them identical: one can choose an isomorphism between them, but that is a weaker claim than identity—and valid only in the context of the chosen isomorphism.

Sometimes the isomorphisms can seem obvious and compelling, but are still not equalities. As a simple example, the genealogical relationships among Joe, John, and Bobby Kennedy are, in a real sense, the same as those among the American football quarterbacks in the Manning family: Archie, Peyton, and Eli. The father-son pairings and the elder-brother-younger-brother pairings correspond perfectly. That similarity between the two family structures illustrates the origin of the word isomorphism (Greek iso-, "same," and -morph, "form" or "shape"). But because the Kennedys are not the same people as the Mannings, the two genealogical structures are merely isomorphic and not equal.

Another example is more formal and more directly illustrates the motivation for distinguishing equality from isomorphism: the distinction between a finite-dimensional vector space V and its dual space V* = { φ: V → K} of linear maps from V to its field of scalars K. These spaces have the same dimension, and thus are isomorphic as abstract vector spaces (since algebraically, vector spaces are classified by dimension, just as sets are classified by cardinality), but there is no "natural" choice of isomorphism

. If one chooses a basis for V, then this yields an isomorphism: For all u. v ∈ V,

This leads to a third notion, that of a natural isomorphism: while V and V** are different sets, there is a "natural" choice of isomorphism between them. This intuitive notion of "an isomorphism that does not depend on an arbitrary choice" is formalized in the notion of a natural transformation; briefly, that one may consistently identify, or more generally map from, a vector space to its double dual,

, for any vector space in a consistent way. Formalizing this intuition is a motivation for the development of category theory.

However, there is a case where the distinction between natural isomorphism and equality is usually not made. That is for the objects that may be characterized by a universal property. In fact, there is a unique isomorphism, necessarily natural, between two objects sharing the same universal property. A typical example is the set of real numbers, which may be defined through infinite decimal expansion, infinite binary expansion, Cauchy sequences, Dedekind cuts and many other ways. Formally these constructions define different objects, which all are solutions of the same universal property. As these objects have exactly the same properties, one may forget the method of construction and considering them as equal. This is what everybody does when talking of "the set of the real numbers". The same occurs with quotient spaces: they are commonly constructed as sets of equivalence classes. However, talking of set of sets may be counterintuitive, and quotient spaces are commonly considered as a pair of a set of undetermined objects, often called "points", and a surjective map onto this set.

Generally, saying that two objects are equal is reserved for when there is a notion of a larger (ambient) space that these objects live in. Most often, one speaks of equality of two subsets of a given set (as in the integer set example above), but not of two objects abstractly presented. For example, the 2-dimensional unit sphere in 3-dimensional space

and the Riemann sphere

are three different descriptions for a mathematical object, all of which are isomorphic, but not equal because they are not all subsets of a single space: the first is a subset of R3, the second is C ≅ R2[note 4] plus an additional point, and the third is a subquotient of C2

In the context of category theory, objects are usually at most isomorphic—indeed, a motivation for the development of category theory was showing that different constructions in homology theory yielded equivalent (isomorphic) groups. Given maps between two objects X and Y, however, one asks if they are equal or not (they are both elements of the set Hom(X, Y), hence equality is the proper relationship), particularly in commutative diagrams.