By the isosceles triangle theorem, the two angles opposite the equal sides are themselves equal, while if the third side is different then the third angle is different.

By the Steiner–Lehmus theorem, every triangle with two angle bisectors of equal length is isosceles.

Euclid defined an isosceles triangle as one having exactly two equal sides,[2] but modern treatments prefer to define them as having at least two equal sides, making equilateral triangles (with three equal sides) a special case of isosceles triangles.[3] In the equilateral triangle case, since all sides are equal, any side can be called the base, if needed, and the term leg is not generally used. 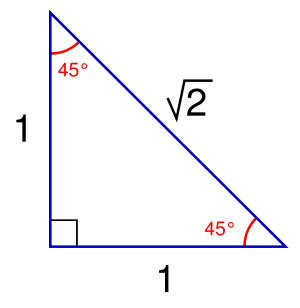 Whether the isosceles triangle is acute, right or obtuse depends on the vertex angle. In Euclidean geometry, the base angles cannot be obtuse (greater than 90°) or right (equal to 90°) because their measures would sum to at least 180°, the total of all angles in any Euclidean triangle. Since a triangle is obtuse (resp. right) if and only if one of its angles is obtuse (resp. right), an isosceles triangle is obtuse, right or acute if and only if its vertex angle is respectively obtuse, right or acute.

In an isosceles triangle the incenter (the intersection of its angle bisectors, which is the center of the incircle, that is, the circle which is internally tangent to the triangle's three sides) lies on the Euler line.

For any isosceles triangle with area T and perimeter p, we have[5]:Eq.(1)

This can be derived using the Pythagorean Theorem. The sum of the squares of half the base b and the height h is the square of either of the other two sides of length a.

By substituting the height, the formula for the area of an isosceles triangle can be derived:

If the vertex angle (θ) and leg lengths (a) of an isosceles triangle are known, then the area of that triangle is:

This is derived by drawing a perpendicular line from the base of the triangle, which bisects the vertex angle and creates two right triangles. The bases of these two right triangles are both equal to the hypotenuse times the sine of the bisected angle by definition of the term "sine". For the same reason, the heights of these triangles are equal to the hypotenuse times the cosine of the bisected angle. Using the trigonometric identity sin(θ) = 2sin(θ/2)cos(θ/2), we get:

The theorem which states that the base angles of an isosceles triangle are equal appears as Proposition I.5 in Euclid.[6] This result has been called the pons asinorum (the bridge of asses). Some say that this is probably because of the diagram used by Euclid in his demonstration of the result. Others claim that the name stems from the fact that this is the first difficult result in Euclid, and acts to separate those who can understand Euclid's geometry from those who can't.[7]

For any integer n ≥ 4, any triangle can be partitioned into n isosceles triangles.[8]

If a cubic equation has two complex roots and one real root, then when these roots are plotted in the complex plane they are the vertices of an isosceles triangle whose axis of symmetry coincides with the horizontal (real) axis. This is because the complex roots are complex conjugates and hence are symmetric about the real axis.

Either diagonal of a rhombus divides it into two congruent isosceles triangles.

The Calabi triangle, which is isosceles, is the unique non-equilateral triangle in which the largest square that fits in its interior can be positioned in any of three different ways.

If an isosceles triangle ABC with equal legs AB and BC has a segment drawn from A to a point D on ray BC, and if the reflection of AD around AC intersects ray BC at E, then BC2 = BD × BE.[10]

If the inequality is replaced by the corresponding equality, there is only one such triangle, which is equilateral.[5]:Thm.2

If the two equal sides have length a and the other side has length c, then the internal angle bisector t from one of the two equal-angled vertices satisfies[11]:p.169,#

Fallacy of the isosceles triangle

A well known fallacy is the proof (?) of the statement that all triangles are isosceles. This argument has been attributed to Lewis Carroll,[12] but W.W. Rouse Ball claims priority in this matter.[13] The fallacy is rooted in Euclid's lack of recognition of the concept of betweenness and the resulting ambiguity of inside versus outside of figures.