From Infogalactic: the planetary knowledge core
(Redirected from Isotropic)
Jump to: navigation, search
Not to be confused with isotope.
"Isotropic" redirects here. For the eye condition described as esotropic, see Esotropia.

Isotropy is uniformity in all orientations; it is derived from the Greek isos (ἴσος, "equal") and tropos (τρόπος, "way"). Precise definitions depend on the subject area. Exceptions, or inequalities, are frequently indicated by the prefix an, hence anisotropy. Anisotropy is also used to describe situations where properties vary systematically, dependent on direction. Isotropic radiation has the same intensity regardless of the direction of measurement, and an isotropic field exerts the same action regardless of how the test particle is oriented.

Within mathematics, isotropy has a few different meanings:

Isotropic manifolds
A manifold is isotropic if the geometry on the manifold is the same regardless of direction. A similar concept is homogeneity. A manifold can be homogeneous without being isotropic, but if it is inhomogeneous, it is necessarily anisotropic.
Isotropic quadratic form
A quadratic form q is said to be isotropic if there is a non-zero vector v such that q(v) = 0.
Isotropic coordinates
Isotropic coordinates are coordinates on an isotropic chart for Lorentzian manifolds.
Isotropy group
An isotropy group is the group of isomorphisms from any object to itself in a groupoid.[1]
Isotropic position
A probability distribution over a vector space is in isotropic position if its covariance matrix is the identity.

Quantum mechanics or Particle physics
When a spinless particle (or even an unpolarized particle with spin) decays, the resulting decay distribution must be isotropic in the rest frame of the decaying particle regardless of the detailed physics of the decay. This follows from rotational invariance of the Hamiltonian, which in turn is guaranteed for a spherically symmetric potential.
Kinetic theory of gases is also an example of isotropy. It is assumed that the molecules move in random directions and as a consequence, there is an equal probability of a molecule moving in any direction. Thus when there are many molecules in the gas, with high probability there will be very similar numbers moving in one direction as any other hence demonstrating approximate isotropy.

Fluid dynamics
Fluid flow is isotropic if there is no directional preference (e.g. in fully developed 3D turbulence). An example of anisotropy is in flows with a background density as gravity works in only one direction. The apparent surface separating two differing isotropic fluids would be referred to as an isotrope.

Thermal expansion
A solid is said to be isotropic if the expansion of solid is equal in all directions when thermal energy is provided to the solid.

Electromagnetics
An isotropic medium is one such that the permittivity, ε, and permeability, μ, of the medium are uniform in all directions of the medium, the simplest instance being free space.

Optics
Optical isotropy means having the same optical properties in all directions. The individual reflectance or transmittance of the domains is averaged if the macroscopic reflectance or transmittance is to be calculated. This can be verified simply by investigating, e.g., a polycrystalline material under a polarizing microscope having the polarizers crossed: If the crystallites are larger than the resolution limit, they will be visible.

Cosmology
The Big Bang theory of the evolution of the observable universe assumes that space is isotropic.[2] It also assumes that space is homogeneous.[2] These two assumptions together are known as the Cosmological Principle. As of 2006, the observations suggest that, on distance scales much larger than galaxies, galaxy clusters are "Great" features, but small compared to so-called multi-verse scenarios. Here homogeneous means that the universe is the same everywhere (no preferred origin) and isotropic implies that there is no preferred direction. 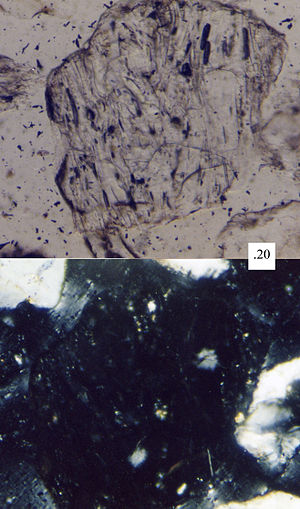 This sand grain made of volcanic glass is isotropic, and thus, stays extinct when rotated between polarization filters on a petrographic microscope

In the study of mechanical properties of materials, "isotropic" means having identical values of a property in all directions. This definition is also used in geology and mineralogy. Glass and metals are examples of isotropic materials.[3] Common anisotropic materials include wood, because its material properties are different parallel and perpendicular to the grain, and layered minerals such as slate.

Isotropic materials are useful since they are easier to shape, and their behavior is easier to predict. Anisotropic materials can be tailored to the forces an object is expected to experience. For example, the fibers in carbon fiber materials and rebars in reinforced concrete are oriented to withstand tension.

In industrial processes, such as etching steps, isotropic means that the process proceeds at the same rate, regardless of direction. Simple chemical reaction and removal of a substrate by an acid, a solvent or a reactive gas is often very close to isotropic. Conversely, anisotropic means that the attack rate of the substrate is higher in a certain direction. Anisotropic etch processes, where vertical etch-rate is high, but lateral etch-rate is very small are essential processes in microfabrication of integrated circuits and MEMS devices.

An isotropic antenna is an idealized "radiating element" used as a reference; an antenna that broadcasts power equally (calculated by the Poynting vector) in all directions. The gain of an arbitrary antenna is usually reported in decibels relative to an isotropic antenna, and is expressed as dBi or dB(i).

Cell biology
If the properties of the cell wall are more or less the same everywhere, it is said to be isotropic. The interior of the cell is anisotropic due to intracellular organelles.

Physiology
In skeletal muscle cells (a.k.a. muscle fibers), the term "isotropic" refers to the light bands (I bands) that contribute to the striated pattern of the cells.

Pharmacology
While it is well established that the skin provides an ideal site for the administration of local and systemic drugs, it presents a formidable barrier to the permeation of most substances.[4] Most recently, isotropic formulations have been used extensively in dermatology for drug delivery.[5]

Economics and Geography
An isotropic region is a region that has the same properties everywhere. Such a region is a construction needed in many types of models.