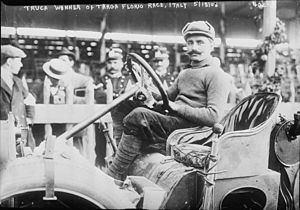 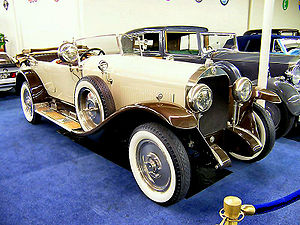 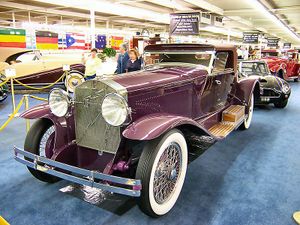 Isotta Fraschini is an Italian brand historically known for the production of cars which were among the most luxurious and prestigious ever built as well as trucks, and engines for marine and aviation use. Founded in Milan, Italy, in 1900 by Cesare Isotta and the brothers Vincenzo, Antonio and Oreste Fraschini, in 1955 it was merged with engine manufacturer Breda Motori and was renamed F.A. Isotta Fraschini e Motori Breda. However, no significant commercial success was made. The company went bankrupt in 1999. In 2000, a new company was founded, under the name of Isotta Fraschini Milano. Isotta Fraschini currently has offices in Milan and Bari.

The firm was named for its founders, Cesare Isotta and Vincenzo Fraschini, as Società Milanese Automobili Isotta, Fraschini & C., on 27 January 1900. The motto was "Import, sell, repair cars". Prior to establishing their own company in 1904, Isotta and Fraschini assembled Renaults.

The first automobile bearing this marque featured a four-cylinder engine with an output of 24 horsepower (18 kW). The car, driven by Vincenzo Fraschini, appeared in several races. In 1905, Isotta Fraschini gained notoriety in the Coppa Florio, where they entered a Tipo D with a 17.2-litre (1,050 cu in) 100 horsepower (75 kW) engine. For a short time in 1907, Isotta Fraschini merged with French automobile company Lorraine-Dietrich. The firm started making race cars using this same 100 horsepower (75 kW) engine, establishing the company's reputation and giving its name considerable cachet. It was also one of the first cars with four-wheel brakes, following their invention by Arrol-Johnston of Scotland in 1909.[1] They were also among the early pioneers of overhead cam (OHC), with an engine designed by Giustino Cattaneo.[2] Isotta Fraschini introduced their Tipo 8, the first production automobile to be powered by a straight-eight engine, at the Paris Salon in 1919[3] and began delivering them to customers in 1920.[4]

With the growth of the wealthy middle class in North America in the 1920s, Isotta Fraschini marketed deluxe limousines to the new American aristocracy. Early film stars Clara Bow and Rudolph Valentino drove Isotta Fraschinis. A 1929 Tipo 8A Castagna Transformable is featured in the 1950 film Sunset Boulevard[5] and another appears in the 1934 film Death Takes a Holiday with Fredric March. An Isotta also makes a featured appearance in the 1946 film Without Reservations with John Wayne and Claudette Colbert. Also, an Isotta Fraschini was gigolo Lindsay Marriott's car in Raymond Chandler's classic Farewell, My Lovely that was made into a motion picture starring Dick Powell and Claire Trevor. The grille of the Isotta with the lightning bolt insignia is seen parked in a ravine, right before Lindsay Marriott gets zapped to death. An oversized Isotta is also the vehicle of choice for Dick and Nicole Diver in F. Scott Fitzgerald's 1933 novel Tender is the Night.

Seriously affected by the economic crisis of the 1930s and by the disruptions of World War II, Isotta Fraschini stopped making cars after the war (1949). Only five of the last model, the Monterosa, were produced. The plants were converted to produce marine engines.

The company was left on the company register and in 1955 it was merged with engine manufacturer Breda Motori and named F.A. Isotta Fraschini e Motori Breda. The company started to produce trolley buses again and in 1960s built a new diesel engine factory in Bari. In the 1980s, the company was renamed Isotta Fraschini Motori SpA and it became part of Fincantieri group, with administrative headquarters in the old factory in Bari.

In 2000, after 100 years from the origin, a group of Italian investors, headed by an economist, acquired the rights to the trademark.[6] They founded a new company, Isotta Fraschini Milano, and a cultural foundation, Intrepida Fides.[7] A team group, based in Milan, has been set up to revive the historical spirit of Isotta Fraschini by conceiving new moving icons, such as an urban electric vehicle named <Type 0> and a hyper car. Both vehicles will be revealed by 2014.[8]