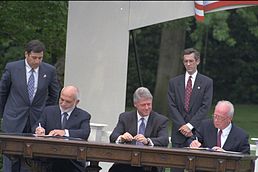 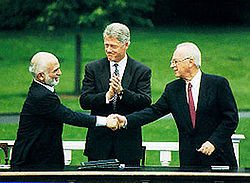 A handshake between Hussein I of Jordan and Yitzhak Rabin, accompanied by Bill Clinton, during the Israel-Jordan peace negotiations, July 25th, 1994

The Israel–Jordan peace treaty or in full "Treaty of Peace Between the State of Israel and the Hashemite Kingdom of Jordan" (Hebrew: הסכם השלום בין ישראל לירדן‎; transliterated: Heskem Ha-Shalom beyn Yisra'el Le-Yarden) (Arabic: معاهدة السلام الأردنية الإسرائيلية‎‎; Arabic transliteration: Mu'ahadat as-Salaam al-'Urdunniyah al-Isra'yliyah, sometimes referred to as Wadi Araba Treaty) was signed in 1994. The signing ceremony took place at the southern border crossing of Arabah on 26 October 1994. Jordan was the second Arab country, after Egypt, to sign a peace accord with Israel.[1]

The treaty settled relations between the two countries, adjusted land and water disputes, and provided for broad cooperation in tourism and trade. It included a pledge that neither Jordan nor Israel would allow its territory to become a staging ground for military strikes by a third country. 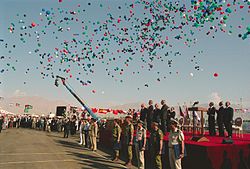 In 1987 Israeli Foreign Affairs Minister Shimon Peres and King Hussein tried secretly to arrange a peace agreement in which Israel would concede the West Bank to Jordan. The two signed an agreement defining a framework for a Middle Eastern peace conference. The proposal was not consummated due to Israeli Prime Minister Yitzhak Shamir's objection. The following year Jordan abandoned its claim to the West Bank in favor of a peaceful resolution between Israel and the PLO.[2][3]

Discussions began in 1994. Israeli Prime Minister Yitzhak Rabin and Foreign Minister Shimon Peres informed King Hussein that after the Oslo Accords with the PLO, Jordan might be "left out of the big game". Hussein consulted with Egyptian President Hosni Mubarak and Syrian President Hafez al-Assad. Mubarak encouraged him, but Assad told him only to "talk" and not sign any accord. U.S. President Bill Clinton pressured Hussein to start peace negotiations and to sign a peace treaty with Israel and promised him that Jordan's debts would be forgiven. The efforts succeeded and Jordan signed a nonbelligerency agreement with Israel. Rabin, Hussein and Clinton signed the Washington Declaration in Washington, DC, on 25 July 1994.[4] The Declaration says that Israel and Jordan ended the official state of enmity and would start negotiations in order to achieve an "end to bloodshed and sorrow" and a just and lasting peace. 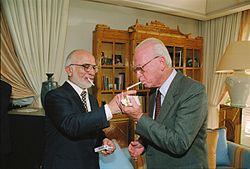 King Hussein lights Yitzhak Rabin's cigarette at the royal residence in Aqaba, shortly after the signing of the peace treaty, 26 October 1994

On 26 October 1994, Jordan and Israel signed the peace treaty[5] in a ceremony held in the Arava valley of Israel, north of Eilat and near the Jordanian border. Prime Minister Rabin and Prime Minister Abdelsalam al-Majali signed the treaty and the President of Israel Ezer Weizman shook hands with King Hussein. Clinton observed, accompanied by US Secretary of State Warren Christopher. Thousands of colorful balloons released into the sky ended the event.

Egypt welcomed the agreement while Syria ignored it. However, the Lebanese militia group Hezbollah resisted the treaty and 20 minutes prior to the ceremony launched mortar and rocket attacks against northern Galilee towns. Israeli residents, who were forced to evacuate the towns for the safety of shelters, took with them transistor radios and mobile TVs in order not to miss the historical moment of signing a second peace treaty with an Arab state.

The Peace treaty consists of a preamble, 30 articles, 5 annexes, and agreed minutes. It settles issues about territory, security, water, and co-operation on a range of subjects.[5]

Annex I concerns borders and sovereignty. Section Annex I (a) establishes an "administrative boundary" between Jordan and the West Bank, occupied by Israel in 1967, without prejudice to the status of that territory. Israel recognises Jordan's sovereignty over the Naharayim/Baqura area (including Peace Island) and the Zofar/Al-Ghamr area.[6]
Annex II concerns water and related matters. Pursuant to Article 6 of the Treaty, Jordan and Israel agreed to establish a "Joint Water Committee" (Article VII).[7]
Annex III concerns crime and drugs.[8]
Annex IV concerns environment.[9]
Annex V concerns Border Crossings, passports and visas. Article 6 stipulates that ″Each Party has the right to refuse entry to a person, in accordance with its regulations″.[10]
The Agreed Minutes of the treaty give some details about the implementation of the peace treaty.[11]

Following the agreements, Israel and Jordan opened their borders. Several border-crossings were erected, allowing tourists, businessmen and workers to travel between the two countries.[13] Israeli tourists started to visit Jordan, many to see the sela ha'adom ("Red Rock") of Petra - a stone-carved Nabatean city which had fascinated Israelis during the 50's and the 60's, often luring adventurers to visit it secretly.

In 1996 the two nations signed a trade treaty. As part of the agreement, Israel assisted in establishing a modern medical center in Amman.

In December 2013, Israel and Jordan signed an agreement to build a desalination plant on the Red Sea, near the Jordanian port of Aqaba, as part of the Red Sea–Dead Sea Canal.[14]