Folau previously played rugby league for the Melbourne Storm in the National Rugby League (NRL) from 2007 to 2008 where he broke the record for most tries in a debut year. He then played with the Brisbane Broncos from 2009 to 2010. Playing as either a wing or centre, Folau has also represented the Australian rugby league team and Queensland in State Origin matches, becoming the youngest player to play for both teams. For the 2011 season, Folau made his first code switch, joining the Greater Western Sydney Giants in the Australian Football League (AFL). In December 2012, Folau announced he was to switch codes again, signing a one-year contract with rugby union team the Waratahs.[5]

Folau was born in Minto, New South Wales, to parents of Tongan descent. He attended Lurnea Public School and Westfield Sports High School before his family moved to Brisbane in 2004.[6] In Brisbane Folau attended Marsden State High School from where he was selected for the Queensland Schoolboys squad in the Australian Under-15 Championships and also represented the Australian Schoolboys team in 2006.[7] Folau also played several seasons of junior rugby league at the Goodna Eagles in Goodna.[8]

At the Australian championships, Folau was spotted by a Melbourne Storm scout and was invited to play his junior football with the Storm's feeder club at the time, Queensland Cup team, the Norths Devils. He won a premiership while playing with Norths and became the first player to represent Queensland Under-19's while still only 16 years old. From playing with the Queensland Schoolboys and the Devils, in 2006, while in year 12 at Marsden State High School where his classmates were Chris Sandow and Antonio Winterstein,[9] Folau was selected to play in the Australian Schoolboys squad that toured Wales, England and France. Folau was strong representing Australia and at the end of the tour was awarded the Australian Secondary School Rugby Leagues (ASSRL) Award for the best back of the tournament. Playing years above his age gave Melbourne the confidence to give Folau an opportunity in the NRL. 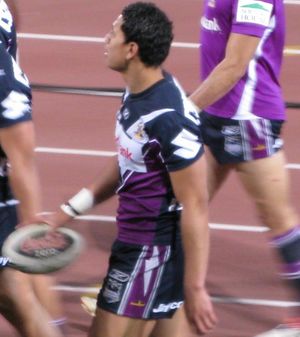 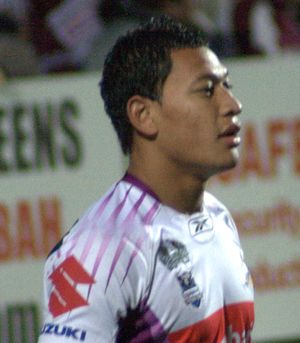 Folau was just 17 years of age when he made his debut in the 2007 NRL season. His debut came earlier than his coach Craig Bellamy intended, and he was named as a replacement on the right wing for injured Steve Turner. He started in the side's first match of the 2007 NRL season, against the Wests Tigers, and became the youngest player ever to play for the Storm.[11] In his first game, he scored the match-winning try to help Melbourne beat the Tigers 18–16. After such a solid performance in his opening game, and an injury free year, Folau went on to play in every match of the season, the only player to do so for Melbourne in 2007. Playing superbly on the wing, coach Craig Bellamy brought Folau in to play in the centres from time to time, where he would receive more ball and have more opportunity to score points. After 26 rounds Folau finished the regular season with 21 tries and 5 goals for a total of 94 career points. His try tally (21) saw him the equal regular season top-try scorer for 2007 alongside North Queensland Cowboys full-back Matt Bowen.[12]

In his rookie year Folau broke a number of club and NRL records, the most prestigious: beating fellow team-mate Billy Slater's previous NRL record of most tries in a debut season (Slater scored 19 in 2003). Folau capped off a magnificent first season in the NRL by winning the 2007 Dally M Rookie of the Year Award and being a part of the successful 2007 Melbourne Storm premiership side, that only lost three matches all year (this premiership was later taken away due to mass salary cap breaches).

Following an ankle injury to Brisbane Broncos centre Justin Hodges, Folau replaced him in the Australian test side to play New Zealand on 14 October 2007.[13] On his international debut, Folau became the youngest ever player to represent Australia at 18 years and 194 days old, passing the previous record set by Brad Fittler (18 years and 247 days) in 1990. Folau then went on to score two tries in Australia's record-breaking 58–0 defeat of New Zealand.[14]

In 2008, after Melbourne and New South Wales representative Matt King announced he would be leaving the Storm to play with the Warrington Wolves in the European Super League, Folau filled the void as the starting centre for Melbourne. After seven rounds of the 2008 season, Folau was named on the wing in the starting squad to represent Australia for the second time in the Centenary Australia vs. New Zealand test, contributing a try in the 28–12 win for the Kangaroos. Folau was then selected in the starting squad as a winger in the Queensland State of Origin Team for game I of the 2008 Series. On 21 May 2008, Folau made his debut for Queensland at ANZ Stadium Sydney. In the final minutes of the match Folau scored a try on debut, but Queensland lost 18–10 to New South Wales. Folau retained his position for game II at Suncorp Stadium in Brisbane. Folau contributed one of the Maroons' four tries in the 30 point win over the Blues, levelling the series. In the final game of the series, game III, Folau scored two leaping tries and was awarded the Man of the Match in Queensland's 16–10 win over NSW.

At the conclusion of the 2008 regular season, Folau was again honoured at the prestigious Dally M Awards night, winning the Dally M Centre of the Year award. Folau had been a part of his second minor premiership in as many years with the Melbourne Storm and played in his second consecutive grand final where they lost in a rematch of last years final to the Manly-Warringah Sea Eagles.[15] Earlier in the year away from the field, on 30 March 2008, it was announced Folau had signed with the Brisbane Broncos for the 2009 NRL season. Folau's decision to leave the Melbourne Storm at the end of 2008 was influenced by his desire to live closer to his family in Brisbane, Queensland.[16]

In October 2008, Folau was chosen to play for the Kangaroos in the 2008 Rugby League World Cup. Folau scored two tries in Australia's successful opening match against New Zealand but would not score another try all through the series despite starting in Australias' 52 – 4 win over England and 52 – 0 win over Fiji. On 22 November he took part in his first World Cup Grand Final starting in the centres for Australia. Unfortunately for Folau he would not add a World Cup Victory to his accolades as Australia lost 34 – 20 to under-dogs New Zealand. 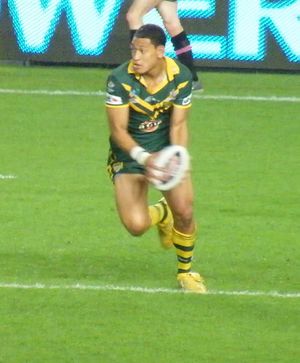 Israel Folau playing for Australia in 2008. 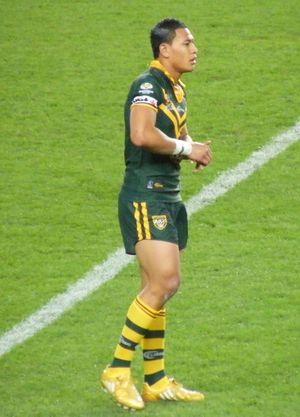 Israel Folau playing for Australia in 2008.

Folau was a major signing for the Broncos at the same time several key players, as well as coach Wayne Bennett left the club.

Folau made his debut for the Brisbane Broncos in round one of the 2009 season, scoring the team's first try in a 19–18 win over the North Queensland Cowboys. The following week, Folau again opened the scoring in the highly anticipated clash against his former club, Melbourne Storm, soaring above his former team-mates to take a catch in what would be the first try in the Broncos 16–14 win – the club's first home win over the Storm since 2005.[18] Folau continued his try-scoring feats averaging a try-a-game by Round 10. This was helped by a massive four-try haul against the Gold Coast Titans in May, equalling Brisbane Broncos Steve Renouf's record for the most tries in a single game for the Queensland club.[19]

He was selected for Australia in the one-off test match against New Zealand on 8 May 2009.[20]

In April 2009, he was named in the preliminary 25 man squad to represent Queensland in the opening match of the 2009 State of Origin series,[21] and was subsequently picked on the wing for the opening State of Origin match.[22] He also played in Game 2, scoring a try, but missed Game 3 due to injury.

Controversially despite signing mid-year with rival code the AFL, Folau was selected and played in all three Origin games in 2010. He continued to produce try-scoring form scoring 17 tries from 16 matches with the Brisbane Broncos but his rugby league career to date was cut shorter than anticipated as the Brisbane Broncos failed to make the finals series for the first time in over a decade. Folau was also overlooked to represent Australia in the Four Nations tournament and was subsequently dis-allowed by the Australian Rugby League to play for Tonga in a warm-up match against Samoa. In a further some-what controversial decision he was banned from being a member of the coaching staff as he had planned to run the water as a trainer for the Tongan team.[23] 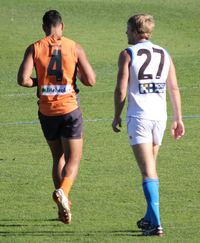 Folau (left) in an AFL match against the Gold Coast Football Club at Manuka Oval during the 2012 season.

As his contract with the Brisbane Broncos was set to expire at the end of the 2010 season Israel was linked to the Melbourne Rebels rugby union team in Super Rugby and had also been linked with a move to GWS AFL team.[24] After a three-way bidding war between Rugby league, Rugby union and Australian rules football, Folau signed a deal with the expansion Australian Football League team Greater Western Sydney, estimated to be worth up to 6 million dollars over 4 years.[25][26]

Folau began his Australian rules football playing career in the North East Australian Football League playing for the Greater Western Sydney Giants. Initially playing in defence and struggling to make an impact, it wasn't until GWS coach Kevin Sheedy moved him into the forward line that his performances improved, including 4 goals in a game against Queanbeyan Football Club.[27]

Folau made his AFL debut in the Greater Western Sydney Giants first match in the competition, against the Sydney Swans in Round 1, 2012. He gave up on his AFL career at the end of the 2012 season, and although his time playing AFL on-field has been described as a failure, he is also credited with helping to establish the Giants in Western Sydney.[28][29]

In December 2012, it was announced Folau had joined rugby union side the NSW Waratahs for the 2013 season.[5][30][31] Melbourne Rebels Coach Damien Hill said he was sceptical about how the Waratahs, or any Super Rugby club, could fit Folau under the salary cap.[32] Folau's potential positive impact in rugby union has been likened by several players and coaches to that of fellow league-turned-rugby star Sonny Bill Williams.[33][34][35][36][37][38]

Some media referred to Folau as a cash-hungry mercenary, to which Folau said: "Everyone is entitled to their opinions ... but I'll speak the truth when it's my time."[32]

Speaking in early in 2013 about his Waratahs pre-season training, Folau said he was training at both fullback and wing. Folau also said he welcomed the advice and mentorship of dual international and former Waratah Lote Tuqiri regarding the switch between league and union.[39]

In a pre-season trial match against the Melbourne Rebels, Folau scored two tries and set-up another, in a promising start to his new sporting code.[40]

Folau equalled Lote Tuqiri's tally of 10 tries in a season for Australia when he scored in the final test against Wales in the 2013 Autumn tour.[42]

In July 2015, he signed a deal to play for NTT Docomo Red Hurricanes in the Japanese Top League.[43] 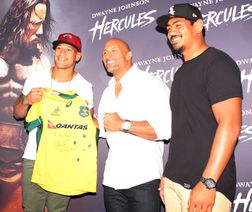 Israel Folau with Dwayne Johnson and Will Skelton in 2014. 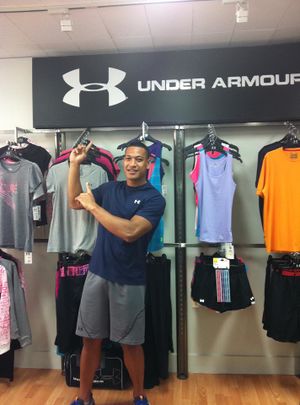 Folau was formerly an active member of The Church of Jesus Christ of Latter-day Saints.[44] He later began attending an Assemblies of God fellowship.[45]

In 2009 Folau signed a sponsorship deal with Adidas, replacing rugby union convert Mark Gasnier as the company's rugby league representative. Around the same time he also signed a two-year endorsement deal with Powerade, featuring in the product's television advertising.[46]