Israelis began migrating to the United States shortly after the founding of the state of Israel in 1948. Thus, during the 1950s 21,376 Israeli immigrants came to the US and the 1960s saw 30,911 Israeli immigrants, often seen as the first wave of Israeli immigration to the United States when 52,278 Israelis emigrated to the US according to US Immigration data.[10] A second wave of modest immigration continued with a total of 36,306 Israelis during 1970 to 1979, 43,669 in 1980 to 1989, 41,340 in 1990 to 1999 and 54,801 in 2000 to 2009. Since 2010 Israeli migration to the U.S. and has continued at around four thousand a year since. The number of immigrants in the United States born in Israel is estimated by demographers to be close to one hundred forty thousand, while the number of Israeli immigrants in the US is an issue that has been debated by laymen to be much larger, a phenomenon of overestimation of co-ethnic population common to many ethnic communities.

Israeli immigration to the United States developed during the 1980s and 1990s due to a number of reasons, including the war between Israelis and Palestinians and high taxes and lack of housing available in their homeland. Also, the acquisition of aspects of American culture (especially fashion and entertainment) in Israel caused many Israelis to want to have the economic and educational opportunities of the United States.

Since the declaration of the state of Israel, and until today many Israelis emigrated to the United States. According to the 2000 census estimated that as many as 106,839 Israelis live in the United States nowadays,[11] while other unsourced estimates say the number is much higher, around 500,000.[3][4][5] A considerable numbers of Israelis, estimated broadly from 200,000 to three times that figure, have moved abroad in the recent decades.[12] In 2012, a Global Religion and Migration Database constructed by the Pew Research Center showed that there were a total of 330,000 native-born Israelis, including 230,000 Jews, living around the world, approximately 4% of Israel's native-born Jewish population.[13][14] Based on current estimates of Israel-born Jewish migrants to the U.S. of 140,000, two thirds of Jewish Israeli native emigrants have settled in the U.S. and the remaining third in Canada, Europe, South America, South Africa and the remainder of the world. Reasons for emigration vary, but generally relate to a combination of economic and political concerns.[citation needed]

The Organisation for Economic Co-operation and Development calculated an 'expatriate rate' of 2.9 persons per thousand, putting Israel in the mid-range of expatriate rates among the 175 OECD countries examined in 2005.[15] 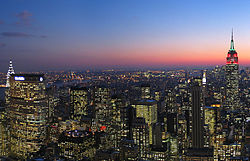 The New York City Metropolitan Area is home to by far the largest Israeli immigrant population in the United States.[7][8][9]

Various Israeli-American communities have their own newspapers which are printed in Hebrew. Communities arrange cultural, entertainment and art events (including celebrations of the Israeli independence day which usually takes place in Israeli-American demographic centers), and some have the Israeli Network channel, which consists of a selection of live broadcasts as well as reruns of Israeli television news broadcasts, entertainment programs and Israeli sport events. Hundreds of thousands of spectators view the annual Celebrate Israel Parade on Fifth Avenue in Manhattan, which touts itself as the world's largest celebration of Israel.[20][21]

According to CNN, Israeli companies are establishing in New York City and starting American entrepreneurial ventures at the rate of ten new startups per month.[22]