The Istanbul Archaeology Museums (Turkish: İstanbul Arkeoloji Müzeleri) is a group of three archeological museums located in the Eminönü district of Istanbul, Turkey, near Gülhane Park and Topkapı Palace.

It houses over one million objects that represent almost all of the eras and civilizations in world history.

In the 19th century, efforts were in place to modernize the Ottoman Empire, as many of the leading statesmen were exposed to Westernizing ideas through education and travel. The proposal to have an imperial museum came about because of the familiarity of several key players in the Ottoman political scene with the Louvre in Paris.[2] The Ottoman sultan Abdülaziz (r. 1861–1876) was impressed by the archaeological museums in Paris (30 June – 10 July 1867),[3] London (12–23 July 1867)[3] and Vienna (28–30 July 1867)[3] which he visited in the summer of 1867,[3] and ordered a similar archaeological museum to be established in Istanbul. The decision to establish an Imperial Museum under the Education Ministry came in 1869 with the appointment of a new director, but the idea of a museum was dropped with his resignation and because of budget restraints.

As education minister in 1872, Ahmet Vefik Pasha set up a museum directorship for the second time and hired the German historian, archaeologist, epigraphist and painter, Dr. Phillip Anton Dethier. He proved to be so successful at collecting materials that the idea of a purpose-built museum gained traction.

When Dethier died in 1881, painter and archaeologist Osman Hamdi Bey was appointed to the position that same year. 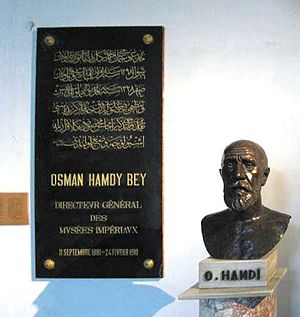 The site of the museums belonged to the Topkapı Palace outer gardens. The museum was founded by decree as the Imperial Museum (Ottoman Turkish: Müze-i Hümayun‎ or Turkish: İmparatorluk Müzesi) in 1891. The first curator and founder of the museum was Osman Hamdi Bey. Since an imperial decree protecting cultural goods in the Ottoman Empire was enforced, many governors from the provinces would send in found artefacts to the capital city. In that way the museum was able to amass a great collection. Upon its 100th anniversary in 1991, the museum received the European Council Museum Award, particularly for the renovations made to the lower floor halls in the main building and the new displays in the other buildings.

The construction of the main building was started by Osman Hamdi Bey in 1881, attaining its present neo-Greek form in 1908. The architect was Alexander Vallaury (who also designed the Pera Palace Hotel in Istanbul). The facade of the building was inspired by the Alexander Sarcophagus and Sarcophagus of the Mourning Women, both housed inside the Museum. It is one of the prominent structures built in the neoclassical style in Istanbul.

The Museum of the Ancient Orient was commissioned by Osman Hamdi Bey in 1883 as a fine arts school. Then it was reorganised as a museum, which opened in 1935. It was closed to visitors in 1963, and reopened in 1974 after restoration works on the interior.

The Tiled Kiosk was commissioned by Sultan Mehmed II in 1472. It is one of the oldest structures in Istanbul featuring Ottoman civil architecture, and was a part of the Topkapı Palace outer gardens. It was used as the Imperial Museum between 1875 and 1891 before the collection moved to the newly constructed main building. It was opened to public in 1953 as a museum of Turkish and Islamic art, and was later incorporated into the Istanbul Archaeology Museum.

The ornate Alexander Sarcophagus, once believed to be prepared for Alexander the Great, is among the most famous pieces of ancient art in the museum.[5]

The museum has a large collection of Turkish, Hellenistic and Roman artifacts. The most prominent artifacts exhibited in the museum include: