Istanbul Technical University (Tr. İstanbul Teknik Üniversitesi, commonly referred to as ITU or Technical University) is an international technical university located in Istanbul, Turkey. It is the world's third oldest [11] technical university dedicated to engineering sciences as well as social sciences recently, and is one of the most prominent educational institutions in Turkey. ITU is ranked 108th worldwide and 1st nationwide in the field of engineering/technology by THES - QS World University Rankings in 2009.[12] Graduates of İstanbul technical university have received many TUBITAK science and TUBA awards. Numerous graduates have also become members of the academy of sciences in the U.S.A, Britain and Russia. The university's basketball team, ITUSpor, is in the Turkish Basketball Second League. The university has 39 undergraduate, 144 graduate programs, 13 colleges, 346 labs and 12 research centers. Its student-to-faculty ratio is 12:1.[13]

Considered as the world's third institution of higher learning specifically dedicated to engineering education, Istanbul Technical University (ITU) has a long and distinguished history which began in 1773. ITU was founded by Sultan Mustafa III as the Imperial School of Naval Engineering (Ottoman Turkish: Mühendishane-i Bahr-i Hümayun‎), and it was originally dedicated to the training of ship builders and cartographers. In 1795 the scope of the school was broadened to train technical military staff for the modernization of the Ottoman army. In 1845 the engineering function of the school was further widened with the addition of a program devoted to the training of architects. The scope and name of the school were extended and changed again in 1883 and in 1909 the school became a public engineering school which was aimed at training civil engineers who could provide the infrastructure for the rapidly developing country. 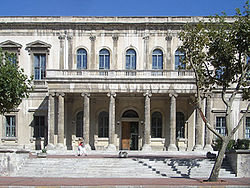 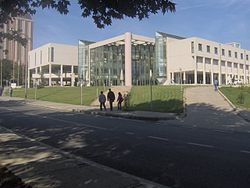 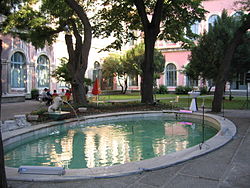 Courtyard of tr (Taşkışla), the building of School of Architecture 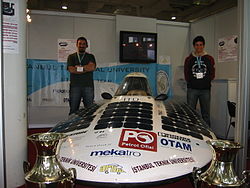 College of Electrical and Electronic Engineering

College of Computer and Informatics

College of Chemical and Metallurgical Engineering

College of Sciences and Letters

College of Aeronautics and Astronautics

There are a lot of Research Groups in ITU. Besides of these are listed below.

Finally, ITU also has the following departments / educational institutes that are not tied to any of the faculties, but serve as independent departments. These include

23 engineering departments of ITU are accredited by ABET.[32] Also ITU's faculty of architecture is accredited by NAAB[33] and faculty of maritime is accredited by IMO. Minimum score of 213 from TOEFL CBT, or success in the English proficiency exam is one of the prerequisites to register the Bachelor, Master, or Doctorate level courses at ITU. According to THES - QS World University Rankings, Istanbul Technical University is among the top 500 universities in the world and is the top university in Turkey in the field of technology and engineering.[34] Instruction is both in English and Turkish (roughly 70% and 30%, respectively or 100% for some disciplines). Master and Doctorate courses are mostly held in English. ITU is highly recognized institution in the area of engineering science in the Europe. So, ITU provides a broad range of options to its students for the Erasmus Mobility.

ITU is a public (state) university. It has five campuses, which are located in the most important areas of Istanbul. Among ITU's five campuses, the main campus of Maslak is a suburban campus, covering a total area of 2.64 km². The University Rectorate, swimming pool, stadium, along with most of the faculties, student residence halls and the central library of ITU are located there.

Another suburban campus of ITU is the Tuzla Campus. It serves the Maritime Faculty students and faculty members. It is located in the Tuzla district of Istanbul, which is a dockyard area.

The three urban campuses are near to one another and are situated close to Taksim Square.

tr (Taşkışla) Campus is where the Faculty of Architecture is located at. The Taşkışla building is one of the most renowned historical buildings in Istanbul. It dates backs to the Ottoman era and was used as military barracks.

ITU's nuclear reactor of Triga Mark-2 is in the Maslak campus. It is located at the Energy Institute.[35]

Since the foundation in 2003[36] Arı Technopolis, which is located at the Ayazağa Campus, provides companies with research, technology development and production opportunities at the university, in cooperation with the researchers and academicians. The technopolis have two buildings:Arı-1 and Arı-2. Arı-3 building in Maslak and another building in Floria are announced to build. Arı Technopolis has the 49% of export among technopolises in Turkey.[37]

NHPCC, is located at the Ayazağa Campus. It is the national center for high performance computing. The super computer of this center was one of the world's top 500 list super computers (240th).[38]

Having a suburban campus like Maslak has created the opportunity of building many sports areas. Ayazağa Gymnasium is the center of sports in ITU. Ayazağa Gymnasium also has a stadium with a seating capacity of 3500 for basketball and volleyball matches. A fitness center is also located there.

Tennis courts and an indoor olympic swimming pool, which is opened in May 2007, are also available in the Ayazaga Campus. An open-air swimming pool serves the ITU faculties. 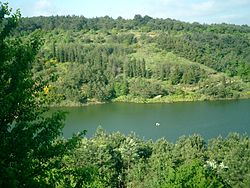 ITU offers many options to students who like doing extra-curricular work during their studying years. The most popular ones are Rock Club, Cinema Club, Model United Nations, EPGIK, International Engineering Club. Also ITU has an option for those who like to organise events and socialise with people from various European countries in the Local Board of European Students of Technology Group which had 40 members in 2007. Despite all these, it can still be a little quiet in the campus from time to time because students can choose the city of Istanbul over the campus life.

Model United Nations Society of ITU is one of the most active students club in the University. Participating in MUN conferences regularly, both domestic and international, MUN society offers an unrejectable opportunity for personal development with great fun.

Model United Nations is a conference where students participate as United Nations delegates. Participants research and formulate political positions based on the actual policies of the countries they represent.

Lady Gaga performed at the stadium on September 16, 2014 as part of her artRAVE: The ARTPOP Ball.

Most of the engineers and architects who graduated from ITU are successful on their profession. Many of the graduates take role in the development of Turkey, with many of them playing significant roles in constructing bridges, roads and buildings. For instance, Emin Halid Onat and tr (Ahmet Orhan Arda) are architects of Anıtkabir. Süleyman Demirel (civil engineer) and Turgut Özal (electrical engineer) are the two former presidents of Turkey. Necmettin Erbakan (mechanical engineer) is a former prime minister of Turkey.