The Italian Front (Italian: Fronte italiano; in German: Gebirgskrieg, "Mountain war") was a series of battles at the border between Austria-Hungary and Italy, fought between 1915 and 1918 in World War I. Following the secret promises made by the Allies in the Treaty of London, Italy entered the war in order to annex the Austrian Littoral and northern Dalmatia, and the territories of present-day Trentino and South Tyrol. Although Italy had hoped to gain the territories with a surprise offensive, the front soon bogged down into trench warfare, similar to the Western Front fought in France, but at high altitudes and with very cold winters. The front caused civil population to resettle and several thousands of them died in Italian and Austrian refugee camps of malnutrition and illness.[3] The Allied victory at Vittorio Veneto and the disintegration of Austria-Hungary ended the military operations.

While being a member of the Triple Alliance with Austria-Hungary and Germany, Italy did not declare war in August 1914, arguing that the Alliance was defensive in nature and therefore that Austria-Hungary's aggression did not obligate Italy to take part.[4] Italy had a longstanding rivalry with Austria-Hungary, dating back to the Congress of Vienna in 1815 after the Napoleonic Wars, which granted several regions on the Italian peninsula to the Austrian Empire.[4]

More importantly, a radical nationalist political movement, called Unredeemed Italy (Italia irredenta), founded in the 1880s, started claiming the Italian-inhabited territories of Austria Hungary, especially in the Austrian Littoral and in the County of Tyrol. By the 1910s, the expansionist ideas of this movement were taken up by a significant part of the Italian political elite. The annexation of those Austrian territories that were inhabited by Italians, became the main Italian war goal, assuming a similar function as the issue of Alsace-Lorraine had for the French.[4] However, of around 1.5 million people living in those areas, 45% were Italian speakers, while the rest were Slovenes, Germans and Croats. In northern Dalmatia, which was also among the Italian war aims, the Italian-speaking population was only around 5%[citation needed].

In the early stages of the war, Allied diplomats courted Italy, attempting to secure Italian participation on the Allied side, culminating in the Treaty of London of 26 April 1915 in which Italy renounced her obligations to the Triple Alliance.[5] On 23 May, Italy declared war on Austria-Hungary.[5]

Italy's entry was engineered in secret by the 1915 Treaty of London. Set up between the British Foreign Secretary Edward Grey, the Italian Foreign Minister Sidney Sonnino and the French Foreign Minister Jules Cambon.

On February 16, 1915, despite concurrent negotiations with Austria, a courier was dispatched in great secrecy to London with the suggestion that Italy was open to a good offer from the Entente. [ ...] The final choice was aided by the arrival of news in March of Russian victories in the Carpathians. Salandra began to think that victory for the Entente was in sight, and was so anxious not to arrive too late for a share in the profits that he instructed his envoy in London to drop some demands and reach agreement quickly. [...] The Treaty of London was concluded on April 26 binding Italy to fight within one month. [...] Not until May 4 did Salandra denounce the Triple Alliance in a private note to its signatories.[6]

During the Italo-Turkish War in Libya (1911–1912), the Italian military suffered equipment and munition shortages not yet repaired before Italian entry into the Great War.[7] At the opening of the campaign, Austro-Hungarian troops occupied and fortified high ground of the Julian Alps and Karst Plateau, but the Italians initially outnumbered their opponents three-to-one.

An Italian offensive aimed to capture cross the Soča (Isonzo) river, take the fortress town of Gorizia, and then enter the Karst Plateau. This offensive opened the first Battles of the Isonzo.

At the beginning of the First Battle of the Isonzo on 23 June 1915, Italian forces outnumbered the Austrians three-to-one but failed to penetrate the strong Austro-Hungarian defensive lines in the highlands of northwestern Gorizia and Gradisca. Because the Austrian forces occupied higher ground, Italians conducted difficult offensives while climbing. The Italian forces therefore failed to drive much beyond the river, and the battle ended on 7 July 1915.

Two weeks later on 18 July 1915, the Italians attempted another frontal assault against the Austro-Hungarian trench lines with more artillery in Second Battle of the Isonzo, but the forces of Austria-Hungary beat back this bloody offensive, which concluded in stalemate and exhaustion of weaponry on 3 August 1915.

The Italians recuperated, rearmed with 1200 heavy guns, and then on 18 October 1915 launched Third Battle of the Isonzo, another attack. Forces of Austria-Hungary again repulsed this Italian offensive, which concluded on 4 November without resulting gains.

The Italians again launched another offensive on 10 November, the Fourth Battle of the Isonzo. Both sides suffered more casualties, but the Austro-Hungarian forces repulsed this Italian offensive too, and the battle ended on 2 December for exhaustion of armaments, but occasional skirmishing persisted.

After the winter lull, the Italians launched the Fifth Battle of the Isonzo on 9 March 1916, but Austria-Hungary repulsed this offensive, and the battle concluded on 16 March in poor weather for trench warfare.

Following Italy's stalemate, the Austrian forces began planning a counteroffensive (Battle of Asiago) in Trentino and directed over the plateau of Altopiano di Asiago, with the aim to break through to the Po River plain and thus cutting off the II., III., and IV. Italian Armies in the North East of the country. The offensive began on 11 March 1916 with 15 divisions, and resulted in no gain.

Later battles for the Isonzo

Later in 1916, four more battles along the Isonzo river erupted. The Sixth Battle of the Isonzo, launched by the Italians in August, resulted in a success greater than the previous attacks. The offensive gained nothing of strategic value but did take Gorizia, which boosted Italian spirits. The Seventh, Eighth, and Ninth battles of the Isonzo (14 September – 4 November) managed to accomplish little except to wear down the already exhausted armies of both nations.

The frequency of offensives for which the Italian soldiers partook between May 1915 and August 1917, one every three months, was higher than demanded by the armies on the Western Front. Italian discipline was also harsher, with punishments for infractions of duty of a severity not known in the German, French, and British armies.[10]

Shellfire in the rocky terrain caused 70% more casualties per rounds expended than on the soft ground in Belgium and France. By the autumn of 1917 the Italian army had suffered most of the deaths it was to incur during the war, yet the end of the war seemed to still be an eternity away.[10] This was not the same line of thought for the Austrians. On 25 August, the Emperor Charles wrote to the Kaiser the following: "The experience we have acquired in the eleventh battle has led me to believe that we should fare far worse in the twelfth. My commanders and brave troops have decided that such an unfortunate situation might be anticipated by an offensive. We have not the necessary means as regards troops."[11]

1917: Germany arrives on the front 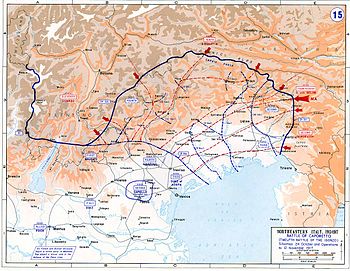 The Battle of Caporetto and the following Italian retreat to the Piave river, October–November 1917.

Following the minuscule gains of the Tenth Battle of the Isonzo, the Italians directed a two-pronged attack against the Austrian lines north and east of Gorizia. The Austrians checked the advance east, but Italian forces under Luigi Capello managed to break the Austrian lines and capture the Banjšice Plateau. Characteristic of nearly every other theater of the war, the Italians found themselves on the verge of victory but could not secure it because their supply lines could not keep up with the front-line troops and they were forced to withdraw.

The Austrians received desperately needed reinforcements after the Eleventh Battle of the Isonzo from German Army soldiers rushed in after the Russian offensive ordered by Kerensky of July 1917 failed. The Germans introduced infiltration tactics to the Austrian front and helped work on a new offensive. Meanwhile, mutinies and plummeting morale crippled the Italian Army from within. The soldiers lived in poor conditions and engaged in attack after attack that often yielded minimal or no military gain.

On 24 October 1917 the Austrians and Germans launched the Battle of Caporetto (Italian name for Kobarid) with a huge artillery barrage followed by infantry using infiltration tactics, bypassing enemy strong points and attacking on the Italian rear. At the end of the first day, the Italians had retreated 19 kilometres (12 miles) to the Tagliamento River.

Advancing deep and fast, the Austrians outran their supply lines, which forced them to stop and regroup. The Italians, pushed back to defensive lines near Venice on the Piave River, had suffered 600,000 casualties to this point in the war. Because of these losses, the Italian Government called to arms the so-called 99 Boys (Ragazzi del '99), that is, all males who were 18 years old. In November 1917, British and French started to bolster the front line. Far more decisive than Allied help in troops was Franco-British (and US) help providing strategic materials (coal, steel, etc.), which Italy always lacked sorely. In the spring of 1918, Germany pulled out its troops for use in its upcoming Spring Offensive on the Western Front.

The Austrians now began debating how to finish the war in Italy. The Austro-Hungarian generals disagreed on how to administer the final offensive. Archduke Joseph August of Austria decided for a two-pronged offensive, where it would prove impossible for the two forces to communicate in the mountains.

The Battle of the Piave River began with a diversionary attack near the Tonale Pass named Lawine, which the Italians easily repulsed after two days of fighting.[13] Austrian deserters betrayed the objectives of the upcoming offensive, which allowed the Italians to move two armies directly in the path of the Austrian prongs. The other prong, led by general Svetozar Boroević von Bojna initially experienced success until aircraft bombed their supply lines and Italian reinforcements arrived.

To the disappointment of Italy's allies, no counter-offensive followed the Battle of Piave. The Italian Army had suffered huge losses in the battle, and considered an offensive dangerous. General Armando Diaz waited for more reinforcements to arrive from the Western Front. By the end of October 1918, Austria-Hungary was falling apart. Czechoslovakia, Croatia, and Slovenia proclaimed their independence and troops started deserting, disobeying orders and retreating.

By October 1918, Italy finally had enough soldiers to mount an offensive. The attack targeted Vittorio Veneto, across the Piave. The Italian Army broke through a gap near Sacile and poured in reinforcements that crushed the Austrian defensive line. On 3 November, 300,000 Austrian soldiers surrendered.

On 3 November, Austria-Hungary sent a flag of truce to the Italian Commander to ask again for an armistice and terms of peace. The terms were arranged by telegraph with the Allied Authorities in Paris, communicated to the Austrian Commander, and were accepted. The Armistice with Austria was signed in the Villa Giusti, near Padua, on 3 November, and took effect on 4 November, at three o'clock in the afternoon. Austria and Hungary signed separate armistices following the overthrow of the Habsburg Monarchy and the collapse of the Austro-Hungarian Empire.

Cumulative casualties of the numerous battles of the Isonzo were enormous. Half of the entire Italian war casualty total – some 300,000 of 600,000 – were suffered along the Soča (Isonzo). Austro-Hungarian losses, while by no means as numerous were nevertheless high at around 400,000 (of an overall total of around 1.2 million casualties).[citation needed]

By the end of hostilities in November 1918, the Italian military had seized control of the entire portion of Dalmatia that had been guaranteed to Italy by the London Pact.[14] From 5–6 November 1918, Italian forces were reported to have reached Lissa, Lagosta, Sebenico, and other localities on the Dalmatian coast.[15] In 1918, Admiral Enrico Millo declared himself Italy's Governor of Dalmatia.[14]