Italian design refers to all forms of design in Italy, including interior design, urban design, fashion design and architectural design. Italy is recognized as being a worldwide trendsetter and leader in design: Italian architect Achille Castiglioni, Pier Giacomo Castiglioni and Luigi Caccia claims that "Quite simply, we are the best" and that "We have more imagination, more culture, and are better mediators between the past and the future".[1] Italy today still exerts a vast influence on urban design, industrial design and fashion design worldwide and Italy's iconic design has emerged into the common phrase "Made in Italy".[1] Generally, the term "design" is associated with the age of the Industrial Revolution, which arrived in Italy during the pre-unification in the Kingdom of the Two Sicilies, in this context, was born on Italian design and development in various fields such as silks San Leucio and workshops Pietrarsa, shipyards of Castellammare di Stabia. The rest of Italy was characterized by fragmented political and geographical condition and the threshold of 1860 was farming and backward. After the Unification of Italy, despite the slow consolidation of the cotton industry and factories, you could not even talk about industrialization of the country prior to 1870-80. At the beginning of the twentieth century formed the first great Italian designers such as Vittorio Ducrot and Ernesto Basile. 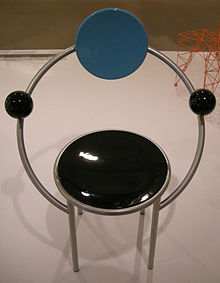 A chair by designer Michele de Lucchi, made in 1983.

Italy is a world trendsetter, and has produced some of the greatest furniture designers in the world, such as Gio Ponti and Ettore Sottsass. Italian interior design in the 1900s was particularly well-known and grew to the heights of class and sophistication. At first, in the early 1900s, Italian furniture designers struggled to create an equal balance between classical elegance and modern creativity, and at first, Italian interior design in the 1910s and 1920s was very similar to that of French art deco styles, using exotic materials and creating sumptuous furniture. However, Italian art deco reached its pinnacle under Gio Ponti, who made his designs sophisticated, elegant, stylish and raffined, but also modern, exotic and creative. In 1926, a new style of furnishing emerged in Italy, known as "Razionalismo", or "Rationalism". The most successful and famous of the Rationalists were the Gruppo 7, led by Luigi Figini, Gino Pollini and Giuseppe Terragni. There styles used tubular steel and was known as being more plain and simple, and almost Fascist in style after c. 1934. After World War II, however, was the period in which Italy had a true avant-garde in interior design. With the fall of Fascism, rise of Socialism and the 1946 RIMA exhibition, Italian talents in interior decorating were made evident, and with the Italian economic miracle, Italy saw a growth in industrial production and also mass-made furniture. Yet, the 1960s and 1970s saw Italian interior design reach its pinnacle of stylishness, and by that point, with Pop and post-modern interiors, the phrases "Bel Design" and "Linea Italiana" entered the vocabulary of furniture design.[2] Ever since the late 1970s and early 1980s, some equipment began to be logoed by notable Italian fashion houses, such as Prada, Versace, Armani, Gucci and Moschino.[1] Examples of classic pieces of Italian furniture include Zanussi's rigorous, creative and streamlined washing machines and fridges,[1] the "New Tone" sofas by Atrium,[1] and most famously the innovative post-modern bookcase, made by Ettore Sottsass for the Memphis Group in 1981, inspired by Bob Dylan's song "Stuck Inside of Mobile with the Memphis Blues Again". The bookcase became huge a cultural icon and design event of the 1980s.[1]

In addition to furniture design, Italy has also set trends for industrial design. The Moka pot, designed by Alfonso Bialetti, was a ground-breaking design upon its release in 1933, and continues to be manufactured to this day with few modifications. Olivetti is notable for its office and electronic equipment designs. In 2010 Michele Puzzolante designed the Solar Floating Island, a self-sufficient energy generator hospitality project using solar energy as sole source of power. 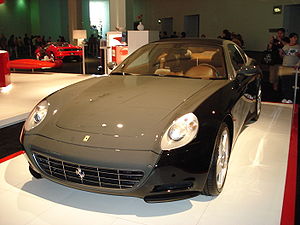 A Ferrari 612 Scaglietti Sessanta Edition. Ferraris are amongst Italy's most iconic supercars.

Italy also is very influential in car design, and has produced some of the greatest status symbols of the century.[1] The automobile industry in the nation (formerly the vehicle industry in Italy) is a quite large employer in the country, with a labour force of over 196,000 (2004) working in the industry.[3] Italy is the fifth largest automobile producer in Europe (2006).[4] Over the ages, Italian cars have been recognized worldwide for their stylishness and practicality. Famous Italian cars include the Alfa Romeo converitbles of the 1950s and the Ferrari Spider and Ferrari Formula supercars. There are also several symbolic vehicle types which are less luxurious than those cars, such as the iconic Fiat Topolino and Fiat 500, and the symbolic Vespa Piaggio, which became one of the most fashionable and affordable vehicles in Italy after World War II, being first produced in 1946.[1] Italy is also home to world-renowned car design firms such as Pininfarina, Zagato, and Bertone. 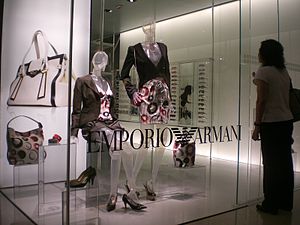 Clothes by Emporio Armani, one of the most luxurious and famous Italian fashion houses

Italian fashion is amongst the world's most important fashion designs, such as those of France, Germany, USA, Great Britain and Japan. Fashion has always been an important part of the culture of Italy, and its society. Italian designs began become one of Europe's main trendsetters eversince the 11th–16th centuries, when artistic development in Italy was at its peak. Cities such as Venice, Milan, Florence and Vicenza started to produce luxury goods, hats, cosmetics, jewelry and rich fabrics. During the 17th–early 20th centuries, Italian fashion lost its importance, and Europe's main trendsetter became France, as French fashion began to become hugely popular, eversince luxury dresses began to be designed for the courtiers of Louis XIV.[5] However, since the 1951–53 fashion soirées held by Giovanni Battista Giorgini in Florence,[6] the "Italian school" started to compete with the French haute couture, as labels such as Ferragamo and Gucci began to contend with Chanel and Dior. Currently, Milan, (Italy's center of design) is considered the true fashion capital of the world, according to the 2009 Global Language Monitor, and Rome ranked 4th.[7] Both these cities annually compete with other major international centres, such as Paris, New York, London and Tokyo. 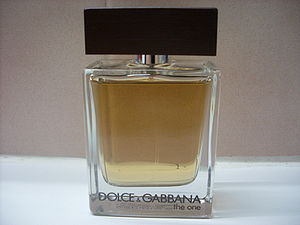 "The One", the fragrance by Dolce & Gabbana.

Examples of major Italian fashion houses are: Gucci, Armani, Emilio Pucci, Valentino, Prada, Dolce & Gabbana, Ferragamo, Roberto Cavalli, Trussardi, Versace, Krizia, Etro, Miu Miu, Laura Biagiotti, Max Mara, Fendi, Moschino, Missoni, Benetton and Brioni (fashion),[8] to name a few. Italy also is home to many fashion magazines, such as Grazia, Vogue Italia, Vera, Chi, Gioia and Donna.[9] Other Italian accessory and jewelry brands, such as Bulgari are amongst the most important in the world. Milanese company Luxottica is currently the world's most successful eyewear company, with a revenue of €5.202 billion (2008),[10] an operating income of €749.8 million (2008)[10] and a profit of €379.7 million.[10] Commercially, Italian Milan-based fashion design is far more successful than its Parisian rival.[11] Armani is well known for its minimalism and sophisticated style, Versace for its extravagant and ultra-luxurious lines, Gucci for its symbolic chicness and style, Prada for its glitz and glamour, Valentino for its supreme elegance, Dolce & Gabbana for its fantasious and outrageous dresses, Romeo Gigli for its romantic and creative ideas and Moschino for its smart/casual outfits and T-shirts.[1]