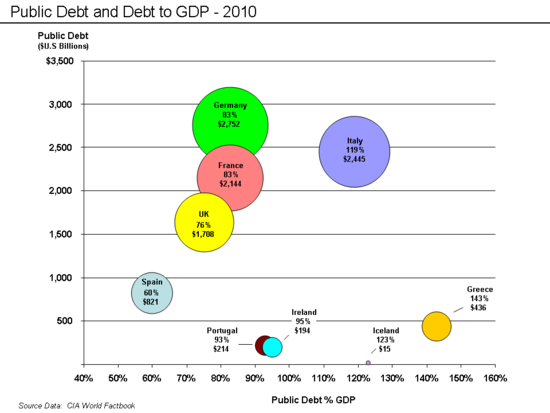 The debt to GDP ratio of selected countries, 2010. Italy is displayed in purple.

On 11 November 2011, Italian 10-year borrowing costs fell sharply from 7.5% to 6.7% after Italian legislature approved further austerity measures and the formation of an emergency government to replace that of Prime Minister Silvio Berlusconi.[8]

The measures include a pledge to raise €15 billion from real-estate sales over the next three years, a two-year increase in the retirement age to 67 by 2026, opening up closed professions within 12 months and a gradual reduction in government ownership of local services.[4] The interim government expected to put the new laws into practice was led by former European Union Competition Commissioner Mario Monti.[4]

In January 2014 the Italian government also agreed to offer citizens a chance to use a new voluntary disclosure scheme to repatriate assets held abroad, often in Swiss banks.[1] Italy has offered several tax amnesties over the past few years, and a tax amnesty in 2012 resulted in €100 billion in assets being declared and made legal at a steeply discounted tax rate.[1] In 2014, the Bank of Italy estimated that Italians held €180 billion in undeclared assets abroad, a figure that was three times as high as in 2004.[1]