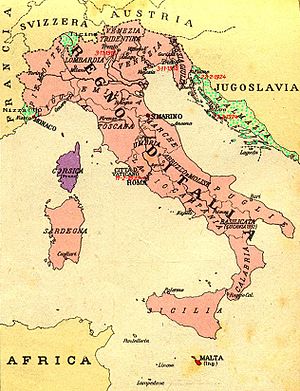 Map of the Kingdom of Italy (pink) showing the areas claimed by Italian irredentists (green, purple and red).

Italian irredentism in Corsica was a cultural and historical movement promoted by Italians and by Corsicans who identified themselves as Italian, rather than French or just Corsican, and promoted the Italian annexation of Corsica.

Corsica was part of the Republic of Genoa for centuries until 1768, when the Republic ceded the island to France, one year before the birth of Napoleon Bonaparte in the capital city of Ajaccio. Under French rule, the use of the Corsican language, which is closely related to standard Italian, has gradually declined and has been replaced by French.

Giuseppe Garibaldi promoted the unification of Corsican Italians to Italy when Rome was annexed to the Kingdom of Italy, but Victor Emmanuel II did not agree to it.

The course of Italian irredentism only marginally affected Corsica, and only during the Fascist rule of Benito Mussolini were the first organizations strongly promoting the unification of the island to the Kingdom of Italy founded.[1]

Before World War I in Livorno, professor Francesco Guerri founded the review Corsica antica e moderna, inspired on the Archivio storico di Corsica of Gioacchino Volpe. Petru Rocca created in the 1920s the Partito autonomista of Corsica (of which he was the leader) with the support of monsignor Domenico Parlotti and dr. Croce, director of the "Archivi di Stato della Corsica".

Before and during World War II, some Corsican intellectuals staged pro-Italian propaganda and cultural activities in Italy (mainly in the "Gruppi di Cultura Corsa"). These included Marco Angeli, Bertino Poli, Marchetti, Luccarotti, Grimaldi and Petru Giovacchini (he was later proposed as a possible governor of Corsica if Italy had annexed it).[2] The most renowned was Petru Giovacchini, who considered Pasquale Paoli (the hero of Corsica) as the precursor of Corsican irredentism in favor of the unification of the island to Italy.[3] The "Gruppi di Cultura Corsa" of Giovacchini reached a membership of 72,000 members by 1940, according to the historian R.H. Rainero.[4]

In November 1942 the VII Army Corps of the Regio Esercito occupied Corsica as part of the German led response to the Ally landings in Africa, leaving the island still under the formal sovereignty of Vichy France. Because of the lack of partisan resistance at first, and to avoid problems with Marshal Philippe Pétain, no Corsican units were formed under Italian control (except for a labour battalion formed in March 1943). However, a Resistance movement based on local inhabitants loyal to France and boosted by Free French leaders developed, opposing the irredentist propaganda and the Italian occupation, and was repressed by Italian fascist forces and subsequently by German troops.

Some irredentist Corsican military officials collaborated with Italy, including the retired Major Pantalacci (and his son Antonio), colonel Mondielli and colonel Petru Simone Cristofini (and his wife, the first Corsican female journalist Marta Renucci).[5] After Free French forces and Resistance forces, together with some Italian troops which sided with the Allies, retook Corsica, Petru Cristofini was executed in 1943. Of nearly 100 irrendentist collaborators (including intellectuals) put on trial by the French authorities in 1946, eight were sentenced to death, but none were executed.[citation needed] Petru Giovacchini was also condemned to death, but fled to Italy where he found refuge until his death in 1955. With him, the Italian irredentistic movement in Corsica died out, though separate movements for independence from France (like the Corsica Nazione, Partitu di a Nazione Corsa) and the terrorist organization called National Front for the Liberation of Corsica are currently active.

Colonel Pietro Cristofini (or Petru Simon Cristofini) was born in Calenzana (near Calvi, Corsica) on 26 May 1903 and in 1939 became a captain of the 3rd Algerian Fusiliers regiment. He was initially a supporter of Pétain. After the Allied occupation of French North Africa he commanded the Phalange Africaine.

In Tunisia he was wounded in one eye and then, before returning to Corsica, met Benito Mussolini in Rome. He was a supporter of the union of Corsica to Italy and defended irredentist ideals. He actively collaborated with Italian forces in Corsica during the first months of 1943. In the island he worked with Petru Giovacchini (the possible governor of Corsica if the Axis had won the war). Cristofini, as head of the Ajaccio troops, helped the Italian Army to repress Resistance opposition in Corsica before the Italian Armistice in September 1943.

He was put on trial for treason after the Allies retook Corsica, and sentenced to death. He tried to kill himself, and was executed while suffering from his wounds in November 1943. His wife, Marta Renucci, was sentenced in 1946 to 15 years of jail in Algiers for supporting irredentism and for collaborating with Italian fascism, but served only a reduced sentence.

While the Corsican language was spoken at home, until the first half of the 19th-century Italian was the language most publicly spoken and written on the island.

The first Corsican Constitution, for the short-lived Corsican Republic established in 1755, was written in Italian and Paoli proclaimed Italian as the official language of Corsica. Italian was the 'language of culture' in Corsica until the end of the 19th century.[6] Even Paoli's second Corsican Constitution, for the Anglo-Corsican Kingdom in 1794, was in Italian.[7] In the second half of the 19th century French replaced Italian, mainly because of Napoleon III. Corsican started to be used by Corsican intellectuals.

Modern Corsican (Corsu), as it is known today, is directly related to the Tuscan dialect of Pisa, an Italian city that dominated the island before Genoa. In the north of the island (Calvi), there was a local dialect (now nearly extinct) very similar to medieval Genoese. In the mountainous interior of Corsica there is a significant number of villages where nearly all the inhabitants have some proficiency of Corsican, a medieval Pisan lect mixed with Sardinian words.[8]

The extreme similarity of Corsican to Italian can be seen in an example phrase:
Corsican: Sò natu in Corsica è g'aghju passatu i megli anni di a mio ghjuventù
Italian: Sono nato in Corsica e ci ho passato i migliori anni della mia gioventù
English: I was born in Corsica and I spent there the best years of my youth

Nearly 12% of Corsicans can speak Italian, while three-quarters understand it thanks to the television programmes from Italy. [9]

The irredentist Marco Angeli di Sartèna wrote the first book in Corsican (titled Terra còrsa) in 1924 and many lyrics (titled Malincunie) in Ajaccio. He created and wrote the newspaper «Gioventù» of the "Partito Corso d'azione", partially in Italian and Corsican.

Pasquale Paoli was considered by Niccolo Tommaseo, who collected his Lettere (Letters), as one of the precursors of Italian irredentism.

The "Babbu di a Patria" (father of Corsica), as Pasquale Paoli was nicknamed by the Corsican Independentists, wrote in his Letters [10] the following message in 1768 against the French invaders: "We (Corsicans) are Italians by birth and feelings, but first of all we feel Italian by language, roots, customs, traditions and all the Italians are all brothers for History and for God.... As Corsicans we do not want to be slaves nor "rebels" and as Italians we have the right to be treated like all the other Italian brothers.... Either we'll be free or we'll be nothing.... Either we'll win or we'll die (against the French) with our weapons in our hands.... The war against France is just and holy as the name of God is holy and just, and here on our mountains will appear for all Italy the sun of liberty." ("Siamo còrsi per nascita e sentimento ma prima di tutto ci sentiamo italiani per lingua, origini, costumi, tradizioni e gli italiani sono tutti fratelli e solidali di fronte alla storia e di fronte a Dio… Come còrsi non vogliamo essere né schiavi né "ribelli" e come italiani abbiamo il diritto di trattare da pari con gli altri fratelli d’Italia… O saremo liberi o non saremo niente… O vinceremo con l’onore o soccomberemo (contro i francesi) con le armi in mano... La guerra con la Francia è giusta e santa come santo e giusto è il nome di Dio, e qui sui nostri monti spunterà per l’Italia il sole della libertà…")

Pasquale Paoli wanted the Italian language to be the official language of his Corsican Republic. His Corsican Constitution of 1755 was in Italian and was used as a model for the American constitution of 1787. Furthermore, in 1765 Paoli founded in the city of Corte the first University of Corsica (where the teaching was done in Italian).

The Italian language, promoted by the Corsican Italians, had been the language of culture in Corsica since the Renaissance. Many Corsican authors wrote an extensive literature in Italian in the last centuries.

During the 19th century in Bastia, Salvatore Viale wrote La Dionomachia in 1817, Canti popolari corsi in 1843 and Dell'uso della lingua patria in Corsica in 1858.

Many Corsican authors (who wrote in Italian) were influenced by the ideals of the Italian Risorgimento during the second half of the 19th century, such as Giuseppe Multado, Gian Paolo Borghetti, Francesco Ottaviano Renucci (Storia della Corsica dal 1789 al 1830 and Novelle storiche corse). Even the Italian Nicolo Tommaseo collected the Canti popolari corsi (with points of view of Italian irredentism) and made a compilation of the letters (Lettere di Pasquale de Paoli) of Pasquale Paoli.

Santu Casanova founded the famous literary review A Tramuntana (published in Ajaccio between 1896 and 1914) and wrote in Italian Meraviglioso testamento di Francesco in 1875 and La morte ed il funerale di Spanetto in 1892. He is considered the link between the old generations of Corsican writers who wrote in Italian language and the new ones, who started to use the Corsican language.

During the first half of the 20th century, the most important Corsican publication in Italian was the literary review A Muvra of Petru Rocca. Other Corsican authors in Italian were Domenicu Versini (nicknamed Maistrale), Matteu Rocca (I lucchetti in 1925), Dumenicu Carlotti (Pampame corse in 1926), Ageniu Grimaldi and Ugo Babbiziu (Una filza di francesismi colti nelle parlate dialettali corse in 1930).

The Corsican Italians who promoted the ideal of Corsican irredentism published mainly in Italy, because of the persecutions from the French regime in the island in the first half of the 20th century.

Thus, Petru Giovacchini wrote the poems Musa Canalinca and Rime notturne in 1933 in Corsica, but successively wrote and published Aurore, poesie corse, Corsica Nostra and Archiatri pontifici corsi in Rome (the last, while he was in exile in 1951, a few years before his premature death).