listen); January 8, 1873 – February 5, 1953) was a Romanian politician. A leader of the National Party of Transylvania and Banat before and after World War I, he served as Prime Minister of Romania for three terms during 1928–1933, and, with Ion Mihalache, co-founded the National Peasants' Party.

Maniu was born to an ethnic Romanian family in Szilágybadacsony, Austria-Hungary (now Pericani, Romania); his parents were Ioan Maniu and Clara Maniu. He finished the Calvinist College in Zalău in 1890, and studied Law at the Franz Joseph University, then at the University of Budapest and that of Vienna, being awarded the doctorate in 1896.

Maniu joined the Romanian National Party of Transylvania and Banat (PNR), became a member of its collective leadership body in 1897, and represented it in the Budapest Parliament on several occasions. He settled in Blaj, and served as lawyer for the Greek Catholic Church (to which he belonged). Maniu was influenced by the activity of Simion Bărnuțiu, a maternal uncle of his father, Ioan Maniu.

After serving as an advisor for Archduke Franz Ferdinand, counseling on the latter's projects to redefine the Habsburg states along the lines of a United States of Greater Austria, Maniu moved towards the option of a union with the Romanian Old Kingdom when the Archduke was assassinated in Sarajevo in 1914.

Together with such figures as Vasile Goldiș, Gheorghe Pop de Băsești, the Romanian Orthodox cleric Miron Cristea, and Alexandru Vaida-Voevod, he engaged in an intensive unionist campaign, leading to the Alba Iulia gathering on December 1, 1918 (during which Romanians demanded separation from Austria-Hungary). On December 2, Maniu became head of Transylvania's Directory Council - a position equivalent to interim governorship.

After the creation of Greater Romania, the PNR formed the government in Bucharest—a cabinet led by Al. Vaida-Voevod and allied with Ion Mihalache's Peasants' Party. It entered in competition with one of the traditional parties of the Romanian Kingdom, the National Liberal Party, and with its leader Ion I. C. Brătianu, when the Peasants' Party deadlocked the Parliament of Romania with calls for a widespread land reform.

After King Ferdinand I dissolved the Parliament, Iuliu Maniu found himself at odds with the national leadership, especially after the new Prime Minister Alexandru Averescu (with support from the National Liberals) dissolved the Transylvanian Council in April 1920. Consequently, Maniu refused to attend King Ferdinand's Crowning ceremony as King of Greater Romania (held in Alba Iulia, in 1922), seeing it as an attempt to tie multi-religious Transylvania to Orthodoxy. At the same time, the PNR rejected the centralization imposed by the 1923 Constitution favored by Brătianu, and demanded that any constitutional reform be passed by a Constituent Assembly, and not by a regular vote in Parliament. Citing fears that the PNL had ensured a grip over Romanian politics, the PNR and the Peasants' Party united in 1926, and Maniu was the President of the new political force, the National Peasants' Party (PNȚ), for the following seven years, and again between 1937 and 1947.

Despite its success in elections, the PNȚ was blocked out of government by the Royal Prerogative of King Ferdinand (who had preferred to nominate Brătianu, Averescu, and Prince Barbu Știrbey). Maniu publicly protested, and attempted to organize a peasants' march on Bucharest as a public show of support modeled on the Alba Iulia assembly. He also showed himself open to deals proposed by Viscount Rothermere regarding a review of the Treaty of Trianon[citation needed] and, as King Ferdinand's death approached, started negotiations with the disinherited Prince Carol (King Ferdinand's son), proposing that the latter bypass the Constitution and crown himself in Alba Iulia (as a new foundation for the Romanian Kingdom). Talks with Carol were ended abruptly after the Romanian authorities called on the United Kingdom to expel the Prince from its territory.

The PNȚ only came to power in November 1928, after both King Ferdinand and Brătianu had died (in the elections of that year, it allied itself with the Romanian Social Democratic Party and the German Party). In 1930, Maniu maneuvered against the Constitution, and, together with Gheorghe Mironescu, brought about Carol's return and deposition of his son Michael. However, Carol did not respect the terms of his agreement with Maniu, refusing to resume his marriage to Queen Elena. After alternating governments of Maniu and Vaida-Voevod that had brought the party into conflict with the King's inner circle and with his lover Magda Lupescu, and had to deal with major problems caused by the Great Depression (including the soviet backed strike actions—see Grivița Strike of 1933), Carol ultimately removed the PNȚ from national leadership.

The country moved towards an authoritarian regime formed around Carol and prompted by the rapid growth of the fascist Iron Guard. In 1937, Maniu agreed to sign an electoral pact with the Iron Guard's Corneliu Zelea Codreanu, in the hope that this would block the monarch's maneuvers. The king instead sought an agreement with other members of the political class, including the National Liberal Ion Duca and the former PNȚ politician Armand Călinescu, while clamping down on the Iron Guard—leading to a wave of similar actions in reprisal.

With the loss of Northern Transylvania, Bessarabia, and Southern Dobruja in 1940, Carol conceded power and exiled himself, leading to the creation of the National Legionary State around the Iron Guard and General Ion Antonescu, a regime which aligned Romania with Nazi Germany and the Axis. The PNȚ survived in semi-clandestinity and, after Antonescu purged the Guard, achieved some unofficial status when Maniu began holding talks with the general over several issues (notably, he called for an end to persecution of the Jews and transports of Jews to Transnistria). He remained an opponent of Antonescu, a view which he balanced with his adversity towards the Soviet Union, and joined the plotters of the pro-Allied royal coup in 1944, while expressing his resentment of the Romanian Communist Party (PCR) involvement. 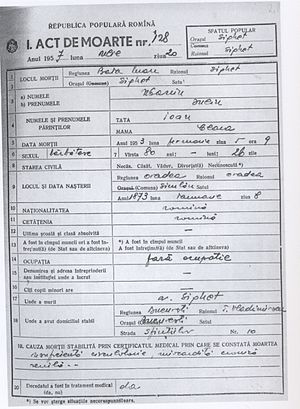 Subsequently, Maniu was a prominent supporter of the Western Allies and one of the main adversaries of growing Soviet influence in Romania. His party became the predilect target of PCR hostility. PNȚ supporters and Communists engaged in several street fights in February 1945.

The PNȚ finished a distant second in the November 1946 general election with 33 seats, well behind the Communist-dominated Bloc of Democratic Parties. After the fall of Communism, some authors went as far as to claim that the PNȚ had actually won the election, but was denied victory due to widespread electoral fraud on the part of the pro-Communist Petru Groza government.[1] Later, historian Petre Ţurlea reviewed a confidential Communist Party report about the election. He concluded that the opposition had come up short of the 80 percent vote share it had claimed at the time. However, he believed that had the election been conducted honestly, the PNȚ and the other opposition parties would have won enough votes between them to form a coalition government.[2]

After 1946, the PNȚ was sidelined, with the PCR ensuring the collaboration of several former party members, such as Nicolae L. Lupu and Anton Alexandrescu.

In a telegram to the State Department, the US representative in Romania, Burton Berry, wrote:

"The Department well knows that Maniu has stood out boldly as a champion of pro-Allied action and sentiment in Rumania even during the dark days of the Antonescu dictatorship. He has an enormous political following in the country and I believe the respect in which all Rumanians hold him eclipses that held for any other Rumanian. Because of what he has been and what he is it seems important that he be preserved from slipping into sharing the general conviction that the dissolution of the Rumanian state is now in progress."[3]

The party was outlawed in July 1947. That month, Ion Mihalache was alleged to have attempted to flee the country in an airplane which landed at Tămădău, in order to establish a government in exile (see Tămădău Affair). This was judged as treasonable, and both Maniu and Mihalache faced a kangaroo court that sentenced them to life imprisonment in a hard labour prison; given their advanced age, this amounted to a death sentence. The show trial, signaling the suppression of opposition groups, was a significant step towards the establishment of a communist regime in Romania.

Iuliu Maniu died in 1953 in Sighet prison, and his body was thrown into the common grave in the courtyard.