He was a son of Ivan Asen I of Bulgaria and Elena (religious name Evgenija). Elena, who survived until after 1235, is sometimes alleged to be a daughter of Stefan Nemanja of Serbia, but this relationship is questionable and would have caused various canonical impediments to marriages between various descendants. Ivan Asen II's father was one of the two founders of the Asen dynasty and the Second Bulgarian Empire. Under Ivan Asen II's rule, the empire would become the dominant force in the Balkans for about a decade, 1230–1241.

After the death of his uncle Kaloyan in 1207, Ivan Asen's cousin, Boril, usurped the throne and forced him to flee to the Rus principality of Galicia-Volhynia. With its support Ivan Asen returned to Bulgaria in 1218 to successfully overthrow his cousin and be crowned as emperor. Having established himself on the throne, Ivan Asen II set about recovering the losses sustained by Bulgaria during the reign of Boril. 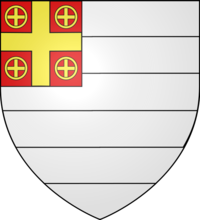 The coat of arms of Ivan Asen II.

The return of Andrew II of Hungary from the Fifth Crusade in 1218 provided an opportunity to establish a marriage alliance and to obtain (probably in 1221) the return of the disputed territories of Belgrade on the Danube as the dowry of Princess Anna Maria of Hungary. Ivan Asen II also made an alliance with Theodore Komnenos Doukas of Epirus to his south, although the latter had expanded his control over various Bulgarian-inhabited territories, including Ohrid. The alliance was cemented with the marriage of Ivan Asen II's daughter to Theodore's brother Manuel.

After the death of the Latin Emperor Robert of Courtenay in 1228, the barons in Constantinople considered Ivan Asen II as a possible choice of regent or guardian of the minor Baldwin II. By this time Theodore of Epirus had reconquered Thessalonica from the Latin Empire in 1224, had himself crowned emperor there by the autocephalous archbishop of Ohrid, had taken Adrianople and was poised to strike at Constantinople itself. Fearing Ivan Asen II's intervention in the Latin Empire, Theodore diverted his army, including many western mercenaries, northwards into Bulgaria in 1230. According to tradition, Ivan Asen II had the text of the broken treaty carried like a standard on a spear, and managed to decisively defeat and capture Theodore in the battle of Klokotnitsa. This victory allowed Ivan Asen II to sweep into Theodore's lands and to conquer the Epirote possessions from the Black Sea and Adrianople in the east to the Adriatic and Durazzo in the west.

Further south Epirus proper and the region of Thessalonica were left to Ivan Asen II's son-in-law Manuel, who governed from Thessalonica with the title of despot. The success of Ivan Asen II was due as much to his effective defeat of Theodore's army as to his humane treatment of the prisoners of war (recorded by the Byzantine historians), whom he released and allowed to return home unharmed. This restraint made it possible to readily obtain the submission of most of Theodore's fortresses.

Influence over Serbia and alliance with Nicaea

Elated by his success, Ivan Asen II caused a memorial inscription to be set up on a column in the Church of the Forty Martyrs in his capital Tărnovo, in which he boasted of defeating and capturing Theodore with the help of the martyrs, of conquering his lands, and of even acquiring the obedience of the Latins of Constantinople. But this optimism was rather hasty. By 1231 the Latin regency had finalized negotiations with John of Brienne, the former king of Jerusalem, who was invited to step in as the guardian and co-emperor of Baldwin II at Constantinople. This action led to the breach of the alliance between Bulgaria and the Latin Empire and the creation of an alternate alliance with the Empire of Nicaea.

In 1234 a Bulgarian-aided coup d'état in Serbia toppled Stefan Radoslav, a son-in-law of Theodore of Epirus, and replaced him with his brother Stefan Vladislav I, a son-in-law of Ivan Asen II. This has been seen as the extension of Bulgarian influence over Serbia, but the extent and nature of that relationship remains unclear. The two governments cooperated with each other, but Stefan Vladislav did not long survive his father-in-law's death, being overthrown by his younger brother Stefan Uroš I in 1242. In 1235 uncle of the Serbian king, the Archbishop of Serbia Saint Sava died in Tarnovo, and in 1237 Ivan Asen II allowed his nephew to transfer the prized body back to Serbia.

Hungarian invasions and Bulgarian intervention in the Latin Empire 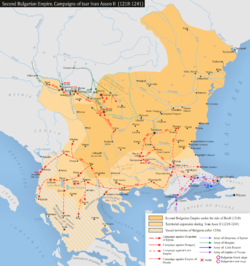 The Bulgarian Empire during the reign of Ivan Asen II.

The alliance between Bulgaria and Nicaea, directed against the Latin Empire, provoked reprisals by the papacy and the kingdom of Hungary. In 1232 the Hungarians seized the Belgrade area and attacked Sredec (Sofia), but were defeated by Ivan Asen II's brother Alexander. In 1233, under the leadership of the future king Béla IV, the Hungarians invaded again, this time seizing Little or Western Wallachia (Oltenia) and setting up the banate of Severin. It is unclear how long the Hungarians were able to hold on to their conquests, but they had been recovered by Ivan Asen II before the Mongol invasion of 1240–1241. Both the Belgrade region and the banate of Severin were reconquered by Hungary in 1246.

The new pro-Nicaean alignment of Bulgaria culminated with the marriage between Elena of Bulgaria, Ivan Asen II's daughter, and the future Theodore II Laskaris, the son of Emperor John III Doukas Vatatzes of Nicaea. The dynastic union was celebrated in 1235 and coincided with the restoration of the Bulgarian patriarchate with the consent of the eastern patriarchs. In the aftermath Ivan Asen II and John III campaigned together against the Latin Empire in Europe, effectively dividing its territories in Thrace. The death of John of Brienne in 1237 gave Ivan Asen II new hopes of intervention in the Latin Empire, to the point of projecting the marriage of a daughter with Baldwin II and even abducting his own daughter Elena, whom he had married to the heir to Nicaea. However, this change of policy came to naught the same year, when, while besieging Nicaean Caenophrurion in alliance with the Latins, Ivan Asen II received news of the simultaneous deaths of his wife, one of his children, and the Patriarch of Tarnovo. Taking these events as signs of divine displeasure, Ivan Asen II broke off the siege and returned home, sending his daughter Elena back to her husband in Nicaea.

The last years of Ivan Asen II's reign show unwillingness to fully commit on either side in the continued struggle between the Latin Empire and Nicaea. Although the Nicaean alliance was renewed, Ivan Asen II allowed Cuman detachments and a 60-thousand strong western army to cross his lands and reinforce the Latin Empire in 1240.

Following the death of his wife Anna Maria of Hungary, Ivan Asen II married Eirene, the daughter of Theodore of Epirus, who had remained a prisoner in the Bulgarian court since his capture in 1230, and had been blinded for conspiracy. According to a Byzantine author, Ivan Asen II loved Eirene "no less than Antony loved Cleopatra", and she may have been his mistress for some years before their marriage in 1237. Marrying Eirene, Ivan Asen II would have broken church canons, as his daughter from a previous marriage was married to Eirene's uncle Manuel of Thessalonica. There is moot evidence that the Bulgarian church opposed the marriage and that a patriarch (called either Spiridon or Visarion) was deposed or executed by the irate tsar. The marriage resulted in the release of Theodore, who returned to Thessalonica, chased out his brother Manuel (who retained control of Thessaly), and imposed his own son John as despot.

The last recorded action of Ivan Asen II is his defeat of a column of the Mongol army of Batu Khan in the course of its retreat from Hungary in 1241. This was not a decisive defeat, and a new Mongol invasion in 1242 forced Bulgaria to become tributary to the Golden Horde. By this time, however, Ivan Asen II was already dead, having died on 24 June 1241.

Ivan Asen II is considered, with good reason, one of the most important and successful rulers of Bulgaria. His work included the restoration of the autocephalous Bulgarian patriarchate in 1235 (after a long hiatus since 1018), the minting of the first Bulgarian non-imitation coinage in both gold and copper, the suppression of the centrifugal forces that had plagued his predecessor's reign, and the expansion of Bulgaria's frontiers in all directions. Ivan Asen II had sought to bolster the effectiveness of his state by providing for some level of administrative control and concluding a commercial treaty with the republic of Ragusa (modern Dubrovnik), a dependency of Venice. He showed restraint on the field of battle and sought to face challenges through diplomatic solutions. However, his policies exhibit considerable inconsistencies, especially in the relationship towards Nicaea and the Latin Empire. It is possible that Ivan Asen II could not decide which of these rivals was more dangerous to him or more profitable as an ally. In the long run his actions (including the victory over Theodore of Epirus and the general preference for Nicaea) secured the position of Nicaea as the Byzantine successor state best able to reconquer Constantinople. Bulgarian influence over Serbia and Thessalonica lapsed on his death. The rudimentary administrative apparatus he left behind proved insufficient to cope with the challenges of two successive minorities on the throne, and led to significant territorial losses to Nicaea, Epirus, and Hungary in 1246, not to mention Bulgaria's status as a tributary to the Golden Horde in 1242. It is difficult to say to what extent Ivan Asen II may have been able to prevent these developments, but he may be credited with presiding over a period of rare prosperity, internal peace, and external hegemony for Medieval Bulgaria.

Ivan Asen II was married three times. His first wife may be the Anna (religious name Anisia) mentioned in the Synodik of the Bulgarian Church. She may have been a concubine instead of a legitimate spouse, and she may have been the mother of his two eldest daughters:

His second wife was Anna Maria of Hungary, a daughter of King Andrew II of Hungary and Gertrude of Merania. She died in 1237 and by her he had several children, including:

By his third wife, Eirene (religious name Xene) of Thessalonica, a daughter of Theodore of Epirus and Maria Petraliphaina, he had three children: