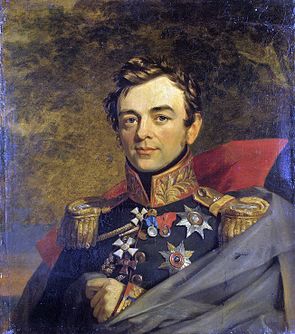 Portrait by George Dawe from the Military Gallery

Ivan Fyodorovich Paskevich (Russian: Ива́н Фёдорович Паске́вич; 19 May [O.S. 8 May] 1782 – 1 February [O.S. 20 January] 1856) was an imperial Russian military leader. For his victories, he was made Count of Erivan in 1828 and Namestnik of the Kingdom of Poland in 1831. He attained the rank of field marshal in the Russian army, and later in the Prussian and Austrian armies.

Ivan Paskevich was born in Poltava on 19 May 1782, to a well-known family of the Ukrainian Cossack gentry, he was educated at the imperial institution for pages, where his progress was rapid, and in 1800 received his commission in the Guards and was named aide-de-camp to the tsar. His first active service was in 1805, in the auxiliary army sent to the assistance of Austria against France, when he took part in the Battle of Austerlitz, 2 December 1805, where Austrian – Russian troops were defeated by the French under Napoleon.

From 1807 to 1812, Ivan Paskevich was engaged in the campaigns against Turkey, and distinguished himself by many brilliant and daring exploits, being made a general officer in his thirtieth year. During the war with France in 1812–1814 he was present, in command of the 26th division of infantry, at all the most important engagements, and he won promotion to the rank of lieutenant general.

On the outbreak of Russo-Persian War (1826–28) in 1826 he was appointed second in command, and, succeeding in the following year to the chief command gained rapid and brilliant successes which compelled the Shah to sue for peace in February 1828. In reward of his services he was created Count of Erivan and received a million rubles and a diamond-mounted sword. The Russo-Turkish War, 1828–1829 immediately followed and he successfully led the eastern or Caucasus front. For this he was made a Field Marshal at the age of forty-seven. In 1830, he was engaged in the Caucasian War on the territory of present-day Dagestan. At the same time he appointed the high-ranking Muslim cleric Mir-Fatah-Agha from Iran as head of the cently established Caucasus Committee. Paskevich hoped that by the help of Mir-Fattah's high stature in the Muslim community, he could make a very valuable contribution to the Russian consolidation of power in the Caucasus. Together with Mir-Fatah's high esteem among Muslims and his devised plans for the Caucasus, they managed to keep the entire Caucasus stable from rebellious Muslim insurrections for many years to come. 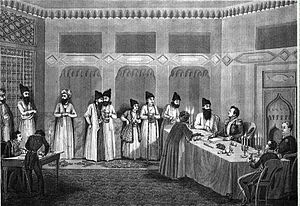 Paskevich with Abbas Mirza at the signing of the the Treaty of Turkmenchay, 1828.

Paskevich Palace in Homel, Belarus (as painted by Marcin Zaleski)

In June 1831, after the death of Field Marshal von Diebitsch, commander of Russian troops in Congress Poland, Paskevich was appointed his successor in crushing the Polish uprising. His armies, following the decisive success of Diebitsch at the Battle of Ostrołęka in May, advanced slowly, but Paskevich redeemed his reputation at the Battle of Warsaw, giving a death blow to Polish hopes of restoring independence. He was created Prince of Warsaw and awarded the office of Namestnik of the Kingdom of Poland. With the kingdom's autonomy limited by the Organic Statute of the Kingdom of Poland, the period under Namestnik Paskevich – known in Poland as the "Paskevich Night" – became infamous for political and economic repressions, as well as for Russification. 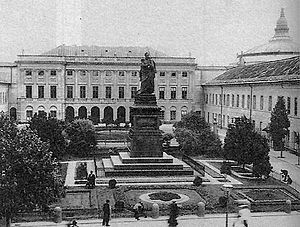 Viceregal Palace, Warsaw, with statue of Ivan Paskevich, before 1900

On the outbreak of the Hungarian Revolution of 1848 he was appointed to command the Russian troops sent to aid Austria, and finally compelled the Hungarians' surrender at Világos.

In 1854 Paskevich took command of the Army of the Danube, which was then engaging the Turks in the initial stage of the conflict which evolved into the Crimean War. Though he laid siege to Silistria, Paskevich advocated aborting the campaign due to Austria's threat to intervene in the war. On 9 June he suffered a combat injury and was compelled to return to Russia, handing command of the army to General Mikhail Dmitrievich Gorchakov. Paskevich died in Warsaw, where in 1870 a memorial was erected to him before the Koniecpolski Palace. His remains were reburied by his son in the family mausoleum on the grounds of the Homel Palace.