Ivan V Alekseyevich (Russian: Иван V Алексеевич, 6 September [O.S. 27 August] 1666 – 8 February [O.S. 29 January] 1696) was a joint Tsar of Russia (with his younger half-brother Peter I) who co-reigned between 1682 and 1696. He was the youngest son of Alexis I of Russia and Maria Miloslavskaya. His reign was only formal, since he had serious physical and mental disabilities. He sat still for hours at a time[1] and needed assistance in order to walk.

Ivan V was the 11th child of Tsar Alexis. As he was an eyesore and infirm, his capacity for supreme power was challenged by the party of the Naryshkin family, who aspired to bring Natalia Naryshkina's son, Peter I, to the throne. Upon the death of Feodor III of Russia in April 1682, their enemies insinuated that the Naryshkins had Ivan strangled, thus fomenting the Moscow Uprising of 1682, which was put to an end only after Ivan was demonstrated by his relatives to the furious crowd. 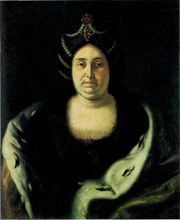 Ivan had a very close relationship with his stepmother and half-brother/co-Tsar Peter. He did not really want to become Tsar but was persuaded to.

On 25 June the same year, Ivan and Peter were crowned in the Cathedral of the Dormition as "dvoetsarstvenniki" (double tsars). A special throne with two seats was executed for the occasion (now on display in the Kremlin Armoury). Although Ivan was considered the "senior tsar", actual power was wielded by his elder sister, Sophia Alekseyevna. In 1689, when she realized that power was slipping from her hands, she attempted to raise another riot, speculating that the Naryshkins had destroyed Ivan's crown and were poised to set his room on fire. However, Ivan's tutor, Prince Prozorovsky, persuaded him to change sides, whereupon Ivan declared his allegiance to his brother's cause.

During the last decade of his life, Ivan was completely overshadowed by the more energetic Peter I. He spent his days with his wife, Praskovia Saltykova, caring about little but "praying and fasting day and night". Ivan's purported debility did not prevent him from producing robust offspring in the shape of five daughters, one of whom — Anna Ivanovna — would assume the throne in 1730. His granddaughter through another child, Anna Leopoldovna would become a non-crowned ruler of Russia. Her son and Ivan's great-grandson, Ivan VI would be the last Russian emperor among the issue of Maria Miloslavskaya, the first wife of Tsar Alexis. The last surviving descendant of Ivan V, Catherine Antonovna of Brunswick, died in 1807 after being imprisoned for her entire life.

At the age of 27 he was described by foreign ambassadors as senile, paralytic and almost blind. He died two years later and was interred in the Archangel Cathedral.

For many years Ivan was treated like a puppet ruler of Muscovy. His largest ruling influence was his older sister Sophia. She vied for power along with Ivan and her half brother Peter, and is even blamed for the murders of Peter's mother and immediate family. Due to this and other situations tension arose between the two groups of Tsar Alexis's children. After Ivan's death on 8 February 1696 his half brother Peter I was left to become supreme ruler and Tsar of all of Russia. The struggle for power between the family had finally come to an end, and Peter was left to bring Russia into a new age.[2]