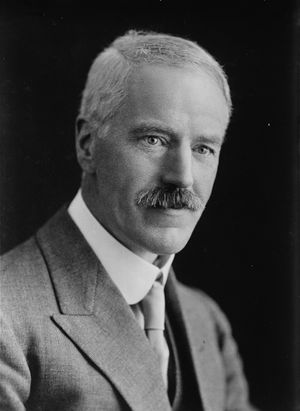 Atkins at the Worcester Cathedral organ 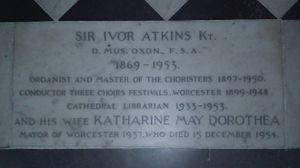 Worcester Cathedral, grave of Sir Ivor Atkins and his wife in the nave

Sir Ivor Algernon Atkins (29 November 1869 – 26 November 1953) was the choirmaster and organist at Worcester Cathedral from 1897 to 1950. He is well known for editing Allegri's Miserere with the famous top-C part for the treble. He is also well known for The Three Kings, an arrangement of a song by Peter Cornelius as a choral work for Epiphany.

Born into a Welsh musical family at Llandaff, Atkins graduated with a bachelor of music degree from The Queen's College, Oxford in 1892, and subsequently obtained a Doctorate in Music (Oxford). He was assistant organist of Hereford Cathedral (1890-1893) and organist of St Laurence Church, Ludlow from 1893 to 1897.

He was knighted in 1921 for services to music and was President of the Royal College of Organists from 1935 to 1936.

He was a friend of Edward Elgar, who in 1904 dedicated the third of his Pomp and Circumstance Marches to him. Sir Ivor Atkins' wife, Katherine, was Mayor of Worcester in 1937. Their ashes were interred in Worcester Cathedral.