From Infogalactic: the planetary knowledge core
Jump to: navigation, search
For other uses, see Ivory (disambiguation). 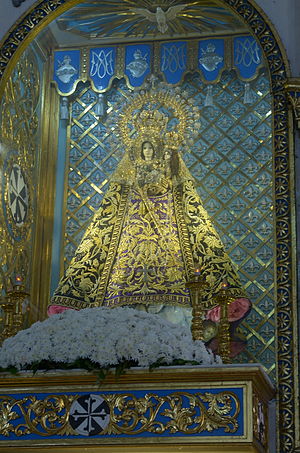 The solid ivory image of Our Lady of Manaoag in her imperial regalia. Genuine ivory is held more valuable than gold among Santero artisans. Pangasinan, Philippines. 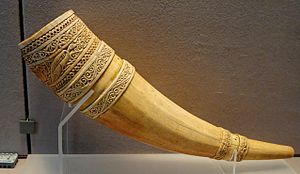 Ivory is a hard, white material from the tusks (traditionally elephant's) and teeth of animals, that can be used in art or manufacturing. It consists mainly of dentine (inorganic formula Ca10(PO4)6(CO3).H2O)), one of the physical structures of teeth and tusks. The chemical structure of the teeth and tusks of mammals is the same, regardless of the species of origin. The trade in certain teeth and tusks other than elephant is well established and widespread; therefore, "ivory" can correctly be used to describe any mammalian teeth or tusks of commercial interest which are large enough to be carved or scrimshawed.[1] It has been valued since ancient times for making a range of items, from ivory carvings to false teeth, fans, and dominoes.[2] Elephant ivory is the most important source, but ivory from mammoth, walrus, hippopotamus, sperm whale, killer whale, narwhal and wart hog are used as well.[3][4] Elk also have two ivory teeth, which are believed to be the remnants of tusks from their ancestors.[5]

The national and international trade in ivory of threatened species such as African and Asian elephants is illegal.[6] The word ivory ultimately derives from the ancient Egyptian âb, âbu ("elephant"), through the Latin ebor- or ebur.[7] 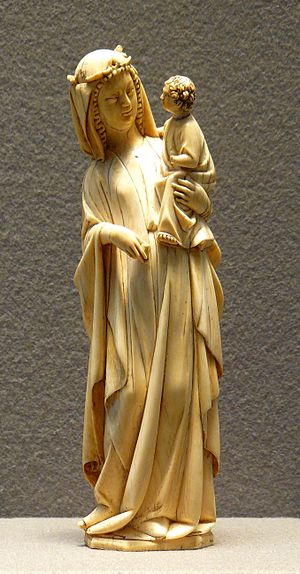 A depiction of the Blessed Virgin Mary and the Child Jesus crafted in elephant ivory. 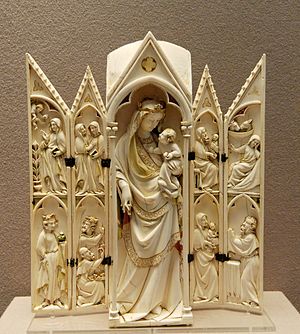 Both the Greek and Roman civilizations practiced ivory carving to make large quantities of high value works of art, precious religious objects, and decorative boxes for costly objects. Ivory was often used to form the white of the eyes of statues.

The Syrian and North African elephant populations were reduced to extinction, probably due to the demand for ivory in the Classical world.[8]

The Chinese have long valued ivory for both art and utilitarian objects. Early reference to the Chinese export of ivory is recorded after the Chinese explorer Zhang Qian ventured to the west to form alliances to enable the eventual free movement of Chinese goods to the west; as early as the first century BC, ivory was moved along the Northern Silk Road for consumption by western nations.[9] Southeast Asian kingdoms included tusks of the Indian elephant in their annual tribute caravans to China. Chinese craftsmen carved ivory to make everything from images of deities to the pipe stems and end pieces of opium pipes.[10]

The Buddhist cultures of Southeast Asia, including Myanmar, Thailand, Laos and Cambodia, traditionally harvested ivory from their domesticated elephants. Ivory was prized for containers due to its ability to keep an airtight seal. It was also commonly carved into elaborate seals utilized by officials to "sign" documents and decrees by stamping them with their unique official seal.[11]

Ivory usage in the last thirty years has moved towards mass production of souvenirs and jewelry. In Japan, the increase in wealth sparked consumption of solid ivory hanko - name seals - which before this time had been made of wood. These hanko can be carved out in a matter of seconds using machinery and were partly responsible for massive African elephant decline in the 1980s, when the African elephant population went from 1.3 million to around 600,000 in ten years.[12][13] 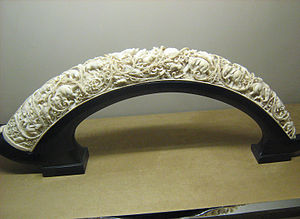 Prior to the introduction of plastics, ivory had many ornamental and practical uses, mainly because of the white color it presents when processed. It was formerly used to make cutlery handles, billiard balls, piano keys, Scottish bagpipes, buttons and a wide range of ornamental items.

Synthetic substitutes for ivory in the use of most of these items have been developed since 1800: the billiard industry challenged inventors to come up with an alternative material that could be manufactured;[14]:17 the piano industry abandoned ivory as a key covering material in the 1970s.

Ivory can be taken from dead animals – however, most ivory came from elephants that were killed for their tusks. For example, in 1930 to acquire 40 tons of ivory required the killing of approximately 700 elephants.[15] Other animals which are now endangered were also preyed upon, for example, hippos, which have very hard white ivory prized for making artificial teeth.[16] In the first half of the 20th century, Kenyan elephant herds were devastated because of demand for ivory, to be used for piano keys.[17] 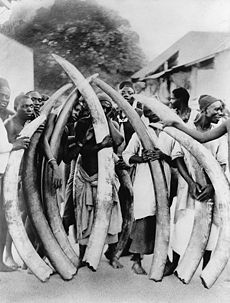 Owing to the rapid decline in the populations of the animals that produce it, the importation and sale of ivory in many countries is banned or severely restricted. In the ten years preceding a decision in 1989 by CITES to ban international trade in African elephant ivory, the population of African elephants declined from 1.3 million to around 600,000. It was found by investigators from the Environmental Investigation Agency (EIA) that CITES sales of stockpiles from Singapore and Burundi (270 tonnes and 89.5 tonnes respectively) had created a system that increased the value of ivory on the international market, thus rewarding international smugglers and giving them the ability to control the trade and continue smuggling new ivory.[12][13]

Since the ivory ban, some southern African countries have claimed their elephant populations are stable or increasing, and argued that ivory sales would support their conservation efforts. Other African countries oppose this position, stating that renewed ivory trading puts their own elephant populations under greater threat from poachers reacting to demand. CITES allowed the sale of 49 tonnes of ivory from Zimbabwe, Namibia and Botswana in 1997 to Japan.[18][19]

In 2007 eBay, under pressure from the International Fund for Animal Welfare, banned all international sales of elephant-ivory products. The decision came after several mass slaughters of African elephants, most notably the 2006 Zakouma elephant slaughter in Chad. The IFAW found that up to 90% of the elephant-ivory transactions on eBay violated their own wildlife policies and could potentially be illegal. In October 2008, eBay expanded the ban, disallowing any sales of ivory on eBay.

A more recent sale in 2008 of 108 tonnes from the three countries and South Africa took place to Japan and China.[20][21] The inclusion of China as an "approved" importing country created enormous controversy, despite being supported by CITES, the World Wide Fund for Nature and Traffic.[22] They argued that China had controls in place and the sale might depress prices. However, the price of ivory in China has skyrocketed.[23] Some believe this may be due to deliberate price fixing by those who bought the stockpile, echoing the warnings from the Japan Wildlife Conservation Society on price-fixing after sales to Japan in 1997,[24] and monopoly given to traders who bought stockpiles from Burundi and Singapore in the 1980s.

Despite arguments prevailing on the ivory trade for the last thirty years through CITES, there is one fact upon which virtually all informed parties now agree - poaching of African elephants for ivory is now seriously on the increase.[25][26][27]

The debate surrounding ivory trade has often been depicted as Africa vs the West. However, in reality the southern Africans have always been in a minority within the African elephant range states. To reiterate this point, 19 African countries signed the "Accra Declaration" in 2006 calling for a total ivory trade ban, and 20 range states attended a meeting in Kenya calling for a 20-year moratorium in 2007.[28]

In Asia, wild elephant populations are now a fraction of what they were in historic times, and poaching of elephants continues. Elephants are now close to extinction in China, Vietnam, Laos PDR, Cambodia and Indonesia. Instances of theft of even domestic elephants for their ivory have been recorded in Myanmar. 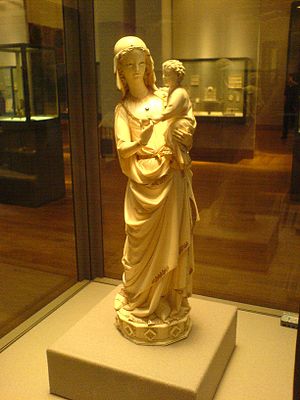 The ivory image Virgin and Child from the Sainte-Chapelle, currently housed in the Louvre Museum.

The use and trade of elephant ivory have become controversial because they have contributed to seriously declining elephant populations in many countries. It is estimated that consumption in Great Britain alone in 1831 amounted to the deaths of nearly 4,000 elephants. In 1975, the Asian elephant was placed on Appendix One of the Convention on International Trade in Endangered Species (CITES), which prevents international trade between member countries. The African elephant was placed on Appendix One in January 1990. Since then, some southern African countries have had their populations of elephants "downlisted" to Appendix Two, allowing sale of some stockpiles.[12][29][30][31][32]

China was the biggest market for poached ivory but announced they would phase out the legal domestic manufacture and sale of ivory products in May, 2015, and in September 2015 China and the U.S.A. "said they would enact a nearly complete ban on the import and export of ivory." [1]. 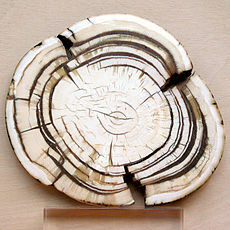 Section through the ivory tooth of a mammoth

Trade in the ivory from the tusks of dead mammoths has occurred for 300 years and continues to be legal. Mammoth ivory is used today to make handcrafted knives and similar implements. Mammoth ivory is rare and costly, because mammoths have been extinct for millennia, and scientists are loath to sell museum-worthy specimens in pieces.[33] Some estimates suggest that 10 million mammoths are still buried in Siberia.[34]

A species of hard nut is gaining popularity as a replacement for ivory, although its size limits its usability. It is sometimes called vegetable ivory, or tagua, and is the seed endosperm of the ivory nut palm commonly found in coastal rainforests of Ecuador, Peru and Colombia.[35]