Jägermeister (/ˈjeɪɡərˌmaɪstər/, YAY-gər-MYS-tər, German: [ˈjɛːɡɐˌmaɪstɐ]) is a German digestif[1] made with 56 herbs and spices at a strength of 35% alcohol by volume (61 degrees proof, or US 70 proof). It is the flagship product of Mast-Jägermeister SE, headquartered in Wolfenbüttel, south of Braunschweig, Lower Saxony, Germany.

Curt Mast, the original distiller of Jägermeister and son of the founder Wilhelm, was an enthusiastic hunter.[2]

The name when literally translated means "Hunting Master"[3] It is a title for a high-ranking official in charge of matters related to hunting and gamekeeping. The term Jägermeister had existed as a job title for many centuries. It was redefined in 1934 in the new Reichsjagdgesetz (Imperial Hunting Law), which applied the term to senior foresters, game wardens, and gamekeepers in the German civil service.

Hermann Göring was appointed Reichsjägermeister (Imperial Gamekeeper) when the new hunting law was introduced. Thus, when Jägermeister was introduced in 1935, its name was already familiar to Germans—it was sometimes called "Göring-Schnaps."[4]

Jägermeister came to greater international attention particularly through the work of Sidney Frank, who ran an American liquor import company. He promoted the drink at the youth and student market, as a drink for parties, a quite different niche to its traditional conservative brand position in its native market.[5] New York magazine quoted a market research firm as describing him as a 'promotional genius' for making "a liqueur with an unpronounceable name...drunk by older, blue-collar Germans as an after-dinner digestive aid...synonymous with ‘party’."[6] The Mast-Jägermeister company ultimately purchased Sidney Frank Importing in 2015.[7]

In 2012, Jägermeister launched premixed drinks as a brand extension. The drinks come in two flavours, "raw" and "ginger lime".[8]

Jägermeister is a type of liqueur called Kräuterlikör (herbal liqueur). It is akin to other European liqueurs, such as Gammel Dansk from Denmark, Beerenburg from the Netherlands, Unicum from Hungary, Becherovka from the Czech Republic, Demänovka from Slovakia, Pelinkovac from Croatia, Riga Black Balsam from Latvia, Gorki List from Serbia, and Chartreuse and Bénédictine from France. In contrast to those beverages, Jägermeister has a sweeter taste.

Jägermeister’s ingredients include 56 herbs, fruits, roots, and spices, including citrus peel, licorice, anise, poppy seeds, saffron, ginger, juniper berries, and ginseng.[9] These ingredients are ground, then steeped in water and alcohol for 2–3 days. Afterwards, this mixture is filtered and stored in oak barrels for about a year. When a year has passed, the liqueur is filtered again, then mixed with sugar, caramel, and alcohol.

Contrary to rumour, Jägermeister does not contain deer or elk blood.[9] 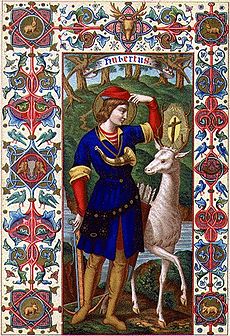 An icon of Saint Hubertus depicting his vision of a cross between the antlers of a stag.

In the product name on the label, we see one of the few surviving examples of the use of the long s in print.

The label contains the following verse from the poem Weidmannsheil, by the forester, hunter, and ornithologist Oskar von Riesenthal (1830–1898); von Riesenthal is not credited on the label.[14]

According to Mast-Jägermeister SE,[15] the translation is:

It is the hunter’s honour that he
Protects and preserves his game,
Hunts sportsmanlike, honours the
Creator in His creatures.

A loose translation which preserves the rhyme and meter is:

This is the hunter’s badge of glory,
That he protect and tend his quarry,
Hunt with honour, as is due,
And through the beast to God is true. 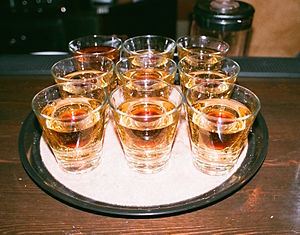 Jägerbomb cocktails in an Athens bar 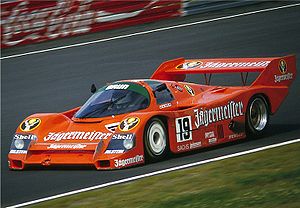 From the 1970s, the Jägermeister brand has developed an association with motor racing, as they have sponsored various European racing teams, primarily those who fielded BMWs[19] and Porsches. These teams have competed in various major racing series including Formula One (March and EuroBrun), DRM (Max Moritz,[20] Kremer, Zakspeed), DTM and Group C (Brun Motorsport), who took the team title in the 1986 World Sportscar Championship.

Jägermeister's orange livery is one of the more commonly recognised in motorsport. The Spanish Fly slot car brand has recently brought out model cars with the distinctive design. More recently, they introduced the Naylor Racing NHRA Pro Stock car, minus its signature orange livery.[21] The livery’s notability was proven when an article in the January 31, 2008, edition of Autosport listed it as one of the twenty most iconic commercial colour schemes.[22]

Jägermeister is associated with German football, especially the Bundesliga. In 1973, Eintracht Braunschweig became the first Bundesliga team to place a sponsor’s logo on its jersey,[23] although the team rejected a related proposal to rename itself Eintracht Jägermeister.[24] The sponsorship, very controversial at the time, paid the team 100,000 DM (€51,130) and introduced a new way of doing business in football. Other teams quickly followed suit. Jägermeister now displays its advertisements at several football stadiums in Germany.[25]

Jägermeister also had an involvement in European table tennis when it sponsored German club TTC Jägermeister Calw and was a personal sponsor of Dragutin Šurbek.

In the United States, Jägermeister became popular through promotion by Sidney Frank and through its association with heavy metal- and rockbands such as Metallica, Mötley Crüe, Pantera, Slayer, HIM, Crossfaith, Epica, The Bloodhound Gang, Psychostick, and Turbonegro.[26] Jägermeister is the tour sponsor of numerous bands of this genre.[27]

The Jägermeister Music Tour, which is owned by Sidney Frank Importing, is an event that is held each year in the spring and fall.[citation needed]

In 2013, a young man was left in a coma and eight others were hospitalized after organizers of a Jägermeister promotional event in Mexico poured liquid nitrogen into a swimming pool in an effort to produce a smoke-like effect. Upon contacting water, the liquid nitrogen had boiled into gaseous form and displaced oxygen above the pool's surface, causing inert gas asphyxiation for the people in and around the pool – some of whom slipped under the water after losing consciousness.[34][35]