Jérôme d'Ambrosio (born 27 December 1985) is a Belgian professional racing driver of Italian descent. He drove for Marussia Virgin Racing during the 2011 Formula One World Championship. As a result of the one-race ban given to Romain Grosjean for actions at the start of the 2012 Belgian Grand Prix, d'Ambrosio replaced the Frenchman for the 2012 Italian Grand Prix. He is currently competing in Formula E driving for Dragon Racing. D'Ambrosio achieved his first and only Formula E victory to date in 2015 at the Berlin ePrix as a result of Lucas Di Grassi's disqualification.

D'Ambrosio moved into single-seaters in 2003, winning the Belgian Formula Renault (1.6 litre) championship, driving for former Formula One driver and compatriot Thierry Boutsen's team. Also in 2003, d'Ambrosio drove in the German-based Formula König championship finishing fourth in the season standings. He also took part in a test for the Renault F1 Driver Development Programme, which he won, earning him a place on the programme for 2004, although he was not retained for further seasons. He moved into the French Formula Renault 2-litre series for 2004 where he finished fourth in the final standings and was top rookie. He also started seven races in the Eurocup. He switched to the Italian Formula Renault Championship in 2005, finishing fourth, also starting six Eurocup races. In 2006, he drove at the highest level in the Formula Renault hierarchy, the Formula Renault 3.5 Series, for Tech 1 Racing, but left the series after four rounds having not scored any points.

He switched to the Euroseries 3000, driving for Euronova Racing, taking three podium finishes and ending up fifth in the final standings despite missing the first half of the season. He also took part in a single race meeting of the FIA GT Championship, driving a Gillet Vertigo in the GT2 class.

For 2007, d'Ambrosio took part in the inaugural season of the International Formula Master series with the Cram Competition team. He won five races, scored 100 points and became the category's first champion. 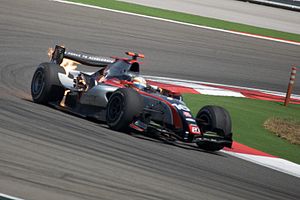 For 2008, d'Ambrosio competed in both the GP2 Series and the new GP2 Asia Series for the DAMS team, alongside Kamui Kobayashi. He finished eleventh in the GP2 drivers' championship, with a best finish of two second places. He continued with the team into the 2008–09 GP2 Asia Series season, and despite not taking a single victory, d'Ambrosio managed to finish runner-up to team-mate Kobayashi. He continued with DAMS into the 2009 season, and finished ninth despite failing to achieve a victory. He remained with the team for the 2010 season, as part of DAMS's co-operation with the Renault Formula One team.[1] He took his first series victory at Monaco, but was later rested for two races in favour of Romain Grosjean.[2] He took his first series pole position for his home round, but retired from the feature race whilst leading. Following a podium finish at Monza, he finished twelfth in the drivers' championship.

In January 2010, d'Ambrosio was announced as a reserve driver for Renault F1, rejoining the team's driver programme thanks to its newly formed links with the Gravity Sport Management company that looks after d'Ambrosio.[1]

It was announced on 16 September that d'Ambrosio would replace Lucas di Grassi at Virgin on four occasions during Friday practice: at the Singapore, Japanese, Korean and Brazilian Grands Prix. He broke the news to Belgian TV channel RTBF.[3] At his first Friday Practice in Singapore, he finished 21st, two-tenths behind teammate Timo Glock.

On 21 December 2010, Virgin Racing confirmed that d'Ambrosio would race for the team in 2011.[4] In his first 13 races for the team, d'Ambrosio finished 11 of them with his only retirements coming in Malaysia due to a problem with his car's electronics and in Italy due to gearbox problems. His best finishes have been two 14th places, in Australia and Canada. In his home race, the Belgian Grand Prix, he finished 17th, beating his team-mate Timo Glock.

In the Virgin garage, d'Ambrosio was affectionately known as 'Custard', with the word pasted on his cockpit when he began testing for the 2011 season at Valencia. Ambrosia is a well-known UK brand of custard and rice pudding.[5]

D'Ambrosio finished the season 24th in the Drivers' Championship, ahead of Glock (whose best finishes were a pair of 15th places), but was replaced by Charles Pic for the 2012 season.[6]

On 24 January 2012 it was announced that d'Ambrosio would act as reserve driver for Lotus F1 ahead of the 2012 season and be present at all of the season's races along with drivers Kimi Räikkönen and Romain Grosjean. He is also doing co-commentary work for Sky Sports F1 for F1 practice sessions, GP2 and GP3 races and for Belgian French-speaking channel RTBF for F1 races.

D'Ambrosio made his race début for Lotus at the 2012 Italian Grand Prix; he replaced Grosjean, who was banned for one race for causing a multiple collision at the previous round in Belgium.[7] He qualified in 16th place, and started in 15th place due to a 10-place grid drop penalty applied to Pastor Maldonado.[8] He finished in 13th place, on the lead lap, 76 seconds behind.[9]

For 2014, d'Ambrosio switched from single seaters to GTs, joining Bentley to race a Continental GT3 in the Blancpain Endurance Series alongside Duncan Tappy and Antoine Leclerc.[10]

In 2014–15, d'Ambrosio contested the inaugural season of the FIA Formula E Championship for the Dragon Racing team.

D'Ambrosio finished fourth in the drivers' championship standings, taking a victory at the Berlin ePrix after initial race winner Lucas di Grassi was disqualified for violating technical regulations. D'Ambrosio's late season form resulted in him taking three top two finishes in the final four races. D'Ambrosio was the only driver on the grid in 2014-15 to have not retired from a race having competed in every single racing lap in Formula E's inaugural season. D'Ambrosio achieved 113 points in 2014-15, 61 of which were collected in three of the last four races. Dragon Racing collected 2nd in the Teams' Championship having surpassed ABT in the final round with a double podium finish. D'Ambrosio out-raced his teammates, Oriol Servià and Loïc Duval in all but one race in 2014-15 season at the Buenos Aires ePrix where he finished in 14th position.

D'Ambrosio started the season well with 5th in Beijing but struggled in qualifying in the opening two around against his teammate only managing 10th and 8th place on the grid. In Punta del Este he achieved his first Formula E pole position alongside teammate Loïc Duval, resulting in Dragon Racing's first front row lock out. He ended the race in 3rd position, one place ahead of Duval in fourth collecting his fourth career podium finish.

* Season still in progress. † Driver did not finish the race, but was classified as he completed more than 90% of the race distance.