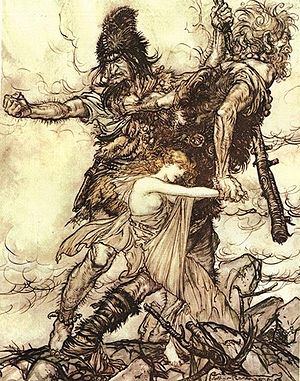 The jötnar (anglicized jotunn or jotun, plural jötnar; /ˈjoʊtən/, /ˈjoʊtʊn/, or /ˈjɔːtʊn/; Icelandic: [ˈjœːtʏn]; from Old Norse jǫtunn /ˈjɔtunː/; often glossed as giant or ettin) can be seen throughout Norse mythology. The Jötnar are a mythological race that live in Jötunheimr, one of the nine worlds of Norse cosmology. They were banished there by the Æsir who refuse them entry to their world, Asgard. The Jötnar frequently interact with the Æsir, as well as the Vanir. They are usually in opposition to, or in competition with them, but also interact with them in a non-hostile manner. Some Jötnar even intermarry with the Æsir and Vanir and many are named as parents or grandparents of Æsir such as Thor and Odin. This very complex relationship between these two comparable races develops most notably in the Prose Edda and the Poetic Edda, ultimately making it difficult to distinguish them from the more familiar Norse gods.

Jǫtunn (Proto-Germanic *etunaz) might have the same root as "eat" (Proto-Germanic *etan) and accordingly had the original meaning of "glutton" or "man-eater", probably due to their enormous diet because of their size.[1] Following the same logic, þurs might be derivative of "thirst" or "blood-thirst." Risi is probably akin to "rise," and so means "towering person" (akin to German Riese, Dutch reus, archaic Swedish rese, giant). The word "jotun" has evolved into jätte and jætte in modern Swedish and Danish, jotner in Norwegian (Singular: jotne), while in Faroese they are called jatnir [jaʰtnɪɹ]/[jaʰknɪɹ] (Singular: jøtun [jøːtʊn]).[citation needed] In modern Icelandic jötunn has kept its original meaning. In Old English, the cognate to jötunn is eoten, whence modern English ettin (also found as etene, yttin and ytene). [2]

The Elder Futhark rune ᚦ, called Thurs (from Proto-Germanic *Þurisaz), later evolved into the letter Þ. It is associated with dark magic, which could be why the jötnar have a negative connotation, or vice versa.[1] In Scandinavian folklore, the Norwegian name tusse for a kind of troll or nisse, derives from Old Norse Þurs. Old English also has the cognate þyrs of the same meaning.[citation needed]

The first living being formed in the primeval chaos known as Ginnungagap was a giant of monumental size, called Ymir. When the icy mists of Niflheimr met with the heat of Múspellsheimr Ymir was born out of the joining of these two extreme forces from either world in the great void. Contained within Snorri Sturluson's Gylfaginning, Ymir's creation is recounted:

Just as from Niflheim there arose coldness and all things grim, so what was facing close to Muspell was hot and bright, but Ginnungagap was as mild as a windless sky. And when the rime and the blowing of the warmth met so that it thawed and dripped, there was a quickening from these flowing drops due to the power of the source of the heat, and it became the form of a man, and he was given the name Ymir.[3]

When he slept a jötunn son and a jötunn daughter grew from his armpits, and his two feet procreated and gave birth to a son, a monster with six heads. These three beings gave rise to the race of hrímþursar (rime thurs, frost giants), who populated Niflheim. The gods instead claim their origin from a certain Búri. When the giant Ymir subsequently was slain by Odin, Vili and Vé (the grandsons of Búri), his blood (i.e. water) deluged Niflheim and killed all of the jötnar, apart from one known as Bergelmir and his spouse, who then repopulated their kind. It is mentioned in Vafþrúðnismál "From Ymir's flesh the earth was formed, and the rocks from out of his bones; the sky from the skull of the ice-cold giant, and the sea from his blood."[4]

Character of the jötnar 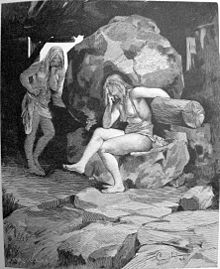 Some of the jötnar are attributed hideous appearances – claws, fangs, and deformed features, apart from a generally hideous size. Some of them may even have many heads, such as Þrívaldi who had nine of them, or an overall non-humanoid shape; so were Jörmungandr and Fenrir, two of the children of Loki.

Yet when jötnar are named and more closely described, they are often given the opposite characteristics. Many of the jötnar are described as beautiful, Skaði being described as the “bright bride of the gods".[5] Although some jötnar are said to have been of considerable size, many were of no difference in size than that of the Æsir or Vanir.[6] The Jötunn do appear to have some shared characteristics between a few of them, "according to well established skaldic precedents, any figure that lives on, in or among rocks may be assumed to be a giant".[7] This is most likely due to their association with the creation of the earth. It is the jötnar Mímir and Vafþrúðnir Odin seeks out to gain ancient knowledge about Fimbulvinter, the great winter that marks the start of the end of times, Ragnarök. In Vafþrúðnismál Odin was wary to visit the giant's hall, as he was described by Frigg as being the most powerful giant she knows.[4] This is a clear testament to the comparable levels of ability between this ancient race and the gods. Many Æsir claim ancestry with the giants: Odin’s parents are Borr, an Æsir, and Bestla, a giantess; Loki claims ancestry from Laufey, an Æsir, and Fárbauti, a jötunn. It is often referenced in skaldic texts that the giants married or formed relationships with many of the Æsir and Vanir. In Snorri Sturluson's Haustlöng, Njörðr is married to the giantess Skaði as part of the compensation provided to her by the Æsir for killing her father, Þjazi.[8] In Skírnismál (also referred to as För Skírnis) Gerðr becomes the consort of Freyr after he becomes enamored with her.

Frey, the son of Njörð, had seated himself on Hliðskjálf, and looked out across all the worlds. He saw into Giant's Domain and saw there a beautiful girl... From that he had great sickness of heart.[9]

Her relationship with Freyr is notable in the fact that it is not consensual. Freyr's page, Skírnir, first attempted to bribe Gerðr then subsequently had to threaten Gerðr with banishment and a life devoid of pleasure in order to convince her to lie with Freyr. This shows that the Jötunn were not always acting as the aggressor in Norse mythology, but sometimes quite the opposite. Odin gains the love of Gunnlod, and even Thor, the great slayer of their kind, produces a child with Járnsaxa; Magni. As such, they appear as minor gods themselves, which can also be said about the sea giant Ægir, far more connected to the gods than to the other jötnar.

As a whole, the Æsir-Jötnar relationship is a complex one, with a deep history embedded in murder. Odin with Vili and Vé killed Ymir, the primordial giant, and then killed the rest of the race, save Bergelmir, by spilling Ymir’s blood and flooding Niflheim. Then, there are many myths of hostilities over resources, women, and valuable objects: Odin steals the mead of poetry from Suttung and Gunnlöð; the Æsir trick a giant out of his prize; Útgarða-Loki tricks Thor, Þjálfi, and Loki into losing many contests. Throughout the mythology, the Æsir subordinate the Jötnar and steal their wealth, knowledge, and women, even when the Jötnar are given some of the most important roles in the world. 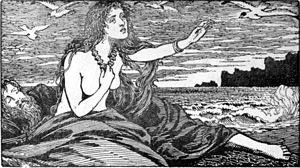 Many giants have greatly influenced the natural world; they could even equate with gods of nature.[6] Odin and his brothers used Ýmir’s body to make the physical world. Hræsvelgr, a jötunn in the form of an eagle, flaps his wings to create the wind. The giantess Jörð, the mother of Thor, is the mother of animal and plant life and has fertility powers. Thor sees Gjálp, a giantess, straddling a river and urinating, raising the water level. Ægir, like his consort Rán, is the sea personified in the shape of a giant, and jötnar connected to seas and oceans are interpreted in Icelandic as sjórisar (from O.N. sjór — "sea", "ocean"; lit. "ocean-risar", "sea-giants") or sækonungar (compd. of sær — "sea" + konungr — "king"; lit. "sea-kings", "rulers of the ocean"). Also, summer, winter, night, the sun, and the moon all claim Jötnar heritage. In folklore, people have attributed violent weather and even land formations to giants.[10] Stories tell that giants can move and create mountains, form lakes, move islands, and uproot trees. Half-finished buildings destroyed by harsh winds are attributed to giants blowing them over. They believed that smoke from a giant’s pipe causes mist and shaking, fighting, and sneezing cause earthquakes. Jötnar are constantly described as less than the Æsir, but their natural powers cannot be ignored.

Ragnarök and the fire jötnar

A certain class of jötnar are the fire jötnar (Múspellsmegir, "sons of Muspell", or eldjötnar), said to reside in Muspelheim, the world of heat and fire, ruled by the fire jötunn Surtr ("the black one"). The main role of the fire jötnar in Norse mythology is to wreak the final destruction of the world by setting fire to it at the end of Ragnarök, when the jötnar of Jotunheim and the forces of Hel shall launch an attack on the gods, and kill all but a few of them.