David Jonathan "J. D." Drew (born November 20, 1975) is a former American Major League Baseball right fielder. He is a left-handed hitter, and began his major league career in 1998 with the St. Louis Cardinals. He is the brother of two other major league players, Stephen and Tim.

Drew attended Florida State University, where he played under head coach Mike Martin. At Florida State, he was the winner of the 1997 Dick Howser Trophy and the 1997 Golden Spikes Award, was named the 1997 Collegiate Baseball Player of the Year, the 1997 Sporting News Player of the Year, and was a consensus All-American (1997). He also was named the 1997 ACC Player of the Year. He was a 1996 member of Team USA. Drew was First Team in 1996, Freshman All-American in 1995 and was named to the College World Series All Tournament Team in 1995. He was the first player in college baseball history to hit 30 home runs and steal 30 bases in the same season. He set a Florida State record by batting .455 in 1997 while becoming one of only three players in college baseball history to have 100 hits, 100 runs and 100 RBIs. During his college career, Drew broke 17 school and conference records.

1997: Drafted by the Philadelphia Phillies

The Philadelphia Phillies made Drew the second overall pick after pitcher Matt Anderson in the 1997 Major League Baseball Draft. Drew and his agent Scott Boras chose not to sign with the Phillies, insisting Drew would not sign for less than $10 million. The Phillies had no plan to pay an unproven player this amount of money, and despite Boras' warnings, drafted Drew nonetheless. They offered him $2.6 million.[1] Consequently, Drew ended up playing for the St. Paul Saints of the independent Northern League. Boras had Drew sign with the Northern League because of a loophole in the rules of the MLB Amateur Draft.[2]

After playing for St. Paul in the 1997 season, Drew was selected in the first round of the draft, fifth overall in 1998 by the St. Louis Cardinals. In June he signed a $7 million contract,[1] then hit .316 through 26 games with the Triple-A Memphis Redbirds. He was recalled by the Cardinals and made his debut on September 8, 1998 (coincidentally, the game in which teammate Mark McGwire broke Roger Maris' single-season home run record). His first at bat, in the 6th inning, ended in a strikeout, and he finished the night 0-for-2. He ended up going 15-for-36 (.417) during 1998, with five home runs.

On August 9, on what would have been Drew's first game in Philadelphia, he sat out citing a bruised right hand. He did not wear his own jersey that night. His jersey was worn by bullpen catcher, Jeff Murphy, as an attempt to confuse the Philadelphia fans. The attempt failed, and he was booed and heckled throughout batting practice. The only time he received cheers was when he booted three consecutive grounders in the outfield while his teammates were taking batting practice.[3] On August 10, 1999, in Drew's first game at Veterans Stadium in Philadelphia, he was booed loudly, and even had batteries thrown at him by two fans. The Phillie Phanatic got into the act, dropping two large trash bags marked with dollar signs in the outfield between innings.[4] Drew struggled to stay healthy, landing on the disabled list every season he played in St. Louis.

In his book Three Nights in August, Buzz Bissinger mentions former manager Tony La Russa's frustration with Drew's lack of passion. La Russa tells Bissinger that it seems Drew has decided to "settle for 75%" of his talent, in large part because of his enormous contract.[5]

On December 13, 2003, Drew was traded to the Atlanta Braves along with catcher Eli Marrero for starting pitcher Jason Marquis, relief pitcher Ray King, and rookie prospect Adam Wainwright.[6] There, he had the best season of his career while finally managing to stay healthy. In 2004, he displayed excellent power, patience, and defense hitting .305 with 31 home runs, 118 walks, and 93 RBI, finishing 6th in the MVP voting. 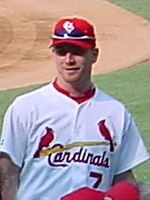 In December 2004, Drew signed a five-year, $55 million contract with the Los Angeles Dodgers,[7] which included an escape clause after the second year. Roughly halfway through the 2005 season, Drew's season was again cut short after being hit on the wrist by a pitch from Arizona Diamondbacks' pitcher Brad Halsey.

In 2006, Drew exercised his contract opt-out clause, forgoing $33 million over the next 3 years to become a free agent. The Dodgers' General Manager Ned Colletti said in a teleconference that he was "surprised how it came down. Everything we had heard, everything that had been written led us to believe the player loved being here."[8] This was especially a surprise since a few days before, Drew had told an LA Times columnist on how happy he was in LA and that he was looking forward to the upcoming 2007 season. Drew had a very good season, batting .284 with 20 home runs and 100 RBIs.

On January 26, 2007, Drew officially signed a five-year contract with the Red Sox worth $70 million. Drew's revised contract has a clause that allowed the Red Sox to opt out of Drew's five-year contract after three or four years if Drew has extensive injuries due to a previously existing problem in his right shoulder.

Drew was again part of a set of four consecutive home runs on April 22, 2007, in a game against the New York Yankees, this time joining with Manny Ramírez, Mike Lowell, and Jason Varitek. He is the only player to participate twice in a string of four straight home runs, and he was the second player to go deep in each instance. Drew finished the 2007 season with a .270 batting average, 11 home runs, and 64 RBI.[9] 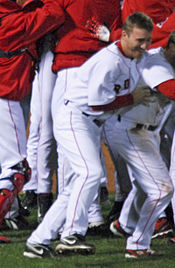 On October 20, 2007, Drew hit a grand slam in Game 6 of the 2007 ALCS with the Red Sox facing elimination. The home run, along with brother Stephen Drew's for the Arizona Diamondbacks, marks the third time that two brothers have both hit home runs in the same postseason.

In 2008, Drew hit the 2nd longest home run in Fenway Park history, at 500 feet, which was also the longest in 2008; he finished with a .280 average, with an OBP of .408 and a slugging percentage of .519.[10] At the end of June, Drew was named the AL Player of the Month after hitting .337 and hitting 12 home runs while taking over for David Ortiz's three-spot in the lineup while he was on the disabled list.[11] Drew was officially announced as an A.L. All-Star reserve on July 6. This was Drew's first All-Star game appearance. He hit a 2-run homer in his first at-bat as an All-Star and scored the winning run en route to winning the game's MVP award. In what was to become the longest All-Star Game time-wise in MLB history, the American League (and Drew's Red Sox) manager Terry Francona, having almost run out of pitchers, contemplated putting Drew, a former high school hurler, on the mound to close the game. "I'd have been ready," Drew said. "I've had an opportunity to throw a lot in the outfield. I don't know if I would have gotten anyone out, but I'd have thrown something up there."[12] Drew later visited the 15-day disabled list, spending from August 27 to September 8 on the DL with a strained lower back.

On October 3, in Game 2 of the 2008 American League Division Series against the Los Angeles Angels of Anaheim, Drew hit a go-ahead two-run home run. On October 16, in Game 5 of the American League Championship Series against the Tampa Bay Rays, Drew helped to bring the Red Sox back from a late-inning seven-run deficit with a two-run home run in the eighth inning and then delivered the walk-off hit in the ninth. The Game 5 comeback, sparked by Drew, is the second-biggest in postseason history and is the largest for a team on the brink of elimination. However, the Red Sox lost to the Rays in the seventh game.

Drew married his girlfriend Sheigh, on November 10, 2001, in Hahira, Georgia. Drew identifies as a Christian.[13]