Joseph "Lightning Joe" Lawton Collins (May 1, 1896 – September 12, 1987) was Army Chief of Staff during the Korean War. During World War II, he was an Army general,[1] serving in both the Pacific and European Theaters of Operations.

Collins was born in New Orleans, Louisiana, into a large Irish Catholic family. He graduated from the United States Military Academy in 1917; was commissioned a second lieutenant and assigned to the 22nd Infantry, April 1917; was promoted to first lieutenant, May 1917, and temporary captain, August 1917. He attended the Infantry School of Arms at Fort Sill and served with his regiment at various locations, 1917–1919. Collins was promoted to captain, June 1918, and to temporary major, September 1918; commanded the 3rd Battalion, 22nd Infantry, in France, 1919, and was assistant chief of staff, G-3, of American Forces in Germany, 1920–1921.

During this time Collins served in the Army of Occupation with the Philippine Scouts in Germany.[2]

Collins married Gladys Easterbrook, 1921; reverted to captain, 1920; was instructor in the department of chemistry at West Point, 1921–1925; graduated from the company officer course at the Infantry School, Fort Benning, 1926, and from the advanced course at the Field Artillery School, Fort Sill, 1927. He was an instructor in weapons and tactics at the Infantry School, 1927–1931; was promoted to major, August 1932; was executive officer of the 23rd Brigade, Manila, and assistant chief of staff, G-2, Philippine Division, 1933–1934. 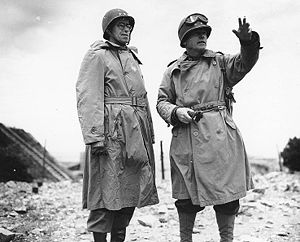 Collins was promoted to the temporary ranks of colonel, January 1941, brigadier general, February 1942, and major general, May 1942.

He was chief of staff of the Hawaiian Department, 1941–1942, and commanding general of the 25th Infantry Division—the "Tropic Lightning" Division—on Oahu and in operations against the Japanese on Guadalcanal, 1942–1943 and on New Georgia in from July to October 1943.

Transferred to Europe, he commanded VII Corps in the Normandy invasion and in Western European campaigns to the German surrender, 1944–1945. VII Corps is best known for the leading role it played in Operation Cobra; less well known is Collins' contribution to that plan.

One of the few generals to fight in both Europe and the Pacific, Collins contrasted the nature of the enemy in the two theaters:

The German was far more skilled than the Japanese. Most of the Japanese that we fought were not skilled men. Not skilled leaders. The German had a professional army.... The Japanese... didn't know how to handle combined arms - the artillery and the support of the infantry - to the same extent we did. They were gallant soldiers, though.... They fought very, very hard, but they were not nearly as skillful as the Germans. But the German didn't have the tenacity of the Japanese.[3] 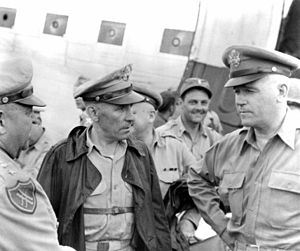 Collins with Walton Walker and John H. Church in Korea

Collins was chief of staff of the United States Army, August 16, 1949 – August 15, 1953; as such he was the Army’s senior officer throughout the Korean War. As a wartime chief of staff his primary responsibility was to ensure that adequately trained and equipped soldiers were sent to fight in Korea.

He directed the Army’s operation of the railroads, brought the first Special Forces group into the order of battle, and was closely associated with the development of the Army’s contribution to the newly established North Atlantic Treaty Organization.

General Collins died in Washington, D.C., on September 12, 1987. He is buried at Arlington National Cemetery.[4]