J. Marion Sims, born James Marion Sims (January 25, 1813 – November 13, 1883) was a physician and a pioneer in the field of surgery, considered by some as the father of modern gynecology.[1] His most significant work was to develop a surgical technique for the repair of vesicovaginal fistula, a severe complication of obstructed childbirth.

Sims' use of enslaved African-American women as experimental subjects is considered highly unethical by many modern historians and ethicists.[1][2] He is considered "a prime example of progress in the medical profession made at the expense of a vulnerable population."[1] Physician L.L. Wall has attempted to defend Sims on the basis of his conformity to accepted medical practices of the time, the therapeutic nature of his surgery, and the catastrophic nature for women of the condition he was trying to fix.[3]

J. Marion Sims (called Marion) was born in Lancasterville, South Carolina, the son of John and Mahala Mackey Sims. Sims's family spent the first twelve years of his life in the Heath Springs area of Lancaster County. He would later write entertainingly of his early school days, but recalled one occasion when he was saved from drowning by fourteen-year-old Arthur Ingram, who lived south of Hanging Rock Creek.

His father, John Sims, was elected sheriff of Lancaster County in 1825 and thereafter took up residence in Lancaster, where the boy, Marion, entered Franklin Academy.

After two years of study at the South Carolina College in Columbia, Sims worked with Dr. Churchill Jones in Lancaster, South Carolina, and took a three-month course at the Medical College of Charleston. He moved to Philadelphia, Pennsylvania and enrolled at the Jefferson Medical College, where he graduated in 1835. He returned to Lancaster to practice but, after the deaths of his first two patients, moved to Alabama.

He returned to Lancaster in 1836 to marry Theresa Jones, the daughter of Dr. Barlett Jones. He met her when he was studying at South Carolina College in Columbia. They moved to Montgomery, Alabama where in 1845 Sims established a private hospital for women.

Women with vesicovaginal fistulas, described as a "catastrophic complication of childbirth," [3] were, in the 19th century, social outcasts as no cure was available. The frequently occurring injuries left the women subject to leaking urine and related medical problems. In Montgomery over a period of 4 years, Sims experimented by surgery on 14 enslaved women with fistulas, most of whom he bought and kept on his property for this purpose. Some were operated on up to 30 times.[1]

He named three enslaved women in his records: Anarcha, Betsy, and Lucy. Each suffered from fistula, and all were subjected to his surgical experimentation.[2] From 1845 to 1849 he experimented on them, operating on Anarcha 30 times. She had "a particularly difficult combination vesicovaginal and rectovaginal fistula", which he struggled to repair.[3]

Although anesthesia had recently become available, Sims did not use any anesthetic during his procedures on Anarcha, Betsy, and Lucy.[2] According to Sim, it was not yet fully accepted into surgical practice.[3] However, ether as anesthesia was available as early as the beginning of the 1840s and Sims did not believe it was necessary for his procedures despite his own memoir stating "Lucy's agony was extreme...she was much prostrated and I thought she was going to die".[4] He did administer opium to the women after their surgery, which was accepted therapeutic practice of the day.[5]

After the extensive experiments and difficulties, Sims finally perfected his technique. He repaired the fistula successfully in Anarcha. His technique using silver-wire sutures led to successful repair of a fistula, and this was reported in 1852.[1] He then "repaired" several other enslaved women.[6] It was only after his success in early experiments on the enslaved women that Sims attempted the procedure on white women with fistulas; he used anesthesia for their surgeries. 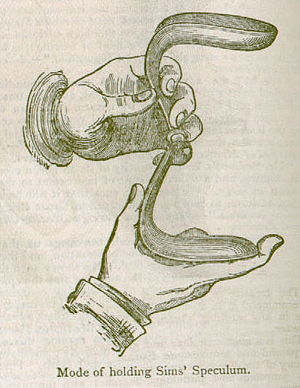 These experiments were the basis for modern vaginal surgery. Sims also devised instruments, including the Sims' speculum, to aid in examination and surgery. A rectal examination position, in which the patient is on the left side with the right knee flexed against the abdomen and the left knee slightly flexed, is also named after him.

Sims has continued to be cited for his groundbreaking work in medical textbooks but, since the late 20th century, historians and ethicists have questioned his practices. His experimental surgeries without anesthesia on enslaved African-American women who could not consent are considered by some to be symbolic of the violent oppression of blacks and vulnerable populations in the United States.[1]

Physician L.L. Wall attempts to argue that Sims was operating for therapeutic purposes, with the consent of patients as can be determined, and within acceptable medical practices of his time. He believes Sims cannot be judged only in relation to today's standards. He notes that

"modern critics have discounted the enormous suffering experienced by fistula victims, have ignored the controversies that surrounded the introduction of anaesthesia into surgical practice in the middle of the 19th century, and have consistently misrepresented the historical record in their attacks on Sims."[3]

In order to test a hypothesis about the causes of trismus in infants, Sims performed experiments in which he used a shoemaker's awl to manipulate the skull bones of babies born to enslaved women.[7][8] 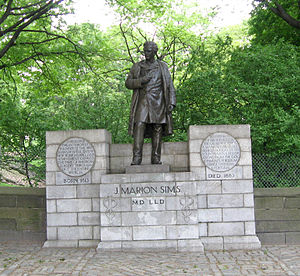 Sims moved to New York in 1853 because of his health and determined to focus on diseases of women. In 1855 he founded the Woman's Hospital, the first hospital for women in America. Here he performed operations on indigent women, often in a theatre so that medical students and other doctors could view it, as was fundamental to medical education in those years. He operated on one patient, Mary Smith, 30 times between 1856 and 1859 at this hospital. This later became part of the St. Luke's-Roosevelt Hospital Center.

In 1862, during the American Civil War, Sims moved to Europe, where he worked primarily in London and Paris. From 1863 to 1866, he served as surgeon to Empress Eugénie. Honors and medals were heaped upon him for his successful operations in many countries. The necessity of many of these surgeries have since been called into question. Several of his patients had surgery for what were considered gynecological issues: such as clitoridectomies, believed to control hysteria or 'improper' behavior related to sexuality. These were done at the requests of their husbands/fathers, who were permitted under the law to commit the women to surgery involuntarily.[6]

Under the patronage of Napoleon III, Sims organized the American-Anglo Ambulance Corps, which treated wounded soldiers from both sides at the battle of Sedan.[6]

In 1871, Sims returned to New York. After quarreling with the board of the Woman's Hospital over the admission of cancer patients (which he favored and which the board opposed because of the mistaken belief that cancer was contagious) he became instrumental in establishing America's first cancer institute, New York Cancer Hospital.

From 1876–77, Sims served as president of the American Medical Association. He was halfway through writing his autobiography and planning a return visit to Europe when he died of a heart attack on November 13, 1883 in New York. He is buried at Green-Wood Cemetery in Brooklyn, New York.[9]