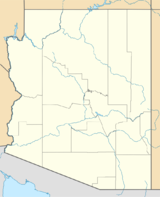 The JTBC Founders Cup is a women's professional golf tournament on the LPGA Tour in Phoenix, Arizona. It debuted in 2011 at the Wildfire Golf Club at JW Marriott Phoenix Desert Ridge Resort and Spa. The tournament is designed as a tribute to the founders of the LPGA.

The current title sponsor of the tournament is JTBC, a South Korean nationwide general cable TV network and broadcasting company.[2]

In 2011, using a unique format conducted for the first time in LPGA history, the players did not receive a cash payout. Instead, the tournament donated half of the $1 million tournament purse to charity and the other half to individual charities chosen by the top-10 finishers. All players who made the cut received a portion of the purse in the form of virtual earnings that were attributed to them for purposes of the LPGA official money list.[3]

In 2012, the tournament expanded from three days to four days, and an actual cash purse was instituted.