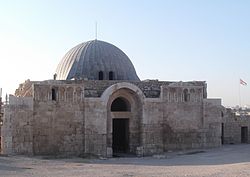 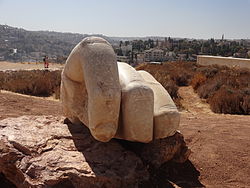 Lua error in Module:Coordinates at line 668: callParserFunction: function "#coordinates" was not found. The Amman Citadel is a historical site at the center of downtown Amman, Jordan. Known in Arabic as Jabal al-Qal'a, (جبل القلعة), the L-shaped hill is one of the seven jabals that originally made up Amman. Evidence of occupation since the pottery Neolithic period[1] has been found. It was inhabited by different peoples and cultures until the time of the Umayyads, after which came a period of decline and for much of the time until 1878 the former city became an abandoned pile of ruins only sporadically used by Bedouin and seasonal farmers.[2][3][4] Despite this gap, the Citadel of Amman is considered to be among the world's oldest continuously inhabited places.[5]

The Citadel is considered an important site because it has had a long history of occupation by many great civilizations.[6] Most of the buildings still visible at the site are from the Roman, Byzantine, and Umayyad periods.[7] The major buildings at the site are the Temple of Hercules, a Byzantine church, and the Umayyad Palace.

Though the fortification walls enclose the heart of the site, the ancient periods of occupation covered large areas. Historic structures, tombs, arches, walls and stairs have no modern borders, and therefore there is considerable archaeological potential at this site, as well as in surrounding lands, and throughout Amman.

Archaeologists have been working at the site since the 1920s, including Italian, British, French, Spanish, and Jordanian projects,[8] but a great part of the Citadel remains unexcavated.

Excavations have uncovered signs of human occupation from as far back as the Middle Bronze Age (1650-1550 BC) in the form of a tomb that held pottery and scarab seals.[9] During the Iron Age, the Citadel was called Rabbath-Ammon. The Amman Citadel Inscription comes from this period, an example of early Phoenician writing.[10] It came to be occupied by the Assyrians, Babylonians, and Persians. When it was conquered by the Greeks in 331 BC, the city was renamed Philadelphia.[11] From the Hellenistic Period, there were not many architectural changes, but pottery provides evidence for their occupation.[12] The site became Roman around 30 BC, and finally came under Muslim rule in AD 661.[13] The Citadel declined in importance under Ayyubid rule in the 13th century, but a watchtower was added to the site during this period.[14]

The Temple of Hercules located at the site dates to the Roman occupation of the Citadel in the 2nd century AD.[15]

During the Umayyad period (AD 661-750), a palace structure, known in Arabic as al-Qasr, (القصر) was built at the Citadel. The Umayyad Palace was probably used as an administrative building or the residence of an Umayyad official. The palace draws on Byzantine style. For example, the entrance hall is shaped in a Greek cross plan. The palace may have been built on top of an existing Byzantine structure in this shape.[16] There is a huge water reservoir dug into the ground adjacent to the palace, along with a Byzantine church on the other side.

Starting in 1995-6, the Ministry of Tourism and Antiquities of Jordan in partnership with USAID began a project to conserve and restore this site to benefit tourists and the local community.[17] The Amman Citadel is also the site of Jordan Archaeological Museum, which is home to a collection of artifacts from the Citadel and other Jordanian historic sites.