From Infogalactic: the planetary knowledge core
Jump to: navigation, search
For other uses, see Jack-o'-lantern (disambiguation). 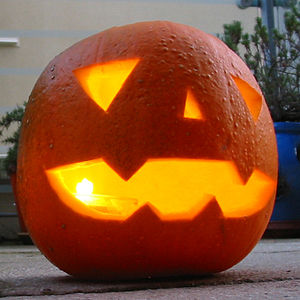 A traditional jack-o'-lantern, made from a pumpkin, lit from within by a candle. 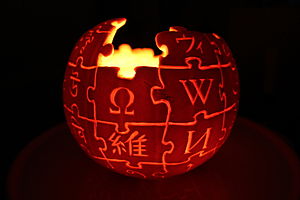 A jack-o'-lantern in the shape of the Wikipedia logo.

A jack-o'-lantern (or jack o'lantern) is a carved pumpkin or turnip lantern, associated with the holiday of Halloween and named after the phenomenon of a strange light flickering over peat bogs, called will-o'-the-wisp or jack-o'-lantern. In a jack-o'-lantern, the top of the pumpkin or turnip is cut off to form a lid, the inside flesh is scooped out, and an image — usually a monstrous or comical face - is carved out of the rind to expose the hollow interior. To create the lantern effect, a light source is placed within before the lid is closed. The light source is traditionally a flame such as a candle or tea light, but artificial jack-'o-lanterns with electric lights are also marketed. It is common to see jack-o'-lanterns on doorsteps and otherwise used as decorations prior to and on Halloween. 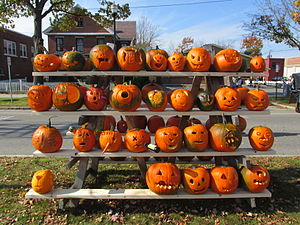 An assortment of carved pumpkins.

The term jack-o'-lantern was originally used to describe the visual phenomenon ignis fatuus (lit., "foolish fire") known as a will-o'-the-wisp in English folklore. Used especially in East England, its earliest known use dates to the 1660s.[1] The term "will-o'-the-wisp" uses "wisp" (a bundle of sticks or paper sometimes used as a torch) and the proper name "Will": thus, "Will-of-the-torch." The term jack-o'-lantern is of the same construction: "Jack of [the] lantern." 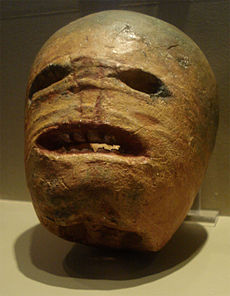 A traditional Irish Jack-o'-Lantern in the Museum of Country Life, Ireland. 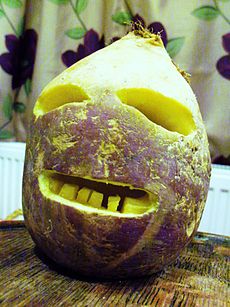 Modern carving of a Cornish Jack-o'-Lantern made from a turnip.

The carving of vegetables has been a common practice in many parts of the world, and gourds were the earliest plant species domesticated by humans c. 10,000 years ago, primarily for their carving potential.[2] For example, gourds were used to carve lanterns by the Maori over 700 years ago;[3] the Māori word for a gourd also describes a lampshade.[4]

It is believed that the custom of making jack-o'-lanterns at Halloween began in Ireland.[5][6][7] In the 19th century, "turnips or mangel wurzels, hollowed out to act as lanterns and often carved with grotesque faces," were used at Halloween in parts of Ireland and the Scottish Highlands.[8] In these Celtic-speaking regions, Halloween was also the festival of Samhain and was seen as a time when supernatural beings (the Aos Sí), and the souls of the dead, roamed the earth. The belief that the souls of the dead roamed the earth at Halloween was also found in other parts of Europe. Jack-o'-lanterns were also made at Halloween in Somerset (see Punkie Night) during the 19th century.[8]

By those who made them, the lanterns were variously said to represent the spirits or supernatural beings,[8] or were used to ward off evil spirits.[9] For example, sometimes they were used by Halloween guisers to frighten people,[9][10][11] and sometimes they were set on windowsills to keep harmful spirits out of one's home.[10] It has also been suggested that the jack-o'-lanterns originally represented Christian souls in purgatory, as Halloween is the eve of All Saints' Day (1 November)/All Souls' Day (2 November).[12]

At Halloween in 1835, the Dublin Penny Journal carried a lengthy discourse on the legend of "Jack-o'-the-Lantern".[13] In 1837, the Limerick Chronicle refers to a local pub holding a carved gourd competition and presenting a prize to "the best crown of Jack McLantern". The term "McLantern" also appears in an 1841 publication of the same paper.[14]

There is also evidence that turnips were used to carve what was called a "Hoberdy's Lantern" in Worcestershire, England at the end of the 18th century. The folklorist Jabez Allies recalls:

Adaptations of Washington Irving's short story "The Legend of Sleepy Hollow" (1820) often depict the Headless Horseman with a pumpkin or jack-o'-lantern in place of his severed head. (In the original story, a shattered pumpkin is discovered next to Ichabod Crane's abandoned hat on the morning after Crane's supposed encounter with the Horseman.)

The application of the term to carved pumpkins in American English is first attested in 1834.[16] The carved pumpkin lantern's association with Halloween is recorded in the 1 November 1866 edition of the Daily News (Kingston, Ontario):

In the United States, the carved pumpkin was first associated with the harvest season in general, long before it became an emblem of Halloween.[21] In 1900, an article on Thanksgiving entertaining recommended a lit jack-o'-lantern as part of the festivities.[21][22] 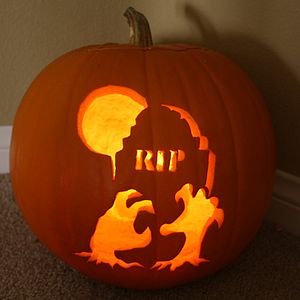 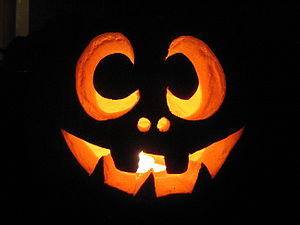 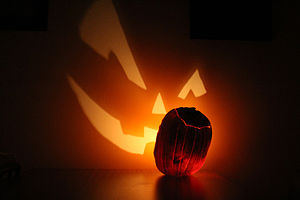 Pumpkin projected onto the wall.

The story of the jack-o'-lantern comes in many variants and is similar to the story of Will-o'-the-wisp[23] retold in different forms across Western Europe,[24] with variations being present in the folklore of Scotland, England, Wales, Germany, Ireland, Italy, Norway, Spain and Sweden.[25] An old Irish folk tale from the mid-19th Century tells of Stingy Jack, a lazy yet shrewd blacksmith who uses a cross to trap Satan. One story says that Jack tricked Satan into climbing an apple tree, and once he was up there Jack quickly placed crosses around the trunk or carved a cross into the bark, so that Satan couldn't get down.[26]

Another version[citation needed] of the story says that Jack was getting chased by some villagers from whom he had stolen, when he met Satan, who claimed it was time for him to die. However, the thief stalled his death by tempting Satan with a chance to bedevil the church-going villagers chasing him. Jack told Satan to turn into a coin with which he would pay for the stolen goods (Satan could take on any shape he wanted); later, when the coin (Satan) disappeared, the Christian villagers would fight over who had stolen it. The Devil agreed to this plan. He turned himself into a silver coin and jumped into Jack's wallet, only to find himself next to a cross Jack had also picked up in the village. Jack had closed the wallet tight, and the cross stripped the Devil of his powers; and so he was trapped.

In both folktales, Jack only lets Satan go when he agrees never to take his soul. After a while the thief died, as all living things do. Of course, his life had been too sinful for Jack to go to heaven; however, Satan had promised not to take his soul, and so he was barred from hell as well. Jack now had nowhere to go. He asked how he would see where to go, as he had no light, and Satan mockingly tossed him an ember from the flames of Hades, that would never burn out. Jack carved out one of his turnips (which were his favorite food), put the ember inside it, and began endlessly wandering the Earth for a resting place. He became known as "Jack of the Lantern", or jack-o'-lantern.

Cornish folklorist Dr. Thomas Quiller Couch (d. 1884) recorded the use of the term in a rhyme used in Polperro, Cornwall, in conjunction with Joan the Wad, the Cornish version of Will-o'-the-wisp. The people of Polperro regarded them both as pixies. The rhyme goes:[27]

Jack-o-lanterns were also a way of protecting one's home against the undead. Superstitious people[where?] used them specifically to ward away vampires. They thought this because it was said that the jack-o-lantern's light was a way of identifying vampires who, once their identity was known, would give up their hunt for you.[citation needed]

In addition to the folklore and literature noted above, jack-'-lanterns have been the subject of numerous media works over the years. 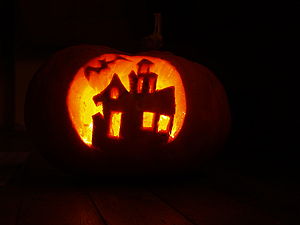 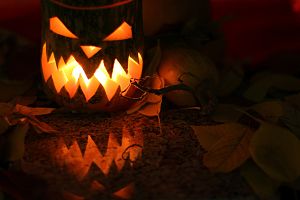 Sections of the pumpkin or turnip are cut out to make holes, often depicting a face, which may be either cheerful, scary, or comical. More complex carvings (or paintings on the gourds) are becoming more common such as: figures, logos, and symbols. A variety of tools can be used to carve and hollow out the gourd, ranging from simple knives and spoons to specialized instruments, typically sold in holiday sections of North American grocery stores. Printed stencils can be used as a guide for increasingly complex designs. After carving, a light source (such as a flame candle, electric candle, or tea light) is placed inside the gourd, and the top is put back into place. The light is normally inserted to illuminate the design from the inside and add an extra measure of spookiness. Sometimes a chimney is carved, too. It is possible to create surprisingly artistic designs, either simple or intricate in nature.

Picking out and carving pumpkins for Halloween. 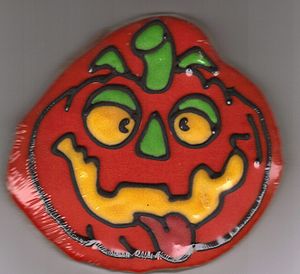 A sugar cookie decorated with frosting in the shape of a jack-o'-lantern.

Most jack-o'-lanterns carved and lit in one place

For a long time, Keene, New Hampshire held the world record for most jack-o'-lanterns carved and lit in one place. The Life is good company teamed up with Camp Sunshine, a camp for children with life-threatening illnesses and their families, to break the record; a record was set on October 21, 2006, when 30,128 jack-o'-lanterns were simultaneously lit on Boston Common.[28] Highwood, Illinois tried to set the record on October 31, 2011 with an unofficial count of 30,919 but did not follow the Guinness regulations, so the achievement did not count.[29]

On October 19, 2013, Keene, New Hampshire broke the Boston record and reclaimed the world record for most lit jack-o'-lanterns on display (30,581). Keene has now broken the record eight times since the original attempt.[30]

On October 31, 2005, Scott Cully carved the world's largest jack-o'-lantern from the world's-largest pumpkin (at the time), in Northern Cambria, Pennsylvania. The pumpkin was grown by Larry Checkon and weighed 1,469 lb (666.33 kg) on October 1, 2005 at the Pennsylvania Giant Pumpkin Growers Association Weigh-off.[31]