John William "Jack" Casady (born April 13, 1944) is an American musician considered one of the foremost bass guitarists of the rock music era and best known as a member of Jefferson Airplane and Hot Tuna. First playing as a lead guitarist with the Washington D.C. area rhythm and blues band "The Triumphs", he switched to bass during his high school years and while still underage (and with a forged I.D.), played the Washington D.C club scene, backing artists such as Little Anthony and the Imperials and Ray Charles. He became the bass player for Jefferson Airplane when lead guitarist Jorma Kaukonen, a high school friend and former Triumphs rhythm guitarist, invited him to join in late September 1965. Jefferson Airplane became the first successful exponent of the San Francisco Sound. Their singles, including "Somebody to Love" and "White Rabbit," had a more polished style and successfully charted in 1967 and 1968. Casady, along with the other members of Jefferson Airplane, was inducted into the Rock and Roll Hall of Fame in 1996.

Casady was born in Washington D.C., the son of Mary Virginia (née Quimby) and William Robert Casady.[1] His father was of half Irish Protestant and half Polish Jewish ancestry.[2] His mother was a relative of aviator Harriet Quimby; some of her family had been in the U.S. since the 1600s.[3]

Casady replaced original Jefferson Airplane bassist Bob Harvey in October 1965. Casady stepped beyond the conventional rhythmic and chord-supporting role of rock & roll, in order to explore other possible melodic ideas offered by the rhythm and chord progressions. His impact is immediately evident on Airplane debut album Jefferson Airplane Takes Off (1966) on tracks such as "Let Me In" and "Run Around." The "Takes Off" LP quotes Marty Balin as saying "He carries it. He's been with James Brown and other groups and he knows." The live Airplane album Bless Its Pointed Little Head, recorded in 1968, demonstrates Casady's unique walking line style to the fullest, as his Guild Starfire bass signal was delivered through a Versatone amplifier which gave his instrument a distinctive growling sound when played in the higher register. The Fred Neil track "The Other Side of This Life" remains the quintessential example of his style. On later Airplane albums, such as Bark, Long John Silver and the live Thirty Seconds Over Winterland, Casady switched over to a $4,000 custom-made Alembic bass (#001, the first made by the company) dubbed "Mission Control." The extraordinarily grand sound Casady produced during his 1968-71 heyday—nowhere better heard than in his multi-tracked playing on "Sunrise," a song from Paul Kantner's 1970 solo album Blows Against the Empire—inspired fans to assign him the affectionate nickname of "God."

Other noteworthy Casady performances on Jefferson Airplane recordings include the seminal Top 10 hit "White Rabbit" (on the album Surrealistic Pillow, 1967), "Rejoyce" and "Watch Her Ride" (After Bathing at Baxter's, 1967), "Crown of Creation", "If You Feel" and "The House at Pooneil Corners" (Crown of Creation, 1968), and "Crazy Miranda" and "War Movie" (Bark, 1971). Several of these tracks are remarkable for their groundbreaking infusions of jazz and raga bass lines into the rock format. For years in live performance with the Airplane, Casady's showcase was the Paul Kantner composition "The Ballad of You and Me and Pooneil," which gave the bassist the opportunity to improvise an open-ended solo that was different every night and often astonishing. The Fly Jefferson Airplane DVD includes one such performance videotaped at The Family Dog, where Casady pulls off a ragingly inventive solo that visibly impresses fellow band member Grace Slick. He was likewise adept at complementing the musicianship of his fellow players; the live version of "Volunteers" on the Woodstock album is a notable example of cooperating bass and keyboard rhythm with session pianist Nicky Hopkins.

Casady's appetite for playing led him to do extensive moonlighting during his Airplane tenure. Not only did he perform live on stage with Jimi Hendrix during 1968, he also played bass on the Jimi Hendrix song "Voodoo Chile", from the Electric Ladyland album released in the same year (some copies of the album misspell his name as Cassidy). He also occasionally played with other key San Francisco bands Grateful Dead, Country Joe and the Fish and James and the Good Brothers. Furthermore, he was a member of two short-lived splinter groups, Mickey and the Heartbeats (with Jerry Garcia and Mickey Hart) and Jack Casady and the Degenerates, featuring friend from teen years Danny Gatton, as well as Jorma. Neither of these groups ever recorded, though live tapes are in circulation. Later, Casady was to appear on David Crosby's "If I Could Only Remember my Name" (1971), Roky Erickson's album "Don't Slander Me" (1982) and Warren Zevon's "Transverse City" (1989). He also produced Jorma Kaukonen's first solo album, the critically acclaimed "Quah", in 1975. 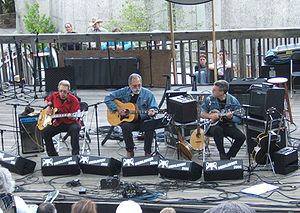 Casady and Kaukonen formed Hot Tuna in 1969, and they still perform to the present day. The group has morphed over the years from an acoustic blues unit to an electric boogie band to a rampaging metal act and back again. Casady is equally comfortable accompanying an acoustic Kaukonen ("Mann's Fate", 1970) or electric jamming ("John's Other", 1971). Casady's solo on "Candy Man" (Hot Tuna's First Pull Up, Then Pull Down, 1971) also shows his ability at carrying the melody rather than just playing rhythmic scales, a key characteristic of his bass solo work. Some exquisitely intricate playing is evident on the 1972 album Burgers, particularly the sparkling instrumental track "Water Song," which Casady has described as featuring "lead bass." Another Burgers track, " Sunny Day Strut", has Casady's bass dueling with Kaukonen's lead guitar. When Tuna became a power trio in the mid 70's, Casady's Guild Flying V custom bass became his trademark. Later works, especially Live in Japan (1997), still testify to his creativity as evidenced by the continually evolving bass solos on "Candy Man", "Good Shepherd" and "99 Year Blues".

SVT and The Yanks

In the late 1970s, Casady and Kaukonen found that they needed some creative time apart and Hot Tuna disbanded for several years. During this time, Casady helped found a modern rock band, SVT, with Brian Marnell, a promising songwriter and frontman, keyboardist Nick Buck, and drummer Bill Gibson, later replaced by Paul Zahl. Again, Casady's versatility was demonstrated as this band played in a convincing New Wave style, totally removed from Hot Tuna and Jefferson Airplane. During his SVT tenure, Casady actually taped his fingers together to force himself to simplify his highly articulated playing style. He and Zahl formed an exemplary rhythm section, as evidenced on the LP No Regrets (1981). After Marnell's death from a drug overdose Casady and Zahl continued the basic SVT sound with guitarist Jack Johnson and singer/songwriter/guitarist Owen Masterson in a band called The Yanks. Also during the 1980s, Casady joined former Airplane members Paul Kantner and Marty Balin in the KBC Band.

File:JackCasady1996.jpg
Casady in concert with Jefferson Starship in 1996.

Not a singer and never a prolific songwriter, it was not until June 2003 that Casady released his first solo album, Dream Factor, produced by Greg Hampton and Casady. Like other Airplane-related solo works it featured substantial support from other players such as Warren Haynes, Doyle Bramhall II, Jorma Kaukonen, Fee Waybill, Ivan Neville, the group Box Set, and many other musician friends.

Casady helped design, in conjunction with Epiphone, the "Jack Casady Signature Bass", a 34-inch scale hollow-body electric bass with single low-impedance humbucker pickup and a floating bridge. The instrument is based on Casady's mid-70s Gibson Les Paul Signature bass which he bought in the 1980s.

Casady is widely known for the commanding tonal quality of his playing, something that he acknowledges is deliberate. He has remarked that tone is the most essential quality for an electric bassist, stating "Tone is your signature as to who you are... The music builds around the tone. It isn’t just a series of notes or the articulation or the technique. The signature sound of a great musician is his tone and that sets him apart from others."[6]