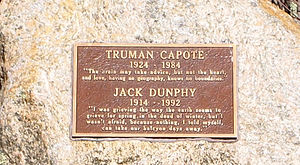 Dunphy was born in Atlantic City, New Jersey,[2] and was raised in a working-class neighborhood of Philadelphia, Pennsylvania. His sister was Gloria Dunphy. He trained in ballet under Catherine Littlefield, danced at the 1939 New York World's Fair, and toured with the George Balanchine company in South America in 1941.[2]

He married another Philadelphia dancer, Joan McCracken. They later appeared in the original Broadway production of Oklahoma! in 1943, in which McCracken played Sylvie and Dunphy danced as one of the cowboys. Dunphy also danced in The Prodigal Son, a ballet performed on Broadway in conjunction with The Pirates of Penzance in 1942.

Dunphy enlisted in the U.S. Army in January 1944 during World War II. During his service, he published his first work, "The Life of a Carrot," in Short Story magazine.

When he met Capote in 1948, Dunphy had written a well-received novel, John Fury, and was just getting over a painful divorce from McCracken.[3] In 1950 the two writers settled in Taormina, Sicily, in a house where the author D. H. Lawrence had once lived. Ten years older than Capote, Dunphy was in many ways Capote’s opposite, as solitary as Capote was exuberantly social. Though they drifted more and more apart in the later years, the couple stayed together until Capote's death.

When Capote died in 1984, his will named Dunphy as the chief beneficiary. Eight years later, Dunphy died of cancer in New York, at age 77. Dunphy and Capote had separate houses in Sagaponack, New York. Following their deaths some of the money from their estates was donated to the Nature Conservancy which used it to acquire nearby Crooked Pond on the Long Island Greenbelt between Sag Harbor, New York and Bridgehampton, New York and their ashes were scattered by the pond where a marker commemorates them. Joanna Carson, the third wife of Johnny Carson, has maintained that she also has some of Capote's ashes (a claim Dunphy denied) which she had kept at her Bel Air, Los Angeles home in the house where Capote died. After the ashes in California were stolen and returned, she bought a crypt for Capote's ashes at Westwood Village Memorial Park Cemetery in Brentwood, California; although it is unclear if the ashes were ever deposited there.[4][5][6]

Dunphy was portrayed in the film Capote (2005) by Bruce Greenwood and in the film Infamous (2006) by John Benjamin Hickey.

John Fury (Harper and Brothers, 1946), is the story of an Irish working-class man who moves from a happy marriage to an unpleasant one in a life of poverty, hard work, and frustration, where his only reprisal is anger. According to the website of Ayer Company Publishers, a reprint publisher of rare and hard to find titles, Mary McGrory praised the book in The New York Times at the time of publication: "It adds up to a remarkable first novel, warm and strong, its unflinching realism saved from brutality by the author's compassion and restraint... What Betty Smith did tenderly for Brooklyn, James T. Farrell harshly for Chicago and, most recently, Edward McSorley in his moving Our Own Kind for Providence, Dunphy does for Philadelphia."[7] Calmann-Lévy published a French translation in 1949, which is available at the Library of Congress. Arno Press reprinted the English version in 1976.

Other Dunphy novels are Friends and Vague Lovers (Farrar, Straus and Young, 1952), Nightmovers (William Morrow, 1967), An Honest Woman (Random House, 1971), First Wine (Louisiana State University Press, 1982) and its sequel, The Murderous McLaughlins, (McGraw-Hill, 1988). In this book, set again in Philadelphia, c. 1917, the same narrator, at age eight, tries to get his errant father Jim to return home to his family.

Dunphy also wrote Dear Genius: A Memoir of My Life with Truman Capote, published by McGraw-Hill in 1987. According to the review at Amazon.com, the book is actually a novel, with the subtitle provided by the publisher; Dunphy had subtitled the manuscript more accurately A Tribute to Truman Capote.[8]

Performance dates can be found on the webpage for the Lortel Foundation's Internet Off-Broadway Database.[9] The last three plays are available as photocopied manuscripts from Dramatists Play Service.[10]