From Infogalactic: the planetary knowledge core
(Redirected from Jack and Jill (song))
Jump to: navigation, search
For other uses, see Jack and Jill. 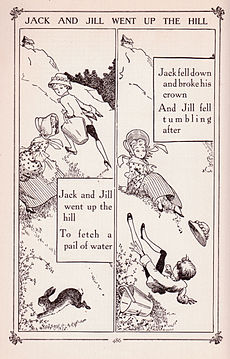 Jack and Jill from The Book of Knowledge, The Children's Encyclopedia (1912) 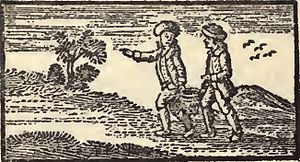 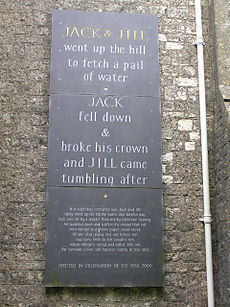 "Jack and Jill" (sometimes "Jack and Gill", particularly in earlier versions) is a traditional English nursery rhyme. The Roud Folk Song Index classifies this tune and its variations as number 10266. The rhyme dates back at least to the 18th century and exists with different numbers of verses each with a number of variations. Several theories have been advanced to explain its origins and to suggest meanings for the lyrics.

The first and most commonly repeated verse is:

Jack and Jill went up the hill
To fetch a pail of water.
Jack fell down and broke his crown,
And Jill came tumbling after.[1]

Many verses have been added to the rhyme, including a version with a total of 15 stanzas in a chapbook of the 19th century. The second verse, probably added as part of these extensions[1] has become a standard part of the nursery rhyme.[2] Early versions took the form:

Up Jack got, and home did trot,
As fast as he could caper;
To old Dame Dob, who patched his nob
With vinegar and brown paper.[1]

By the early 20th century this had been modified in some collections, such as L. E. Walter's, Mother Goose's Nursery Rhymes (London, 1919) to:

Up Jack got and home did trot,
As fast as he could caper;
And went to bed and bound his head
With vinegar and brown paper.[3]

A third verse, sometimes added to the rhyme, was first recorded in a 19th-century chapbook and took the form:

Then Jill came in, and she did grin,
To see Jack's paper plaster;
Her mother whipt her, across her knee,
For laughing at Jack's disaster.[1]

Twentieth-century versions of this verse include:

When Jill came in how she did grin
To see Jack's paper plaster;
Mother vexed did whip her next
For causing Jack's disaster.[3]

The rhyme is made up of quatrains, with a rhyming scheme of abcb (with occasional internal rhymes), using falling rhymes (where the rhyming sound is on a relatively unstressed syllable: de-emphasising the rhyme) and a trochaic rhythm (with the stress falling on the first of a pair of syllables), known as a ballad form, which is common in nursery rhymes.[4] The melody commonly associated with the rhyme was first recorded by the composer and nursery rhyme collector James William Elliott in his National Nursery Rhymes and Nursery Songs (1870).[5] The Roud Folk Song Index, which catalogues folk songs and their variations by number, classifies the song as 10266.[6]

The rhyme has traditionally been seen as a nonsense verse, particularly as the couple go up a hill to find water, which is often thought to be found at the bottom of hills.[7] Vinegar and brown paper were a home cure used as a method to draw out bruises on the body.[8] The phrase "Jack and Jill", indicating a boy and a girl, was in use in England as early as the 16th century. A comedy was performed at the Elizabethan court in 1567-8 with the title Jack and Jill and the phrase was used twice by Shakespeare: in A Midsummer Night's Dream, which contains the line: "Jack shall have Jill; Nought shall go ill" (III:ii:460-2) and in Love's Labour's Lost, which has the lines: "Our wooing doth not end like an old play; Jack hath not Jill" (V:ii:874–5), suggesting that it was a phrase that indicated a romantically attached couple, as in the proverb "A good Jack makes a good Jill".[1]

Jack is the most common name used in English language nursery rhymes and by the 18th century represented an archetypal Everyman hero,[9] while by the end of the Middle Ages Jill or Gill had come to mean a young girl or a sweetheart.[10] However, the woodcut that accompanied the first recorded version of the rhyme showed two boys (not a boy and a girl), and used the spelling Gill not Jill.[1] This earliest printed version comes from a reprint of John Newbery's Mother Goose's Melody, thought to have been first published in London around 1765.[11] The rhyming of "water" with "after", was taken by Iona and Peter Opie to suggest that the first verse may date from the first half of the 17th century.[1] 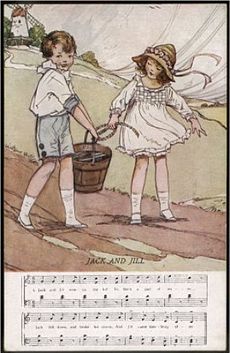 A postcard illustration of the rhyme by Dorothy M. Wheeler, c. 1920

While the true origins of the rhyme are unknown there are several theories. As is common with nursery rhyme exegesis, complicated metaphors are often said to exist within the lyrics of Jack and Jill. Most explanations post-date the first publication of the rhyme and have no corroborating evidence.[1] These include the suggestion by S. Baring-Gould in the 19th century that the events were a version of the story told in the 13th-century Prose Edda Gylfaginning written by Icelandic historian Snorri Sturluson, who stated that in Norse mythology, Hjúki and Bil, brother and sister (respectively), were taken up from the earth by the moon (personified as the god Máni) as they were fetching water from the well called Byrgir, bearing on their shoulders the cask called Saegr and the pole called Simul.[1] Around 1835 John Bellenden Ker suggested that Jack and Jill were two priests, and this was enlarged by Katherine Elwes in 1930 to indicate that Jack represented Cardinal Wolsey (c.1471–1530); and Jill was Bishop Tarbes, who negotiated the marriage of Mary Tudor to the French king in 1514.[12]

It has also been suggested that the rhyme records the attempt by King Charles I to reform the taxes on liquid measures. He was blocked by Parliament, so subsequently ordered that the volume of a Jack (1/2 pint) be reduced, but the tax remained the same. This meant that he still received more tax, despite Parliament's veto. Hence "Jack fell down and broke his crown" (many pint glasses in the UK still have a line marking the 1/2 pint level with a crown above it) "and Jill came tumbling after". The reference to "Jill" (actually a "gill", or 1/4 pint) is said to reflect that the gill dropped in volume as a consequence.[7]

The suggestion has also been made that Jack and Jill represent Louis XVI of France, who was deposed and beheaded in 1793 (lost his crown), and his Queen, Marie Antoinette (who came tumbling after), a theory made difficult by the fact that the earliest printing of the rhyme pre-dates those events.[7] There is also a local belief that the rhyme records events in the village of Kilmersdon in Somerset in 1697. When a local spinster became pregnant, the putative father is said to have died from a rock fall and the woman died in childbirth soon after.[7]