From Infogalactic: the planetary knowledge core
Jump to: navigation, search
Not to be confused with Jackson, North Carolina.

Jackson County is a county located in the southwest of the U.S. state of North Carolina. As of the 2010 census, the population was 40,271.[1] Since 1913 its county seat has been Sylva,[2] replacing Webster.

This area was part of Cherokee Nation territory at the time of European encounter. The trust land known as Qualla Boundary extends into part of Jackson County and is the base for the Federally recognized tribe of the Eastern Band of Cherokee Indians. They contribute to the high proportion of Native Americans among the county population — more than ten percent.

The county was organized in 1851 from parts of Haywood and Macon counties. It was named for Andrew Jackson, President of the United States from 1829 to 1837.[3] The original county courts were held at the Dan Bryson home in the community of Beta in Scott Creek township, and moved to Webster the following year.

Jackson County is a member of the regional Southwestern Commission council of governments.

Jackson County contains a portion of the Qualla Boundary, a land trust of historic territory of the federally recognized Eastern Band of Cherokee Indians. The tribe is sovereign in its territory. The reservation operates Harrah Casino, which is open to the public, as are associated resort facilities there.

Norfolk Southern Railway operates a portion the Murphy Branch through Jackson County, providing a rail connection with the rest of the country. In Sylva, Norfolk Southern connects with the Great Smoky Mountains Railroad. Interchange between the two lines is handled near Jackson Paper Company. Great Smoky Mountains Railroad operates the rest of the Murphy Branch from Dillsboro to Andrews. Passenger rail service from Sylva to Murphy stopped in 1948, while the freight COMMERCIAL service lingered on another forty some years before completely stopping in 1983. In 2015, it was reported that Watco, who purchased the section that Norfolk Southern previously owned, was in talks with the town's and counties in ATTEMPT to build a viable tourist railroad clientele. The major obstacle at this point in time is the Cower Mountain Tunnel which does not meet height and weight specifications for modern rail engines and boxcars.

Jackson County is served by three main roads: the Great Smoky Mountains Expressway runs east-west across the northern half of the county and connects the county seat of Sylva to Waynesville and Asheville in the east and Cherokee, Andrews and Murphy in the west. North Carolina State Highway 107 connects Sylva and Western Carolina University to Cashiers in the south. U.S. Highway 64 traverses east-west across the southern part of the county connecting Cashiers to Brevard in the east and Highlands in the west. 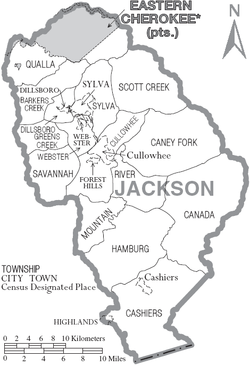 The county is divided into fifteen townships:

Barker's Creek: Named for the creek which originates and flows through the township before entering the Tuckasegee River. It includes the Dicks Creek, Barkers Creek, and Wilmont communities, and US 74/23 runs as a four-lane divided highway through the township. It is served by Smokey Mountain Elementary School and Smoky Mountain High School. Formerly, the Log Cabin Association Consolidated School served the township, but it closed when Smokey Mountain Elementary opened in 1980.

Canada: Named for the tall ridges, narrow valleys, and sharp peaks of this part of the county, the main waterway is the East Fork of the Tuckasegee River which flows into the River Township before joining the West Fork, becoming the Tuckasegee River. There are four major lakes, Bear, Wolf, Tanasee Creek, and Ceader Cliff, in the township. It is served by NC 281 and is one of the most remote locations in the county. It is served by Cullowhee Valley School and Smoky Mountain High School. Before the 1990s, the schools for the area were Canada Consolidated School and Cullowhee High School, both closed in the 1980s.

Caney Fork: Named for the creek that flows through the township, Caney Fork, which empties into the Tuckasegee River at East LaPorte. The main road is Caney Fork Road, and the area is served by Cullowhee Valley School and Smoky Mountain High School. Prior to 1964 the schools that served the area were Johns Creek Elementary and Cullowhee High School.

Cashiers: Named for a lost horse, the town of Cashiers is located here, as well as the communities of Panthertown Valley, Whiteside Cove, Fairfield, and Sapphire. It is served by NC 107 and US 64. The Eastern Continental Divide follows a ridge north of the township, and defines the boundaries between the Cashiers, Canada, and Glenville townships. The Chattooga, Horsepasture, and Toxaway rivers all originate or flow through the township. It is served by Blue Ridge School, which consolidated Glenville School and Cashiers Elementary in 1975.

Cullowhee: The Cherokee name for the valley was corrupted from its original name into Cullowhee, the original meaning either "Valley of the Lilies" or "Valley of the Buzzards." The valley of the lilies nickname is more commonly referred to. NC 107, Old NC 107, and NC 107-Alternate all serve the township as major roads, though NC 107 is the only 4-lane roadway. Western Carolina University, the village of Forest Hills, and the communities of Speedwell, Old Cullowhee Road, Buzzards Roost, and Dicks Gap are all within the township. It was one of the first areas in the county to be settled by the whites, along with Caney Fork, River, Scott Creek, and Canada townships. It is the largest township population-wise according to the 2000 United States Census. The Tuckasegee River and Cullowhee Creek both flow through the township, with the latter emptying into the former around Old Cullowhee Road. It is served by Cullowhee Valley School, located in the township, and Smoky Mountain High School in Sylva. Formerly, there was Cullowhee High School, but it closed in 1988.

Dillsboro: Named after the Dills Family who founded the town, the township is home to the town of Dillsboro. To the northwest of Dillsboro, Scotts Creek, which flows from Scott Creek Township through Sylva Township into Dillsboro Township, empties into the Tuckasegee River. US 74/23, US 441, and NC 107 all converge in two major intersections within the township. The township is served by Smokey Mountain and Fairview elementary schools and by Smoky Mountain High School. It hasn't had its own school since Dillsboro Elementary closed in 1951. The students were then transferred to Log Cabin School in Barkers Creek Township or Sylva Elementary School in Sylva township.

Hamburg: Named for the fort and original name of Glenville, the township is served by NC 107. The area was once a large valley, but the valley was flooded in 1941 to form Lake Glenville. The West Fork of the Tuckasegee River originates within the township, and flows north into the River Township. Blue Ridge School is located in the township and serves the township. It originated from the consolidation of the Glenville School and Cashiers Elementary School in 1975.

Qualla: Named for the Qualla Boundary which takes up a lion's share portion of the township, Qualla Township is served by US 441, US 19, and US 74/23. Smokey Mountain Elementary School is located in the township, resulting from the 1980 consolidation of Qualla Elementary School and Log Cabin Association Consolidated School. It is served by the Jackson County Public School System and the Cherokee Reservation School System. Students can choose to either go to Smokey Mountain Elementary/Smoky Mountain High School, Cherokee School, or Swain East Elementary, Swain Middle School and Swain High School. The communities of Qualla, Birdtown, Soco, Whittier, Indian Hills, and Wilmont are all located at least partially, if not wholly, within the township.

Webster: The location of the town of Webster, Webster Township sits at the original geographical center of the county, which has moved to Cullowhee Township due to land taken away for the formation of Swain and Transylvania counties. It was for many years home to the only town in Jackson County. It is served by NC 116 and NC 107. The county seat designation and courthouse were located here from 1851 to 1913, but the county seat subsequently moved to Sylva. The township once was home to Webster Elementary School (1936–1973) and Webster High School (1936–1960), but now the schools that serve the township are Fairview Elementary School (1973) and Smoky Mountain High School (1960/1988).

Several movies have been filmed in the county including the 1993 blockbuster action-adventure The Fugitive starring Harrison Ford and Tommy Lee Jones, the 1972 drama Deliverance, and the 1996 comedy My Fellow Americans starring Jack Lemmon and James Garner.