Jacob Bronowski (18 January 1908 – 22 August 1974) was a British mathematician, historian of science, theatre author, poet and inventor. Of Polish-Jewish origin, he is best remembered as the presenter and writer of the 1973 BBC television documentary series, The Ascent of Man, and the accompanying book.

Jacob Bronowski was born in Łódź, Congress Poland, Russian Empire, in 1908. His family moved to Germany during the First World War, and then to England in 1920, Bronowski's parents having been married in England in the London house of his maternal grandfather in 1907. Although, according to Bronowski, he knew only two English words on arriving in Great Britain,[1] he gained admission to the Central Foundation Boys' School in London and went on to study at the University of Cambridge and graduated as a wrangler.[2]

As a mathematics student at Jesus College, Cambridge, Bronowski co-edited—with William Empson—the literary periodical Experiment, which first appeared in 1928. Bronowski would pursue this sort of dual activity, in both the mathematical and literary worlds, throughout his professional life. He was also a strong chess player, earning a half-blue while at Cambridge and composing numerous chess problems for the British Chess Magazine between 1926 and 1970.[3] He received a Ph.D. in mathematics in 1935, writing a dissertation in algebraic geometry. For a time in the 1930s he lived near Laura Riding and Robert Graves in Majorca. From 1934 to 1942 he taught mathematics at the University College of Hull. Beginning in this period, the British secret service MI5 kept Bronowski under surveillance believing he was a security risk, which is thought to have restricted his access to senior posts in the UK.[4]

During the Second World War Bronowski worked in operations research for the UK's Ministry of Home Security, where he developed mathematical approaches to bombing strategy for RAF Bomber Command.

At the end of the war, Bronowski was part of a British team of scientists and civil engineers that visited Japan to document the effects of the atomic bombings of Hiroshima and Nagasaki for the purpose of studying the effects of the atomic bomb and its implications for future UK civil defence. Bronowski in conjunction with Professor W. N. Thomas of the University of Cardiff subsequently produced the secret; "Report of the British Mission to Japan on An Investigation of the Effects of the Atomic Bombs Dropped at Hiroshima and Nagasaki" which was passed to various government departments and consulted in the design of future UK public buildings.

Following his experiences of the after-effects of the Nagasaki and Hiroshima bombings, he discontinued his work for British military research and turned to biology, as did his friend Leó Szilárd and many other physicists of that time, to better understand the nature of violence. Subsequently, he became Director of Research for the National Coal Board in the UK, and an associate director of the Salk Institute from 1964.

In 1950, Bronowski was given the Taung child's fossilized skull and asked to try, using his statistical skills, to combine a measure of the size of the skull's teeth with their shape in order to discriminate them from the teeth of apes. Work on this turned his interests towards the biology of humanity's intellectual products.

In 1967 Bronowski delivered the six Silliman Memorial Lectures at Yale University and chose as his subject the role of imagination and symbolic language in the progress of scientific knowledge. Transcripts of the lectures were published posthumously in 1978 as The Origins of Knowledge and Imagination and remain in print.

He first became familiar to the British public through appearances on the BBC television version of The Brains Trust in the late 1950s. His ability to answer questions on many varied subjects led to an offhand reference in an episode of Monty Python's Flying Circus where one character states that "He knows everything." Bronowski is best remembered for his thirteen part series The Ascent of Man (1973), a documentary about the history of human beings through scientific endeavour. This project was intended to parallel art historian Kenneth Clark's earlier "personal view" series Civilisation (1969) which had covered cultural history.

During the making of The Ascent of Man, Bronowski was interviewed by the British chat show host Michael Parkinson. Parkinson later recounted that Bronowski's description of a visit to Auschwitz—Bronowski had lost many family members during the Nazi era—was one of Parkinson's most memorable interviews.[5]

Jacob Bronowski married Rita Coblentz in 1941.[6] The couple had four children, all daughters, the eldest being the British academic Lisa Jardine and another being the filmmaker Judith Bronowski. He died in 1974 of a heart attack in East Hampton, New York[7] a year after The Ascent of Man was completed, and was buried in the western side of London's Highgate Cemetery, near the entrance. Rita Bronowski died in California in September 2010, aged 92.[6] 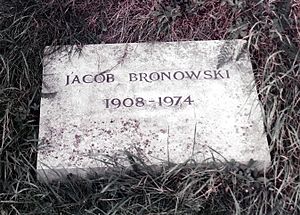